THE WORLD'S OLDEST GYM IN IRAN

by Lightfoot
In the time of the Persian Empire, zurkhanehs were dedicated places to train men as warriors and to instill in them a sense of national pride in anticipation of upcoming battles. Today, no more than 500 of these traditional training rooms remain in Iran, fewer than 20 in Tehran. Local athletes have taken action to preserve this heritage and to pass it onto future generations. Jeremy Suyker discovers the world’s oldest gym

One freezing winter’s night, down a remote and narrow back alley, loud sounds of drums and a metallic roar erupt from a non-descript house behind Tehran’s Grand Bazaar. Its unmarked door gives way to the surreal world of the zurkhaneh [ancient Iranian gym]. Such places—reserved exclusively for men—are not easily accessed by foreigners. But with the help of an Iranian friend and a little patience, it’s possible to approach these people and be accepted among them.

Zurkhanehs are holy places for the athletes practicing varzeshe pahlevani, an ancient sport combining bodybuilding, moving skills, music, dramatic art, and religious worship. In this centuries-old ritual, men perform rhythmic movements with great passion, using tools that symbolically represent ancient weapons. At first, their strong devotion might seem overdone, but it soon becomes clear that it is a fundamental aspect of the pahlevani ceremonial rites. 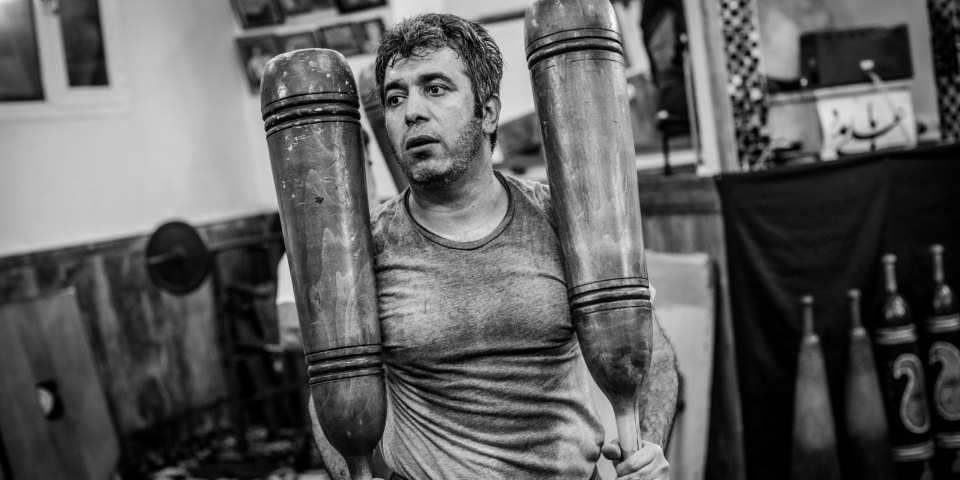 Training at Talachi zurkhaneh usually starts after 6pm. This is when the participants finish work and meet at the gym. Pahlevani operates very much like a ritual ceremony. The athletes remove their shoes and wash their hands when entering the training room. And before each session they sit together and drink tea.

The zurkhaneh plays an important social role for these men; it’s a place to discuss politics, religion, and soccer. Most athletes have known each other for years and feel at ease expressing themselves inside the zurkhaneh. Their cultural and social backgrounds suggest that they are inclined to share the regime’s values. Undoubtedly, they hold in admiration the Ayatollah Khomeini, the founder of the Islamic Republic, and respect his moral heritage. And like the majority of Iranians [at the time of writing] were looking forward to ending the sanctions that are weakening the country’s economy. 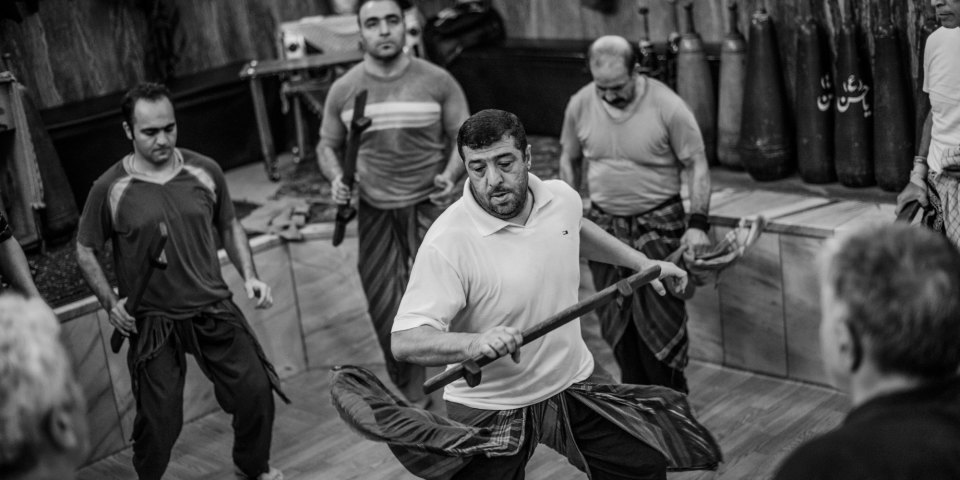 But any political conversations end as soon as the morshed (guide) begins to play. As master of ceremony, the morshed sits overlooking the group, he bangs upon the zarb (drum) and conduct the rhythmic music. The athletes then enter the arena and start moving in unison to his drumbeats.

The main portion of a varzeshe pahlevani session is dedicated to weight training, notably using a pair of mil (wooden clubs), sang (metal shields), and a kabbadeh (bow made of iron with metal rings and coin-like pieces hanging from its body). Each such piece weighs some 44 pounds. This part of the training is followed by exercises like Sufi whirling and juggling, which are intended to build strength as well as reinforce the virtues of sportsmanship, modesty, humbleness, and all while avoiding arrogance. 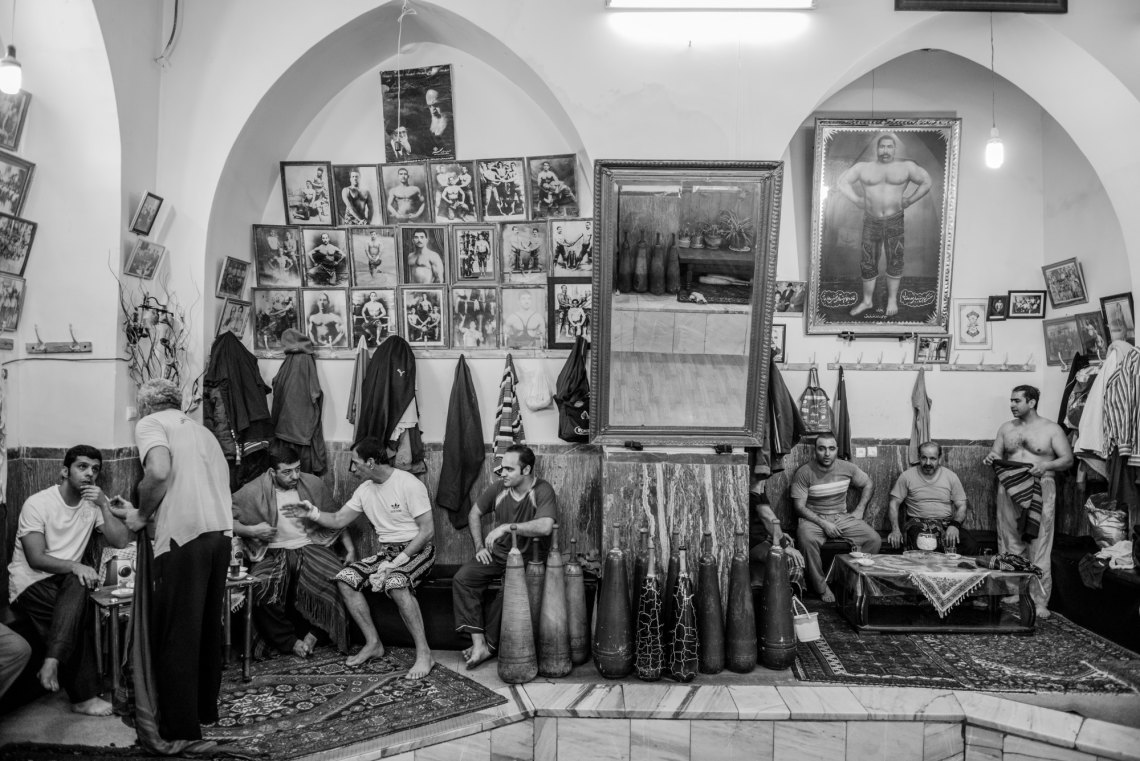 Traditionally, the zurkhaneh demands no payment from its athletes and instead depends on public donations. In return, the zurkhaneh provides community services and protection. All those who attend are strong believers in Allah and praise him and the Prophet Mohammad repeatedly during each session.

They also pray for the good health of each participant and his family, regardless of his social rank, wealth, or religion. Indeed, varzeshe pahlevani itself fuses elements of pre-Islamic Persian culture with the spirituality of Shia Islam and Sufism. This unusual religious blend is a reflection of the great mix of ethnic groups, languages, and cultures that coexist within Iranian society. 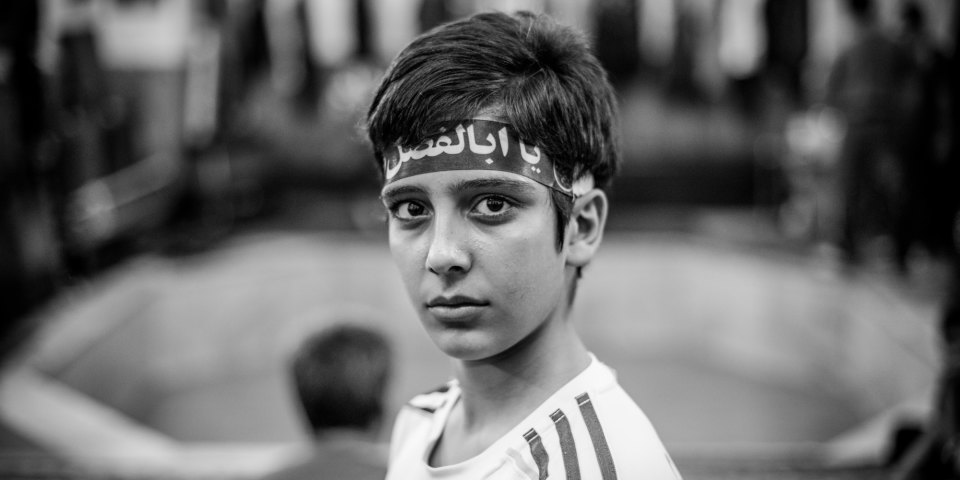 Talachi zurkhaneh is far more than a theatrical centre for synchronized wrestling. This is where a group of men perpetuate a sacred heritage they pass onto future generations—as it has been passed on to each of them. Indeed, fathers, as “masters,” transmit skills and manners to their sons, as well as essential moral values. Most of these athletes are simple men living ordinary lives. They are postmen, butchers, shopkeepers, or taxi drivers.

But when they enter a zurkhaneh, a transformation takes place. They become fighters, singers, worshippers, and poets. This gripping metamorphosis can also be seen as an echo of the remaining pre-Islamic culture and its strong legacy in modern Iran.

You could say that you skied in Europe last winter, or you could say Iran… Claire Turrell visited the resort that com...