The soulful music from a folk band fills the arena. Their rustic costumes highlighted by orange lights that illuminate the stage. Chocolate-coloured fabric has been draped over platforms that sport trees which appear to have been stripped bare. The look is only softened by the white puffy “clouds” that hang overhead creating a dreamy sky. And if you were under any doubt that you were about to be treated to a night of fashion meets drama, a man wearing huge articulated wings then drops in from the sky…

TSB Arena in Wellington is usually a basketball stadium, but for a few weeks each autumn, the court transforms into the home of WOW—the World of Wearable Art. New Zealand’s most significant arts event and competition, which celebrated its 30th anniversary in 2017, encourages contestants to “take art off the wall and adorn the human form”. Competitors travel from as far away as Hong Kong, China, Australia, Poland, United Kingdom and the United States to push the limits of design and create an array of breathtaking pieces. No wonder that it attracts more than 55,000 visitors from around the globe.

Former guest judge and President of Time Warner Mark D’Arcy said, “The WOW awards show makes Lady Gaga look like a librarian, and has more originality and creativity per minute than any show I’ve seen.” I saw Lady Gaga perform live in Las Vegas and her costumes definitely take some beating so I’m keen to see if WOW really lives up to the hype. 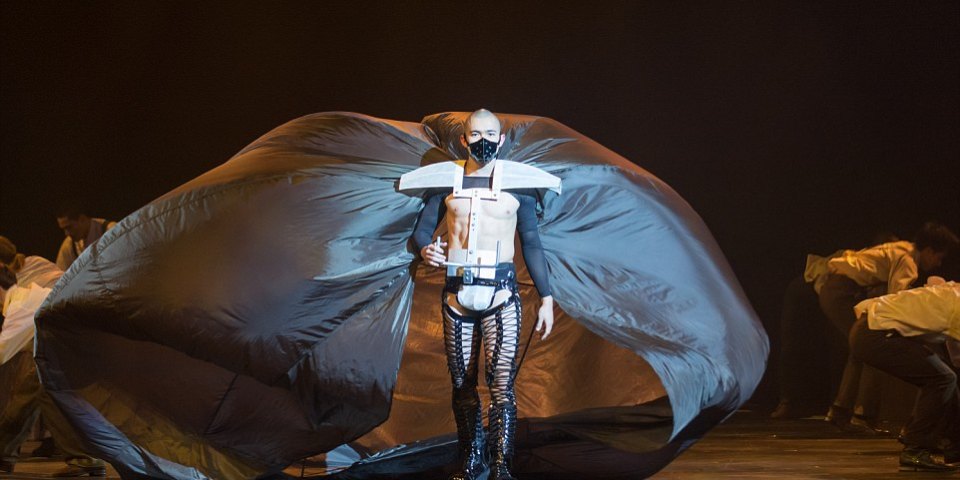 The WOW website promises a “glorious rebellion against the mundane”. More than 120 designers and fashion students have entered costumes into the competition. For the next two hours, I’m exposed to sensory sanctuary. WOW proves to be a mash-up of Cirque du Soleil (who sponsor one of the categories), a haute couture show and a psychedelic journey down the rabbit hole with Alice in Wonderland. And if to emphasise my point they really did have a dancing lop-earred silver rabbit, and an oriental-style Queen of Hearts’ costume sculptured from playing cards take to the stage for the first act.

The show starts with the children’s theme – featuring said lop-earred rabbit and then takes us through four other acts: Other Worlds, Architecture, Avant-garde and Aotearoa (Maori word for New Zealand). Time suspends as we journey through between-section skits by homegrown comedians Trygve Wakenshaw and Jimmy James Fletcher, and through dramatic scenes a la Cirque du Soleil that needs no narration nor has language barriers. We are treated to vivid soundscapes and vibrant, pulsating lighting, and death-defying acrobatics. The music helps guide us through each act as it matches the atmosphere of the scene. Creative director Jason Smith later tells me, “I really enjoyed the scale of the production and the fact that music is such a strong feature. As a soundtrack composer I am usually required to support and enhance a dialogue driven story, but with this show, music is front and centre. That was both a challenge and an exciting opportunity.” 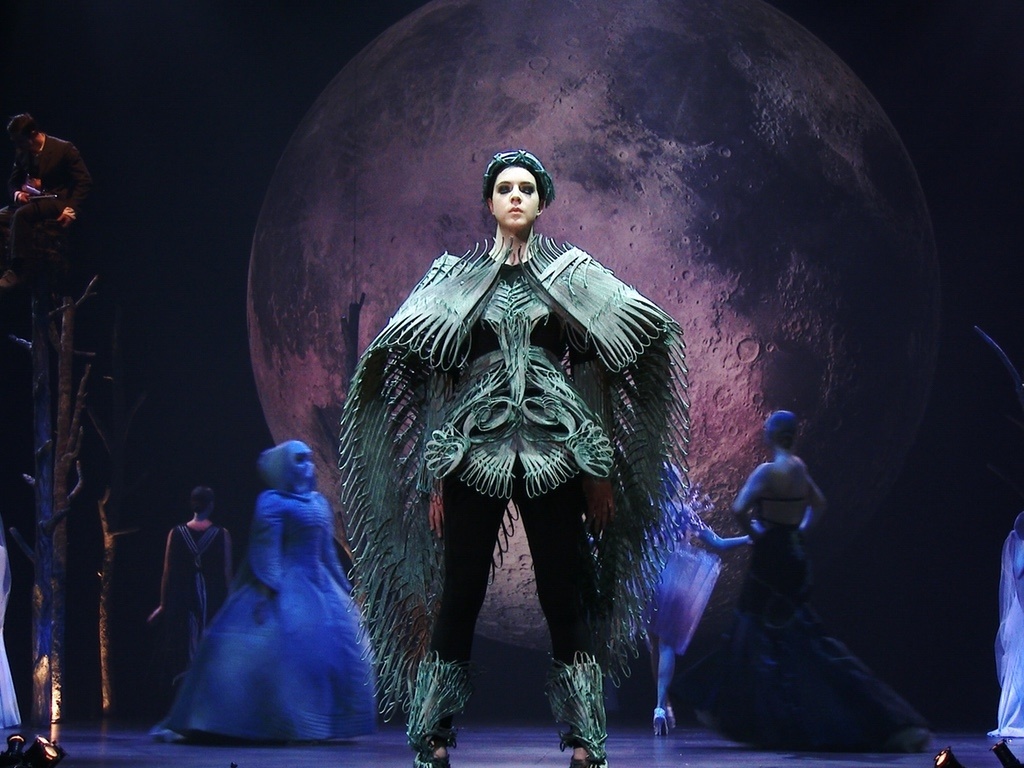 However, the music needs to be powerful to compete with the costumes that take to the stage. From the tropical-looking Perspex piece ‘Kaleidoscope’ by Tess Tavener Hanks that glows when the model takes to the stage, to the wire and aluminium creation ‘Tinker’ by Jeff Thomson that pays homage to the Slovakian tinkers who would go from house to house wearing the tools of their trade and ‘The Piper of Lights’ by Chris and Gary Wilson, who own a glass studio and reinvented the uniform of an army piper with a striking glass uniform.

With the famed Weta Workshop also on board as one of the sponsors, offering the most theatrical prizewinner an internship, several of the costumes had blockbuster appeal.  Japan’s Scott Sutcliffe sent his Bane-like ‘Apocalyptic Warrior’ down the catwalk wearing gladiator-style boots, a billowing cape and a look that is sure to terrify Batman. While ‘Flow of Creation’ by Kirsten Fletcher from the UK features a 3D cape that curls around the model like a cobra.

Other scene stealers include the neon fringed ‘The Stitch Witch’ by Sarah Seahorse and Luna Aquatica from Australia, and ‘Starship Girl’ by US designer Julian Hartzog with its futuristic and Star Trek-worthy outfit. But it is the fiberglass, steel and wood gravity-defying dress ‘Diva’s Dreamscape’, by New Zealander Peter Wakeman that steals the show, the judges’ hearts and the NZ$30,000 supreme award prize. WOW founder Dame Suzie Moncrieff says the entry has “a strong simplicity that works from every angle. The use of such hard materials creates a sophisticated garment that demonstrates great skill and creative ability” and that the entry captured the year’s theme of connecting architecture and fashion. Although Wakeman reveals that this win didn’t come easily as his winning piece took 400 hours of work to put together. 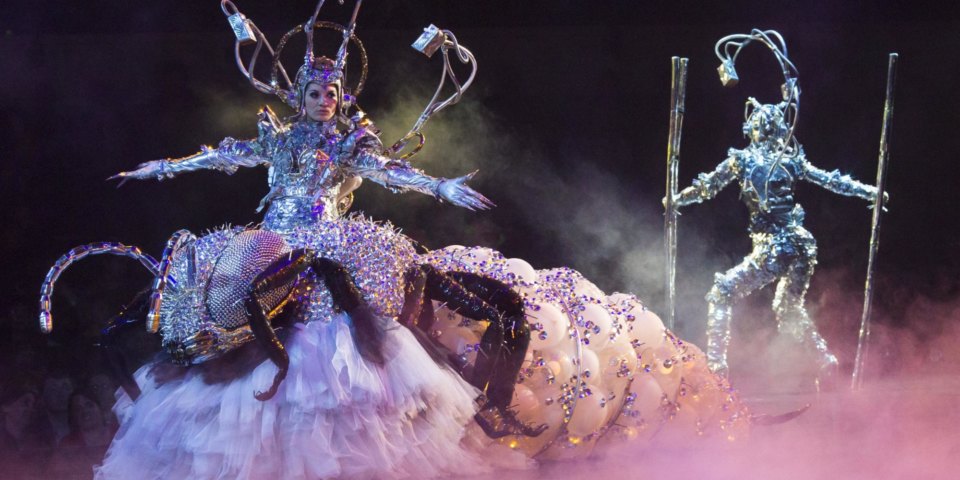 WOW has been called a “choreographed collision” and many other things, but mostly, its message is one of creativity and the magnitude of the imagination. As the curtain fell on the stage, I was soon to find out that this was just the first act as the World of Wearable Art would now go on tour all over the world. They would be showing this year’s winners alongside previous stars. Moncrieff said that WOW is, “a unique onstage spectacular that will inspire us all.” And I have to agree, the creative energy of WOW is contagious.