It was a triathlon that brought me to Jeju Island, but it was a group of elderly female divers that will make me remember this trip forever.

As a triathlete and photographer I am always looking for a great place to train when I’m on shoots, and an interesting place to photograph when I’m attending races. When I knew that I was going to Jeju Island, I started researching the area. I was immediately transfixed by the island’s beauty, but it was a group of inhabitants that really caught my interest. I stumbled across a piece about the Haenyeo women who freedive for abalone and shellfish to help support their families. These women the last of their kind. However, they are so loved by their fellow countrymen that the government asked if they could be added to UNESCO’s Intangible Cultural Heritage list.
I knew that when I was on this island I had to take this opportunity to document these strong, amazing women. As soon as I arrived on the island I went straight to the Jeju Island Tourism counter to find out how I could get in touch with them.
Almost every village [on Jeju] has its very own group of Haenyeo women. Each community has built a small house for them, where the women can get ready, change, store their belongings, or to just relax and take breaks between dives. You’ll often find the women chatting in groups inside or around the house. I showed up at the site location at 5.30am, before the divers arrived, so I could photograph them as they prepared for the dive and got the boat ready.

It wasn’t long before they started to arrive for their work day. Some pulled up to the dive house on their scooters, others were dropped off by their husbands, while the divers that lived close by just chose to push carts containing all of their equipment to the dive house.

I joined them for two dives. We went to Hyeopjae Beach that’s at the foot of a small, sleepy village and Seongsan Port, which is close to Korea’s first UNESCO Natural World Heritage site Seongsan Ilchulbong (Sunrise Peak). It’s a must-do for tourists as it’s the perfect place to watch the sunrise. The first trip was rather short as it was rather cloudy. But the second trip on the boat, it was spectacular and I managed to get a good view of the island. 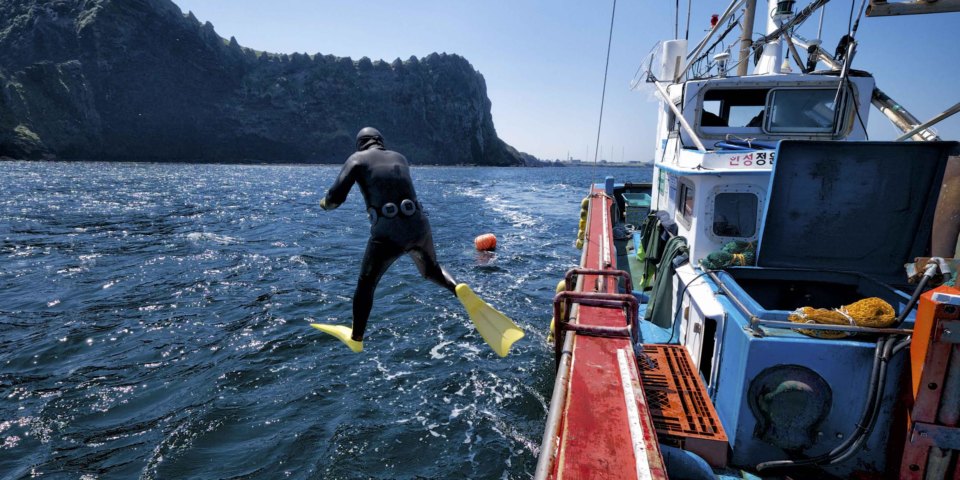 The atmosphere on the boat was very relaxed and calm. While a few divers stayed quiet, most of them were kicking back and having a laugh together. The women who were all aged roughly between 40 and 80 were itching to get into the sea. Many of them had started in their late teens and were very familiar with the ocean – it felt like just a regular work commute.

As we made the short trip out to the dive site, the divers started making their final adjustments to their wetsuit and cleaning their masks. They showed me how they prepare their mask with a lotion mixed with vegetables and vegetable oil in order avoid any fog in the mask.

As well as the face mask, dive suit, fins, neoprene hood and weight belts, the Haenyeo women carry a number of tools with them on each dive. They each carry a bitchang (a flat prying tool akin to a heavy dull knife blade); a jonggae-homi (a small sickle for cutting seaweed), a broad bladed knife for removing sea urchins; and a gol-gengi (a small hoe for pulling creatures like octopuses or sea cucumbers) from crevices in a reef. 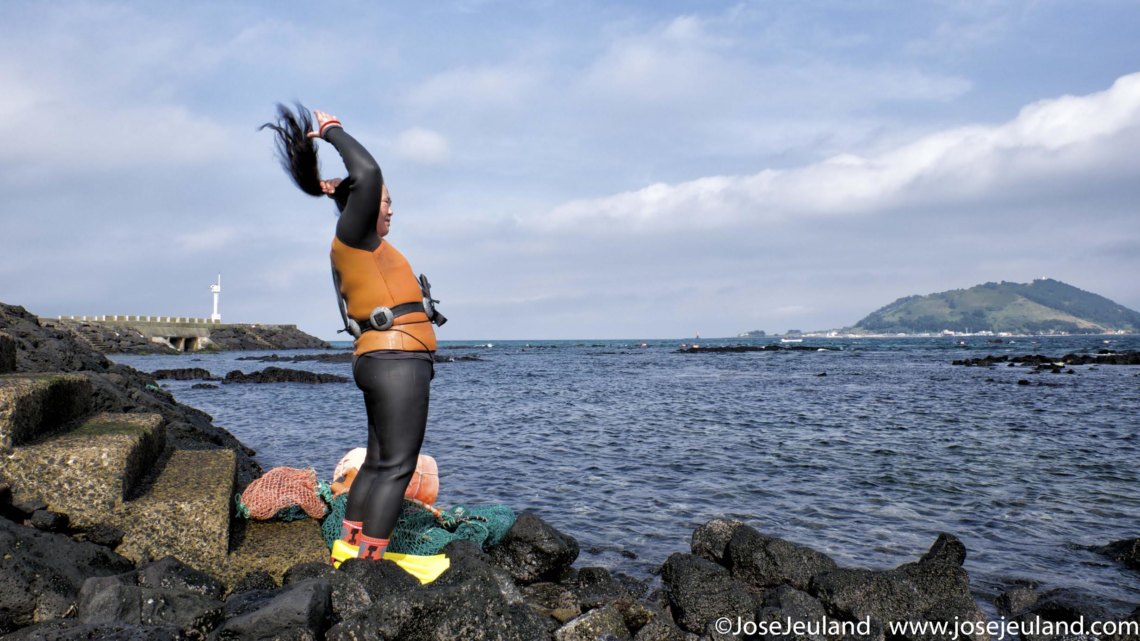 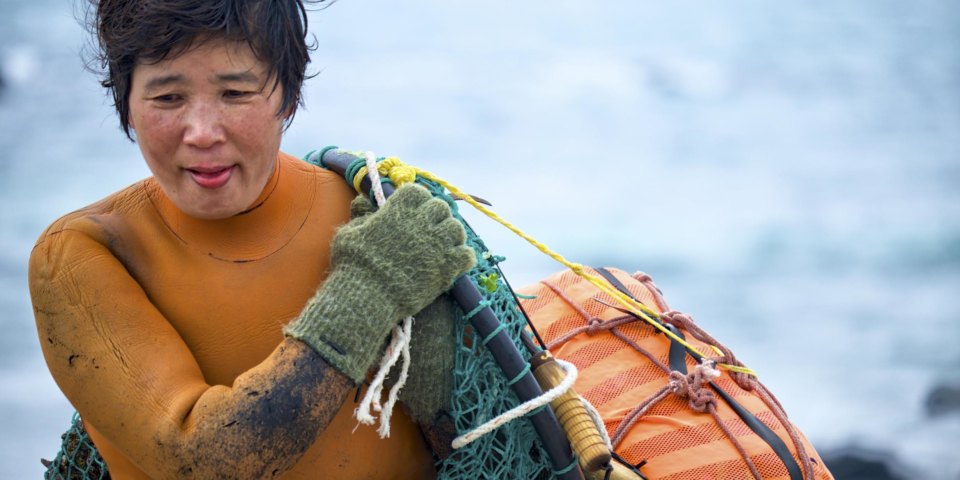 Jeju divers are highly skilled and require a great degree of physical fitness. They can freedive up to a depth of 20 minutes, and can stay underwater for up to three minutes. Most of the women on the boat were underwater for over two minutes, though there were a few more skilled divers who stayed down for longer.

When they finally come up for air and break through the ocean’s surface, their expelled breath makes a high-pitched whistling sound, much like a dolphin. It’s cold, hard and dangerous work, but these women have a connection with the sea that many of us in the modern world have lost.

I chose not to dive into the deep with them as I wanted to stay on the surface of the ocean to observe what the women were doing.

However, the divers were still keen for me to try some of their catch, which featured turban snails, sea urchins, gelidium algae, sea cucumbers, abalone and undaria seaweed. It was so fresh, especially the shellfish. The seaweed that they’d scooped from the surface of the sea was so fresh and cold – it was delicious. 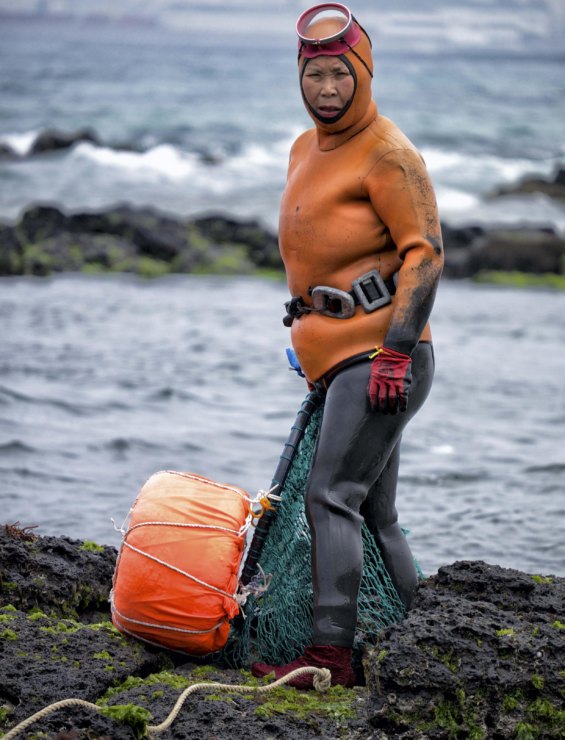 As well as looking after their dive kit, to make sure that the dive went as smoothly as possible, the divers would take a pill to help control the headaches that can be brought on by the water pressure and they would also constantly keep a lookout for each other as soon as they hit the water.

Every dive is a roll of the dice. Not only is it cold, the divers face strong currents and poor visibility. You could very easily be washed out to sea, or be caught in a rip-tide and drown. In fact, when I returned to my hotel after the diving experience, I learnt that one of the divers, a woman aged 80, had drowned on the trip.

The women are athletes. They work so hard for their catch on each dive. There may be some people who think that it isn’t appropriate for women their age to work in such grueling conditions, but I don’t see it that way. These women are healthy and enjoy what they’re doing. I’d rather be like them, and stay fit into my old age, than to be inactive. It’s dangerous, and challenging, but these women are showing the rest of the world how they live life to the full.

We reveal the trips that are guaranteed to make a splash 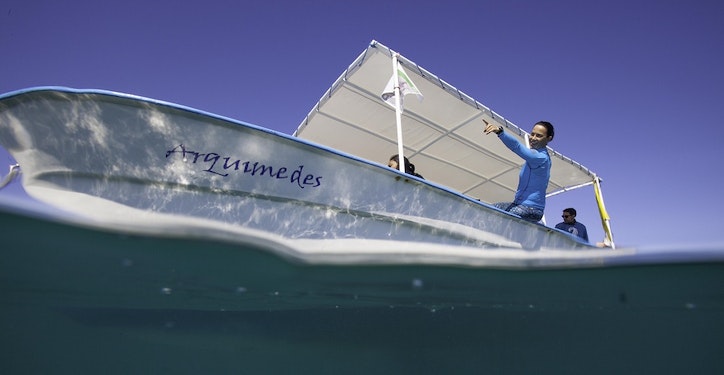 We speak to the multi-hyphenate freediving champion, environmentalist and charity worker Hanli Prinsloo