TREKKING THROUGH THE SINAI DESERT

"Bedouin tents are three sided," explains Sheikh Ahmed Abu Rashid. "One side is always open - it means everyone is always welcome."

I met the Sheik in the shade at Fox Camp, the hiking headquarters for the Saint Catherine's region of the south Sinai Desert. He was dressed as you'd imagine a Sheik might - a long white robe that stopped just above a pair of well-made leather sandals; his head covered by a white gutra (cloth), held in place by a black agal (rope).

The Sheik, like most Bedouin men, used to be a desert guide. His knowledge of the desert is as respected as his word in Bedouin law - which made him an essential player in the creation of the Sinai Trail, a 550 km hiking trail that crosses the South Sinai desert. The Sinai Trail revives old pilgrimage and smugglers routes, ancient tribal alliances, and bit by bit, is bringing tourists back to this beautiful, historic region.

It's also what brought me to this desert trail, along with and 15 other hikers from seven different nations. We were all here to walk what might just be the longest trek in the world without a single signpost. 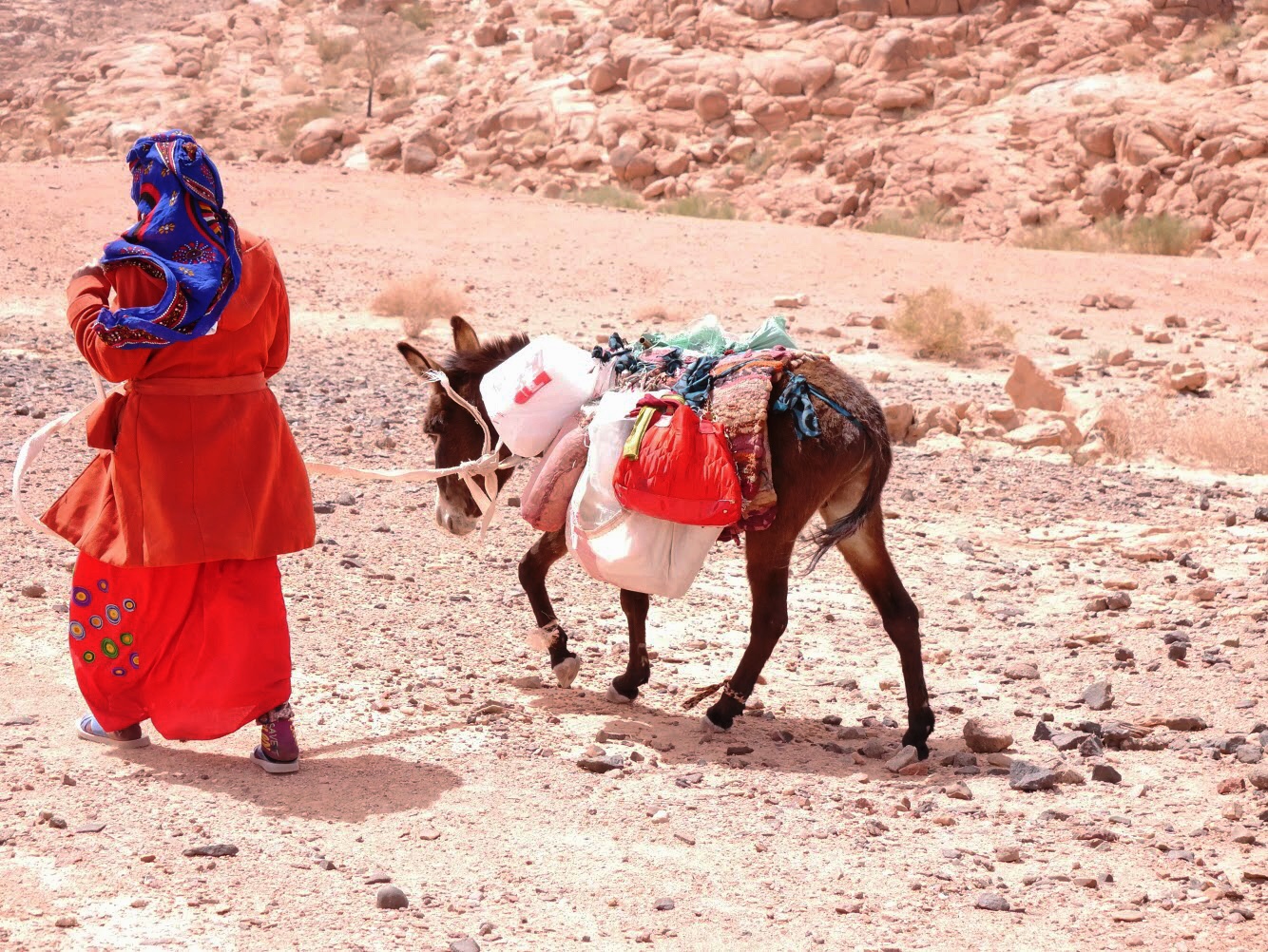 We woke early, the sun barely above the horizon. The gentle shuffling of sleeping bags and the soft simmering of Bedouin tea on the fire were the only discernible sounds. After a breakfast of fruit, eggs, Bedouin bread and ful mudammas (a traditional fava bean breakfast stew), we began walking. In the quiet of the morning, our group outlined itself against the mountainous desert landscape.

Blisters aside, our days carried on in an easy rhythm. Walking in the cool mornings, then stopping to escape the heat of the midday sun before continuing on again in the afternoon until sunset. Then we would stop and make camp, have dinner and listen to stories of the Bedouins and the desert by firelight.

The trail isn't exceptionally taxing. Most of the route is fairly level, and in general, everyone walks at their own pace. Walking is a meditation. There's plenty of people around to talk with, but it's also easy to hang back and breathe in the desert landscapes on your own. There's a certain peace inside of the endlessness, the emptiness. Yet with the Bedouins, you'll find the desert is rich with more than you can imagine.

Walking along side my Bedouin guides I quickly learned that everything you need can be found in the desert. A lemony-flavored arugula like plant helps to quench your thirst; a rosemary-looking plant mixes with water to make soap suds; and the root of another plant is used as lipstick. Yet with all the secrets the desert holds, what surprised me most is how much water there is, if you only know where to look.

Shortly after leaving the Hamada tribe near the Gulf of Abqua, we came across a field of chamomile flowers that had sprouted after the spring rains. Stretches of tiny white and gold flowers covered the vast sandscape, with the el-Tih plateau in the backdrop, a limestone ridge that divides the south Sinai (where it's safe) from the north (where it's not safe). A few Bedouin families had left their villages to graze their goats in the fertile spring desert, returning to their nomadic roots. We stopped to have tea in their tent, and I was surprised how warm it was inside. I took off my jacket and sat down in the round room, and immediately had a tiny cup of sugary tea in my hand. 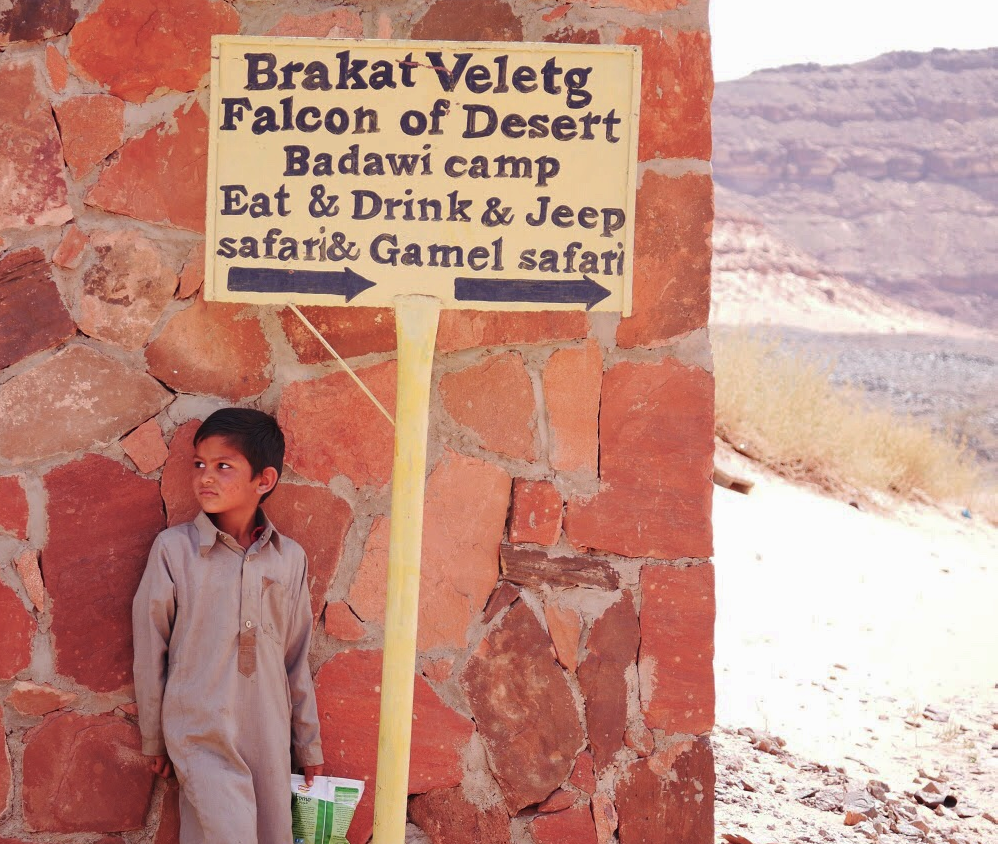 It's the only kind of tea the Bedouins drink, so it has no special name. No matter where you stop though, you'll always be received with a cup of tea, as Bedouin hospitality dictates.

Bedouin hospitality is a serious thing. According to their law, If you arrive in a Bedouin village from the desert, you may stay for three days, no questions asked.

"For three days you eat, rest, and sleep," explained the Sheik when we were back at camp. "No one asks you who you are, why you're here, or where you are going. After three days pass, then they can ask."

Most of the tribes are descents from a mix of Romanian nomads and Egyptians from the western lands. They've been leading pilgrims across the desert for generations, to Mecca, Jerusalem, or beyond. The Bedouins have always lived off the land, trading goods between tribes from different regions - dates from the highlands for camel milk or fish from the coastal tribes. If they needed money they'd sell goats or camels that the women raised in the mountains, and for the last 35 years, the men worked leading tourists through the deserts.

Yet as Egypt's political situation upended, tourism waned and the need for guides diminished. Men were forced to leave their homes to work in the mines, or leave the desert all together to become taxi drivers in the city. In an oral cultural such as theirs, young men leaving the desert meant risking the loss of thousands of years of desert wisdom. 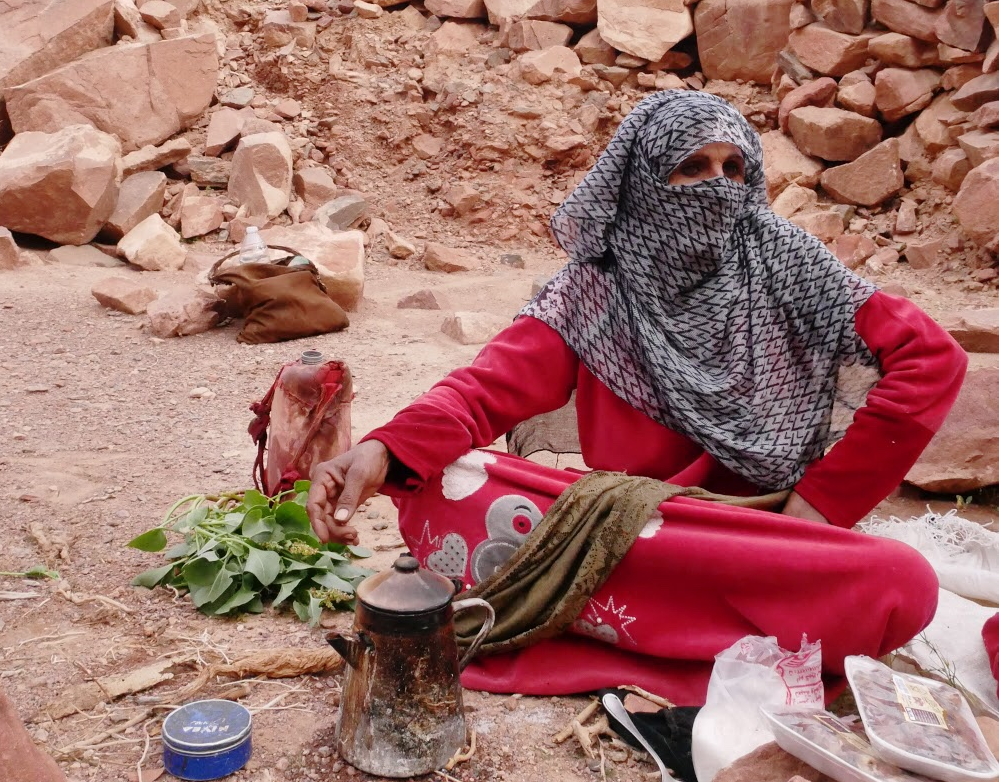 Strangely enough it was an idealistic Englishman named Ben Hoffer who would change the course of fate. Hoffer had arrived in the desert more than a decade ago, quickly developing a fascination with Bedouin culture and hiking extensively in the region. He met Faraj Mahmoud of the Jabalaya tribe on a mountaintop near Saint Catherine's.

Hoffer told Mahmoud about his dream to create a trekking route across the Sinai, and to Hoffer's surprise, Mahmoud agreed to help.

"Faraj's role has been very much like a diplomat, building bridges between tribes," explains Hoffer. A role he executed with the help of the Sheik, a lot of patience and a lot of tea. The trail eventually joined together eight different tribes, renewing a tribal alliance that hadn't been in effect for more than 100 years.

The final product is a 550 km, 42-day hike across the entire Sinai Peninsula. Trekkers can join for any portion of the trail - from two days to the entire 42, with many opting for seven-to-15 day stretches. 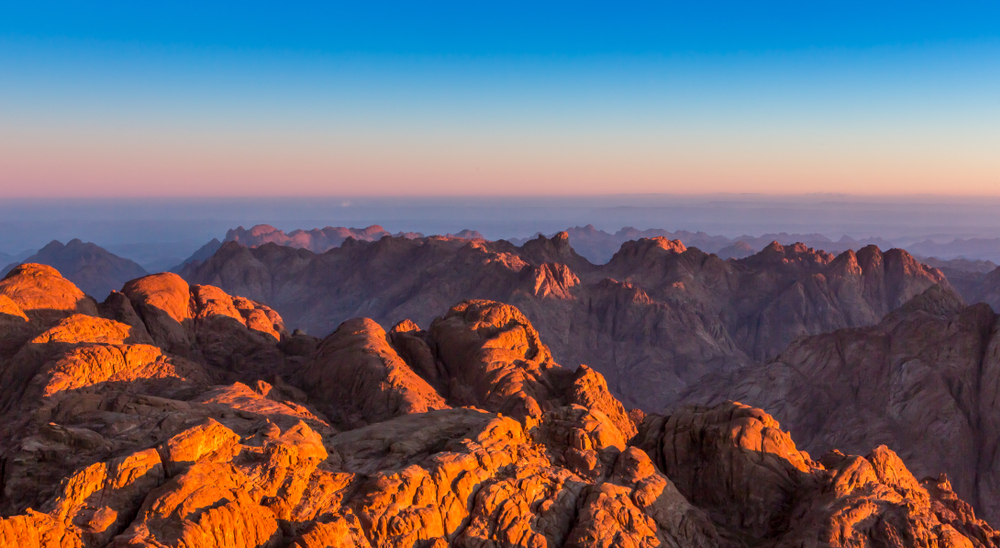 Mahmoud helped Ben realize his dream, although he admitted to not truly believing in it until people started showing up. But he does believe in the power of the desert.

"All people have problems. Talk to them - they all have them," he philosophized one day as we were walking in the mountains. "You won't solve your problems sitting in your house. The desert is the medicine you need to forget everything. In the desert, you think about the stars, and the moon. It's like a meditation. After the trip people change their lives. The desert is strong."

It was a sentiment that was echoed by the hikers themselves.

"Being able to disconnect is amazing," explained Ayah Safwat, an young Egyptian technical engineer with whom I became friends with during our time on the trail. "There were times when I was thinking about nothing. I'm a person who suffers from overthinking."

For many of us, including Safwat, it was also an immersion into a life we never thought we'd experience, that brought us closer to people we may have never had the chance to meet.

"Everyone should do this once in their lives," she said, reflecting on her time on the trail. "I feel so much more grateful for the life that I have."

A Journey Through Mystical Yunnan

A HISTORY LESSON FOR KIDS ON THE NILE

Theodora Sutcliffe and her son set sail upon a felucca ready for an adventure that would take them back in time ... 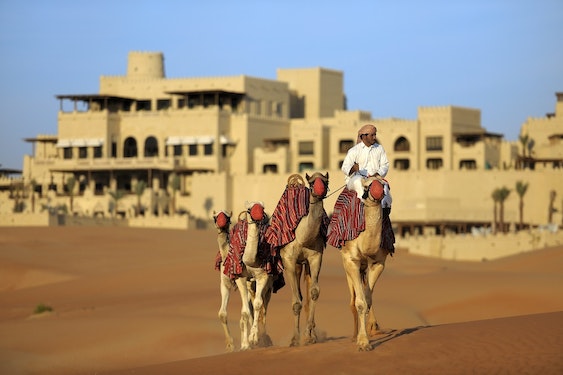 If you are looking for a little R&R, head between the dunes to find one of these hotels