TREKKING THROUGH THE MOUNTAINS OF SAPA

The rattling train pulled on the brakes and the carriages bundle up against each other like pedestrians who were busy looking at their phones. Our basket of goodies that they’d left for us in the cabin was now just filled with empty wrappers. However, it had been a long journey. Well, not a long one, a slow one. Scooter drivers and their passengers would keep pace with our carriage window, waving wildly at the foreigners who were heading towards their home. If it was a bullet train we probably could have been there before sunset, but this night-train wasn’t in a hurry, and arrived in the mountain town of Sapa just after breakfast.

Our guide met us from the station. As we hiked across the tracks, he told us that he would collect us from our hotel the next morning and we would start our trek up the mountain.

The following day we set off with our Vietnamese guide who could speak the local Hmong dialects and our Hmong porters. We were also joined by an elderly Hmong lady who after I said ‘good morning’ to her she decided that she would come along for a stroll. As we started to hike up the first incline, the octogenarian kept pace with us. Our guide was keen to leave her behind as he didn’t want her to get injured. However, it was as if she had eaten magic beans because she was matching us step for step. Eventually she got bored, and broke away from the pack, but if she was an example of the Sapa people, they are a force to be reckoned with. 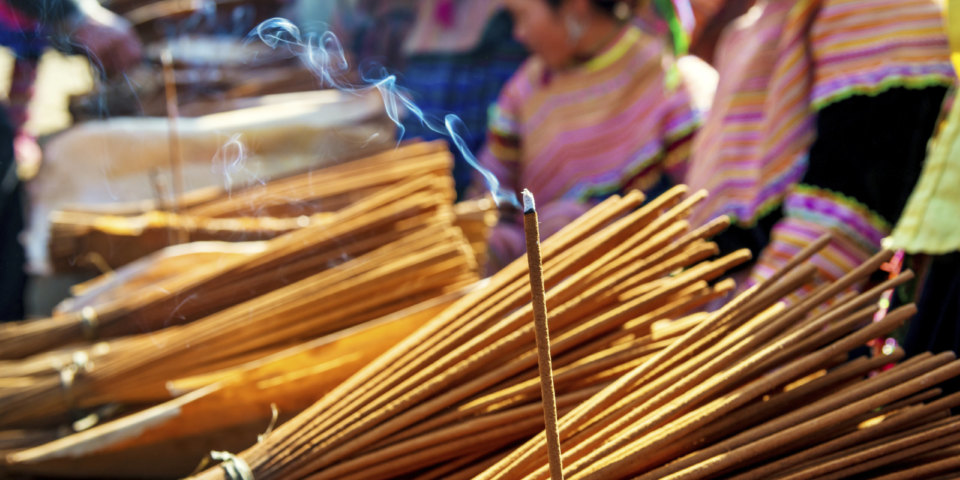 THEY LOOKED MAGNIFICENT. THEIR STARCHED RED HEADPIECES SHONE OUT AGAINST THE BLUE SKY AND THEIR GOLD JEWELLERY GLITTERED IN THE SUN

During the first lunch stop, one of the two porters threw us a quizzical look. He was confused why on earth we would want to hike over the mountains when we could have surely hired a car. My husband tried to use the George Mallory quote ‘Because it’s there’ and this confused him all the more. It was clear he thought we were nuts, rolled his eyes and strode off in his Crocs at a cracking pace while continuing to hump our belongings over his shoulder up the mountain.

However, when we got to our first homestay, even the porter must have been able to see what brought us there. We were staying with the local policeman whose family home was set on a clifftop looking over the rice paddy field quilted valley.

After dinner we swapped tales and I asked the family about growing up in Sapa. The policeman and I were about the same age. While I had spent my youth watching kids TV and taking ballet lessons, he had been hunting bears. There were no more bears wandering around the mountains of Sapa, just a few pot-bellied pigs that I had to be careful not to trip over when I went to the bathroom.

Leaving the policeman and his family behind, we then started to get further and further into the jungle. Our guide who had been brought up in the area said that not many people chose to do this trip, it was only the second time he had made such a long trek with foreigners and stayed with local people. People would usually book into hotels, and even our guide who did this to supplement his schoolteacher’s pay probably quite enjoyed the ensuite at the hotels, found this leisurely carefree pace quite refreshing. 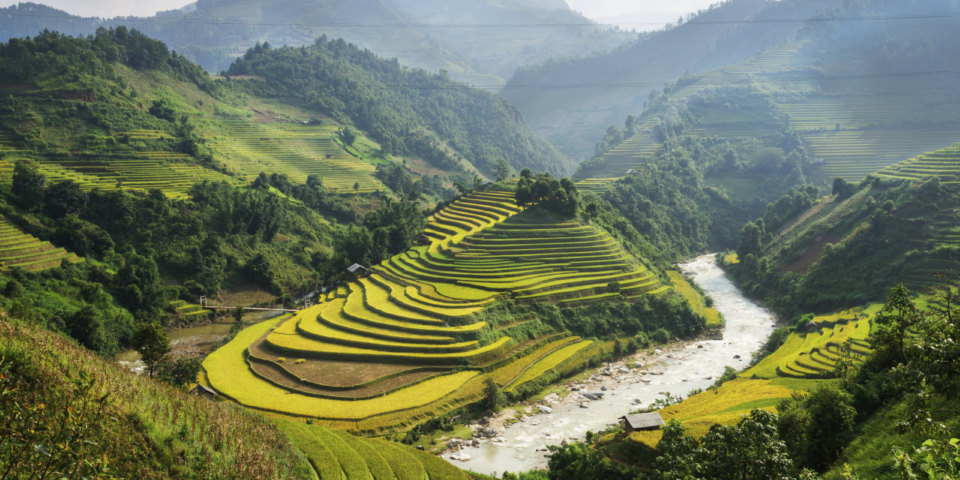 We strode through rice paddy fields, avoided the odd snake and when we spotted a river would jump in. Whilst I was relaxing on the rocks when my husband and the guide decided to go for a swim, a group of Red Hmong tribeswomen saw it as an opportunity to sell me the trinkets they were carrying. When I turned down every item in their bag, because then I would have to carry it, they decided that they would just sit down and chat to me.

They looked magnificent. Their starched red headpieces shone out against the blue sky and their gold jewellery glittered in the sun. They weren’t in a rush to go anywhere. They were amused by the foreigners who were taking a dip where they would probably wash their buffalo.

One said she had three buffalo and with a big toothy grin added that one buffalo was pregnant, so as it happened it looked as if I was rubbing shoulders with Sapa’s millionaires. 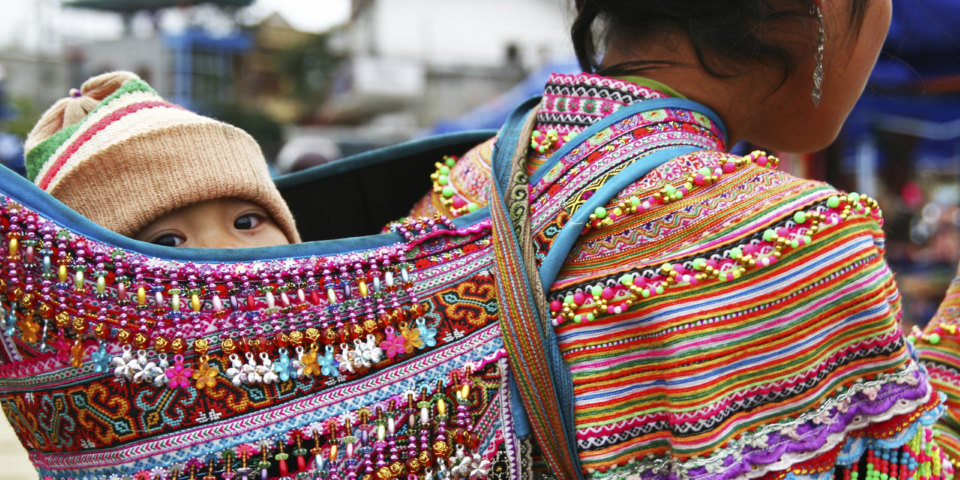 Buffaloes were one of Sapa’s treasures and with happy water we found another. As we walked from homestay to homestay we discovered that every farmer had their own recipe for rice wine, which they called ‘happy water’. Until now the porters decided to avoid the happy water, then on the last night of the walk they decided it was about time they joined the party. In fact, it looked as if the whole village had turned out to welcome the foreigners who had been walking through the rice paddy fields, over the mountains and sleeping wherever anyone had space for them. The farmer had cooked a pig and the happy water was flowing.

After toasting everyone in the room, and awash with happy water we then told that we needed to take it in turns to sing. The farmer started by singing the communist party anthem. It wasn’t exactly a karaoke track, but the powerful song seemed to break the ice and had everyone charging their glasses. Then it was over to the foreigners. We weren’t sure what to do so my husband picked “Swing Low Sweet Chariot”, which was often sung on the terraces during rugby matches at Twickenham.

They gave my husband polite applause and then the next few minutes were spent explaining what chariot we were swinging and why we felt the need to swing it. But they were happy with our contribution. 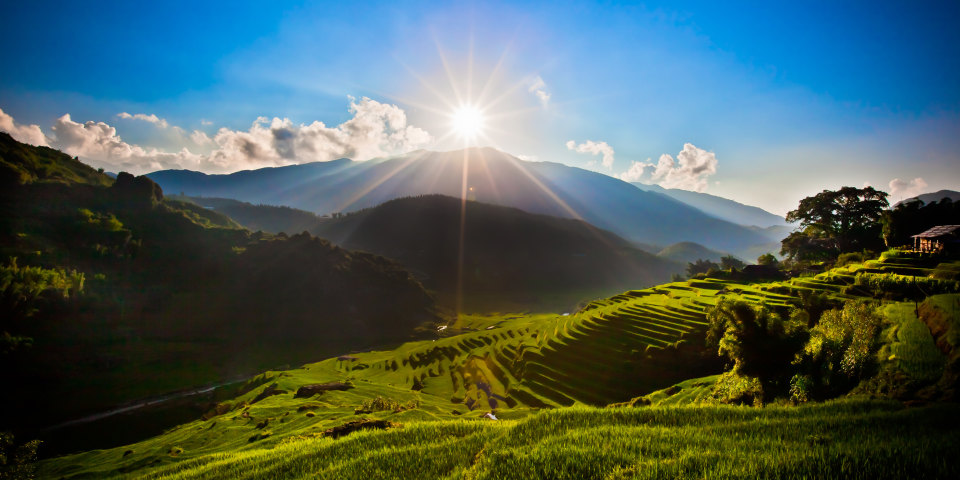 Then the porter who hadn’t said two words all the journey got to his feet. He started to sing a Hmong folk song and a hush fell around the table. His sweet and soulful voice rang out through the darkness and each person around the table seemed to gulp after he finished.

Our guide explained it’s how a Hmong man would woo his future wife. They would sing songs to each other across the river. He also explained later that it said “I’m poor, you’re poor, we’re not going to do any better than each other so we might as well get married.” Not so romantic. But neither the lyrics, not the fact that the porter fell into the bushes moments later while relieving himself of happy water, could destroy the moment.

Sapa had been full of special moments. From the Red Hmong ladies who giggled with glee at the hopeless white woman who couldn’t sew and didn’t have any buffalo to the Black Hmong porter who could have won Asia’s Got Talent and the scenery… yes, the scenery… Every time I turned a corner I was faced with another landscape worthy of a Hollywood movie. The rice paddy fields that decorated the hillside like a quilt. Free from skyscrapers, pollution and traffic, it was the epitome of the slow life – and the perfect reason to go back.