TREKKING ACROSS AN ICE AGE LANDSCAPE IN CANADA

by Lightfoot
Stuart Foster takes a trek through the Manitoba wilderness
Pale green lichen crackles and crunches beneath the soles of my boots as I stride uphill. The ridge we’re walking on is more than 375 kilometres north of Thompson, where the highway ends, and roughly the same distance west of Churchill - ‘the polar bear capital of the world’. Polar bears don’t venture this far inland, so it’s a black bear that I’m hopeful of spotting — from a suitable distance, of course — while walking in the wilderness of northern Manitoba.
We’re out on the Robertson Esker, a ridge that streaks across the lake-pocked Canadian landscape for 290 kilometres. The ridge twists through dense woodland for as far as I can see. Dr Brian Kotak, the biologist who is my guide today, has already explained that the esker straddles the Manitoba-Nunavut border and continues into the tundra of the subarctic north.
Like similar ridges in this part of Canada, the Robertson Esker was formed during the last Ice Age. As glaciers retreated, meltwater flowed below the frozen surface of the landscape.
Gushing along in tunnel-like cavities, the water deposited immense quantities of sand and grit. So much, in fact, that today I’ll be able to look down over the lakes and forestation of the surrounding countryside from an altitude of 70 metres. 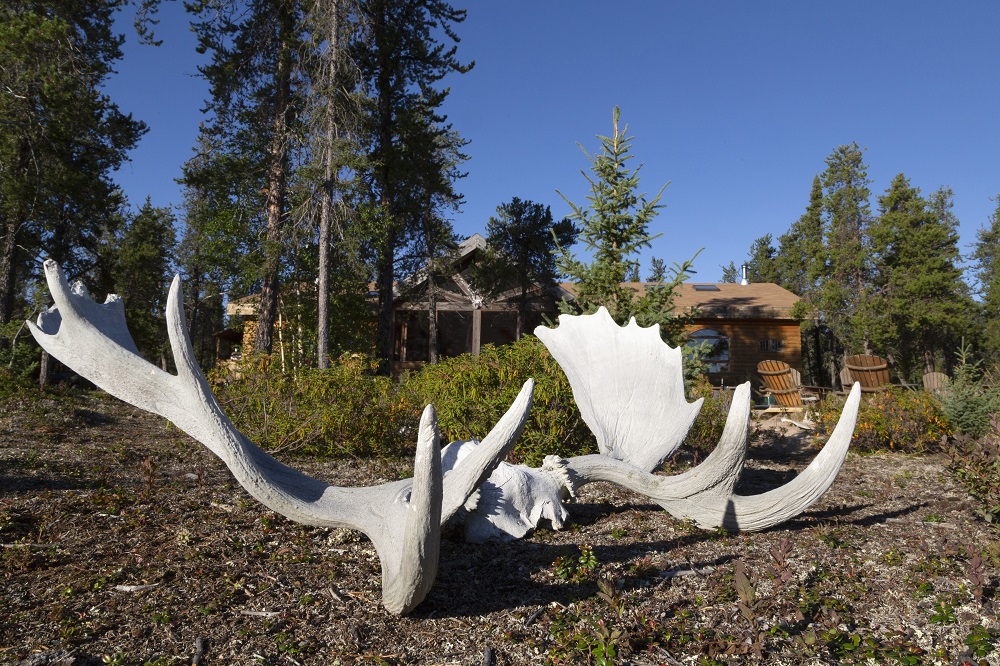 Kotak explains that the land we’re walking on was, until approximately 8,000 years ago, flooded by Lake Agassiz, a glacial body of water that once spanned much of North America. As the water gradually drained, the highest points of the eskers jutted from the surface of the lake. Hunter-gatherers overnighted on those islands, paddling between them in canoes.

These days the esker is on the migration route of the enormous Qamanirjuaq caribou herd, which is estimated to be around 300,000 strong. As we walk, Kotak explains that caribou are the only creatures in the world able to digest the lichen that we’re walking across; they have enzymes making it possible. I find it hard to imagine that the seemingly dry vegetation is rich source of nutrition, yet it provides sustenance during the extreme cold of the snowy Canadian winter. The caribou, which are known as reindeer elsewhere in the world, sink onto their forelegs while seeking lichen beneath snow — an act known as cratering. A scattering of dry, egg-shaped droppings is evidence of their presence long before we arrived here.

Though the steep sides of the esker are clad with spruce and pine trees, a strip along its top is devoid of vegetation. Our feet sink into the soft sandy ground, which also bears evidence of fresh moose tracks. A line of heart-shaped hoof marks crosses the ridge. Kotak explains that the narrow part of the imprint indicates the direction the animal was travelling in. The calves, I learn, step within the footprints left by their mothers. A few metres away lies a single sun-bleached antler, roughly the length of my arm; bulls shed them each January. 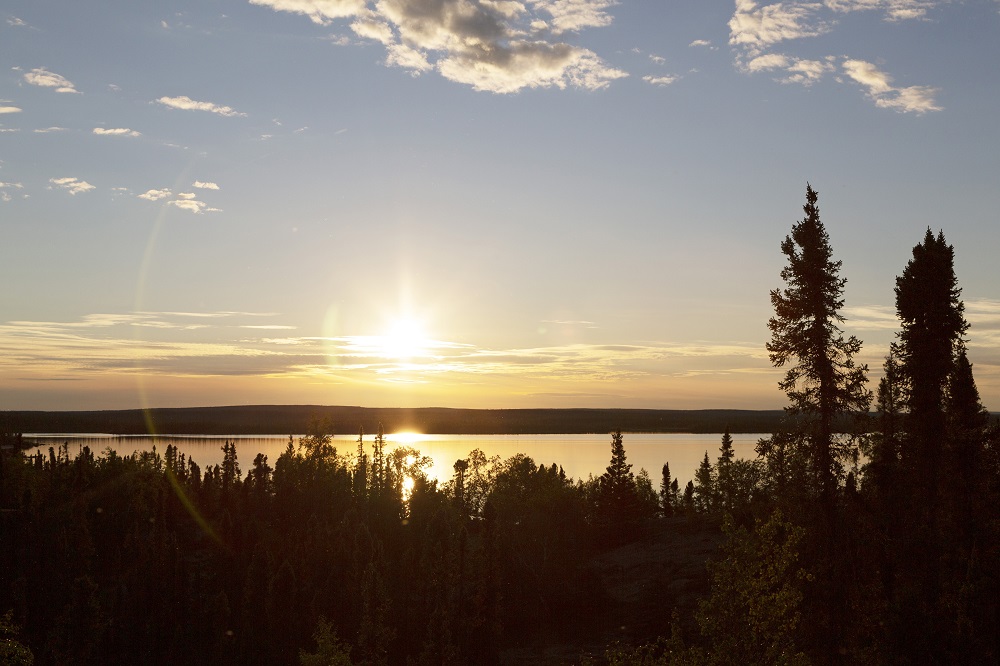 In the far distance a bald eagle wheels, seemingly effortlessly, through the sky — presumably on the lookout for fish. Lakes in this part of Canada is renowned among anglers for the prodigious size and healthy stock of northern pike, walleye and lake trout. Glancing around I spot grey jay, a bird that many Canadians refer to as the whisky jack, flitting between the branches of a nearby spruce. Having noted my interest in birdlife Brian points out a three-toed woodpecker, hidden in plain sight on a gnarled, shadow-dappled tree trunk. Maybe he’s responsible for the distant hammering we’ve been hearing? “Once insects get under the bark it’s like going to the buffet table for a woodpecker,” jokes Kotak.

A rock catches his eye. It looks like any other stone to me. Then Kotak points out the flaked quartz surrounding it. He explains the rock was probably used as a chipping station, around 1,500 years ago, by the Taltheilei people. Remarkably, stones that have been fashioned into imperfectly finished arrowheads and spearheads lie abandoned. I’ve previously only ever seen artefacts such as these in museums. The remoteness of this region and short summer season means such items can still be found with ease. Archaeological research is still ongoing. It’s clear that Brian has become a knowledgeable enthusiast.

Near the highest point in the area we stand by a circle of stones that once surrounded a campfire. With a little imagination, the ring of rocks just a few metres away may well have held down the hides of a tent. I listen as Kotak explains how lined-up rocks, whose significance I would easily have missed, are markers along long-established portage routes used by First Nations peoples. 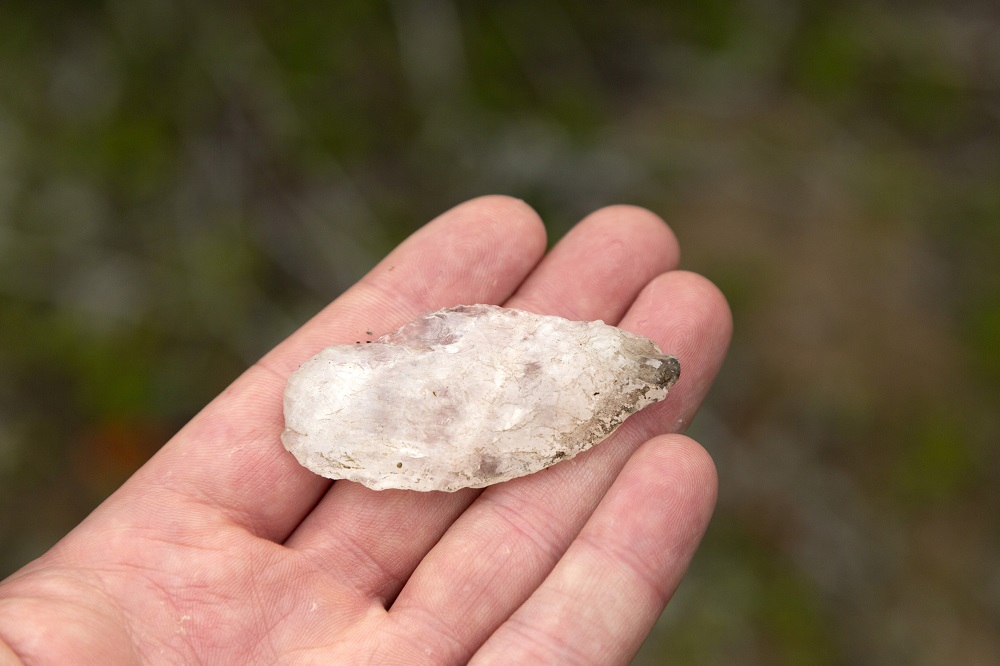 Until recently, canoes remained the principal means of transport in and out of this region, whose remoteness means it’s necessary to fly in and fly out. During wintertime, snowmobiles are used by trappers to get about. In summer, float planes are the quickest means of getting about this part of the province.

Dropping towards lower ground we stumble across paw prints left by a wolf. Still clearly defined, they are probably from last night, when we heard distant howling while chatting around the campfire. Despite being tried after a day of outdoor activities I forced myself to stay away past midnight. The reason? Determination to see the Northern Lights, which frequently dance in the night sky above northern Manitoba. So long as the sky is clear there’s a good chance of seeing them, I was told. What seemed to be a hazy white cloud drifted across the sky, prompting a voice in the semi-darkness around the fire to utter “they’re here.” The white deepened to a green that swayed and jigged above us for 45 engrossing minutes, eliciting wows of appreciation.

I haven’t yet seen the black bear that I’d love to see but I’m still hopeful. Anyway, with the sky above us clearing, the great bear and little bear constellations will be waiting for me tonight, when hopefully I’ll have another opportunity to view the Northern Lights.

A haven for outdoor enthusiasts with glacier-covered mountains, pristine lakes, rolling prairies and some of the best skiing in the world. However, it also has its share of vibrant cities. 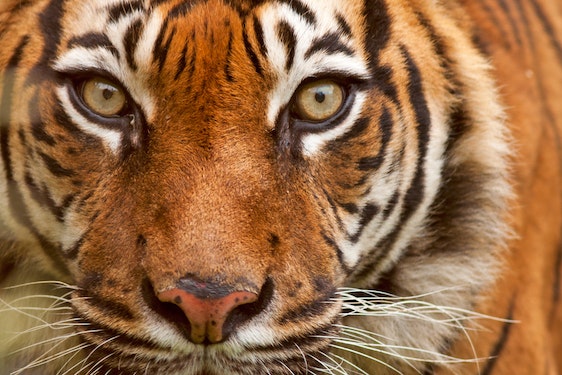