by Lightfoot
Photographer Richard Friend discovered an innovative scheme in Bangkok that is helping children fight for a better future
Khru Khae was waiting for me and he couldn’t wait to show me around. The elderly Muay Thai instructor was proud of his one-ring gym that was tucked away underneath one of the city’s flyovers. And there’s no reason why he shouldn’t be. For within this outdoor workout space, the gentlemanly Muay Thai instructor was helping to change lives.
It’s clear that it’s more than just a boxing camp.

I came across this small gym the day before and it immediately caught my attention. Living in the fast-paced, cramped city of Bangkok I’m always intrigued by how people turn the smallest of spaces into somewhere to socialize or play sport. This small boxing gym set under an expressway near the rundown Khlong Toey district seemed to shine out.

When I had stepped up to the gym to take a close look, an elderly lady explained to me that it was used as a training camp for a foundation and it was only open in the evening after school and on Saturday afternoons. I had told her that I thought it would be an interesting story to photograph and she suggested I come back the next day. 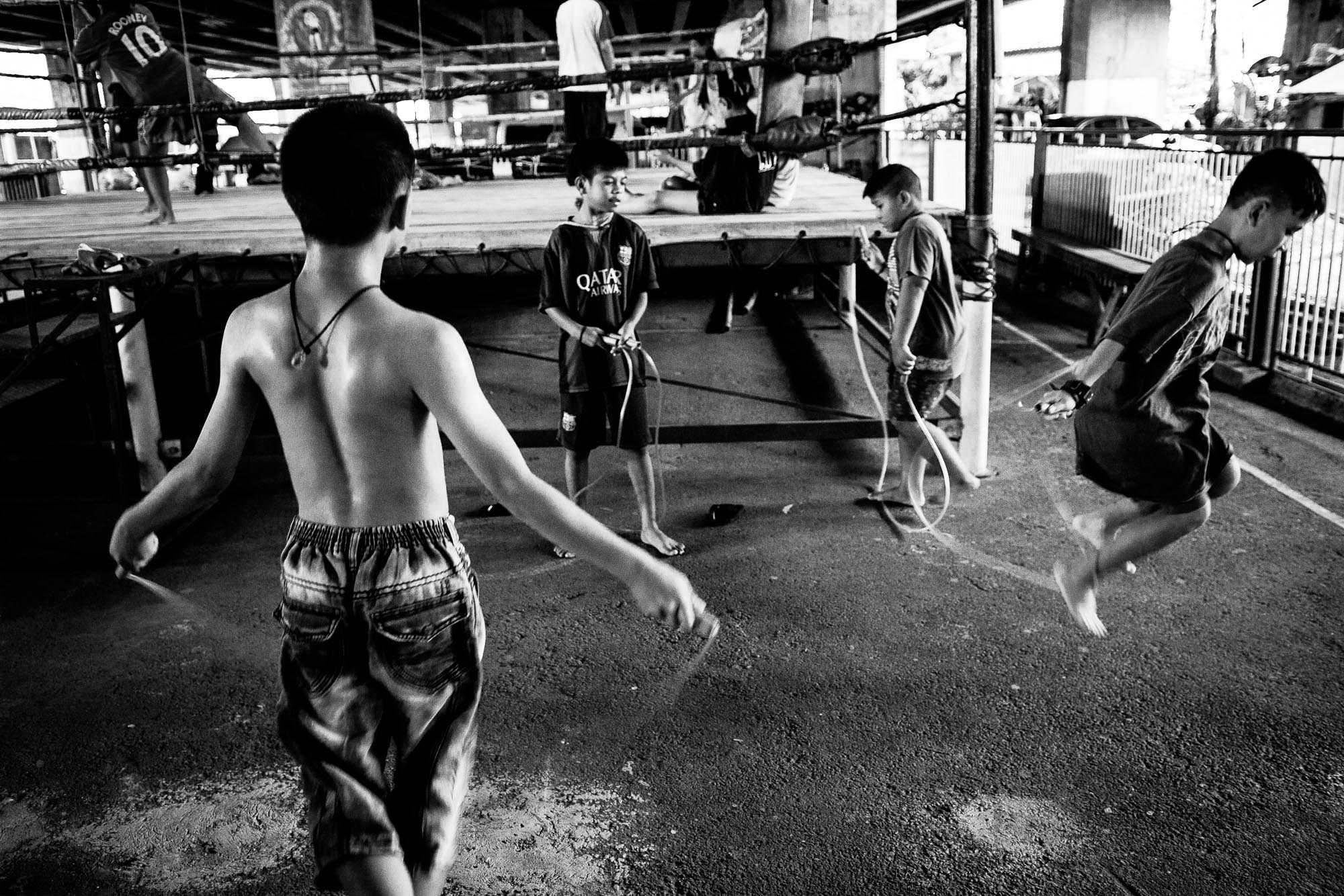 And that’s why Khru Khae was waiting for me. The elderly woman had told him that I might return, and he was looking forward to telling me more about all their hard work. As he walked me around the workout space he explained that the gym was part of the Thai Boxing Project to Prevent Drug Abuse and it is one of a wider network.

Khru Khae explained that the kids who participate in this project tend to come from very difficult backgrounds. Many of the kids who visited the gym came from homes where the parents and older siblings are involved in drug abuse. Some of the children had family members in prison, while others were living in an area that suffers from crime and gang related violence. The result of this explained Khru Khae is that the mortality rate among these families is staggeringly high.

As I talked to Khru Khae the children started to turn up for their training session. Some turned up barefoot and wearing tatty clothes, while others were boisterous and overexcited. It led one of the volunteer instructors to joke that trying to teach them is like ‘catching monkeys’. But as the instructors coaxed their young students to start their warm-up exercises and practice skipping, it’s obvious that there’s warmth on both sides.

While the boxing ring takes centre stage in the gym, it’s clear that the focus isn’t so much about fighting, but more about training. The children – both boys and girls – learn the boxing moves, but they also learn about the traditions that come with the sport. They are taught the Wai Kru, a dance performed to traditional Thai music that shows respect to their trainers, elders and ancestors. And the older children are encouraged to play a mentoring and coaching role to the younger ones, which teaches them about leadership and responsibility.

It’s also clear that it’s more than just a boxing camp. Just before the start of the new school term, the boxing school with the help of local businesses, handed out lunch boxes and uniforms to the children. As generous as the local companies are it still looks as if they are short of funds, and the instructors will often pay out of their own pockets to buy treats for the children at the end of training sessions. 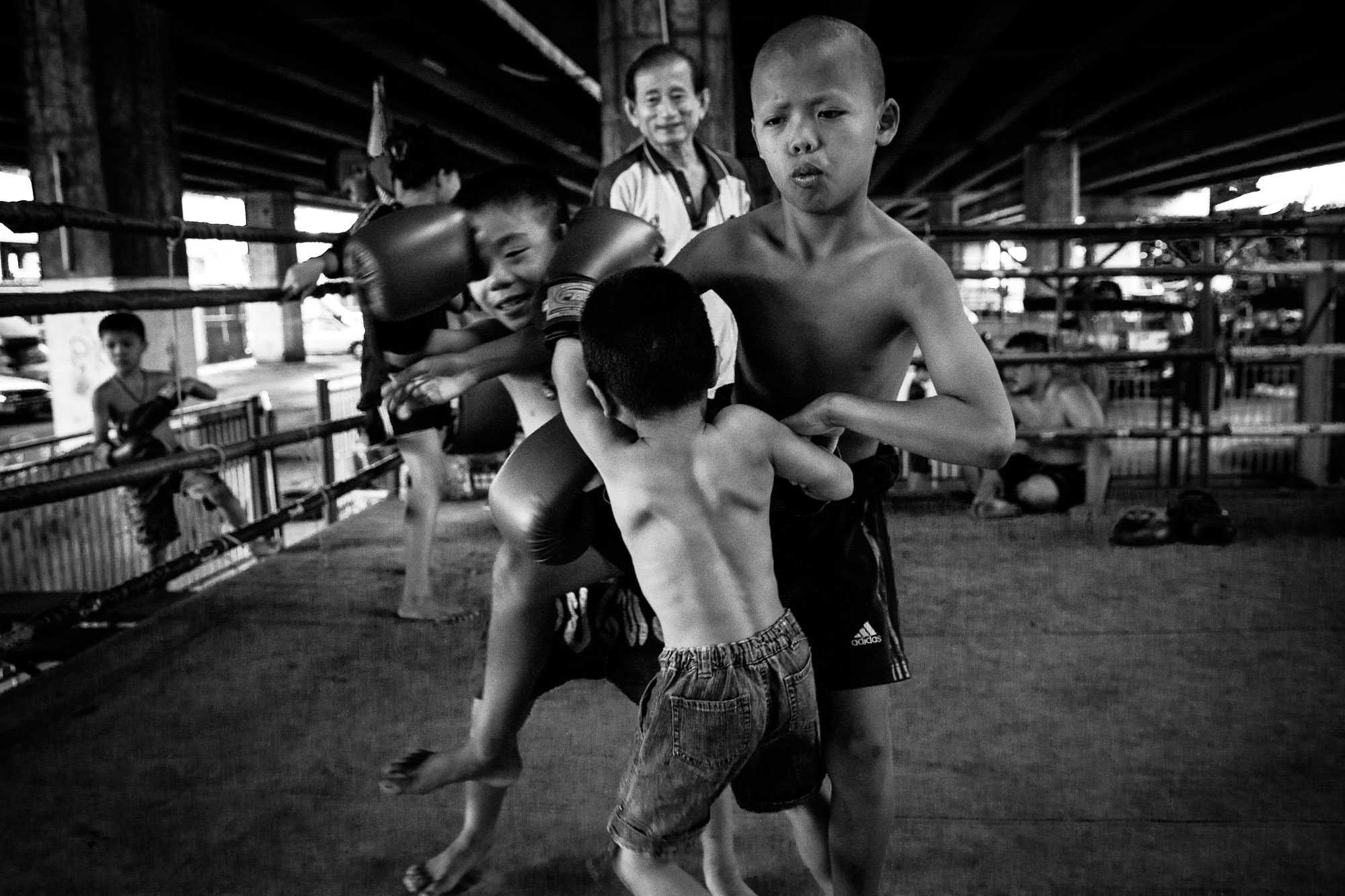 The pride that I saw in the students and teachers on my first trip, I wanted to capture on film. So over the next year I returned several times to interview the students and their teachers and take more shots. They then invited me to an exhibition match at a local temple where the older children would practice what they had been taught.

It looked as if the whole community – family, friends, teachers – had turned out to support them. These young fighters had clearly paid close attention to what they teachers had been telling them. As their instructors massaged their limbs, and wrapped their hands, the children seemed to know that what they were doing was part of their heritage – they had respect for the ritual and they had respect for their teachers. As they stepped into the ring, performed their Wai Kru and paid homage to their ancestors, they gave it their all. I was struck by their incredible courage.

What I was seeing was the result of the teachers and kids’ incredible dedication and perseverance. Boxing as a way out of hardship is perhaps a bit clichéd, but it still holds powerful resonance, as a metaphor for the struggle that these kids face.

I hope that when people see this series it gives some insight into what life as a child in Bangkok can be like – and that they can convey the sense of dignity, camaraderie and courage. I hope that the children see themselves in a similar way, and that they will be proud of these images.

The Best of Both in South Africa: Safari and City