by Lightfoot
Guinness World Record holder Arnie Wilson spent 365 days skiing around the world. He skied in America, Canada, South America and Europe. But the record-breaking skier admits that it was a tiny resort in New Zealand that gave him one of the best days on the snow

It’s sometimes claimed that New Zealand’s Southern Alps are as big, or even bigger, than those in Europe. Whatever the truth, the South Island version, stretching for 500 kilometres are truly spectacular. Its highest peak is Mount Cook (or Aoraki to give it its Maori name – which means “cloud piercer”). Discovered by Captain Cook in March 1770, at 3,724 metres it’s still the highest mountain in the whole country in spite of losing 40 metres of altitude in 1991 after a rock slide.

When I first visited New Zealand I was pretty unprepared for the vast scale of the Southern Alps. I found superb powder opportunities; 10 huge, slick ski resorts, as well as half a dozen wonderful heli-skiing locations and numerous “club fields” – about which more later.

But a ski resort is nothing without snow and lucky for the Southern Alps it receives it in bucket loads. Hence, New Zealand is a huge attraction for powder lovers from all over the world – particularly when it is combined with heli-skiing. 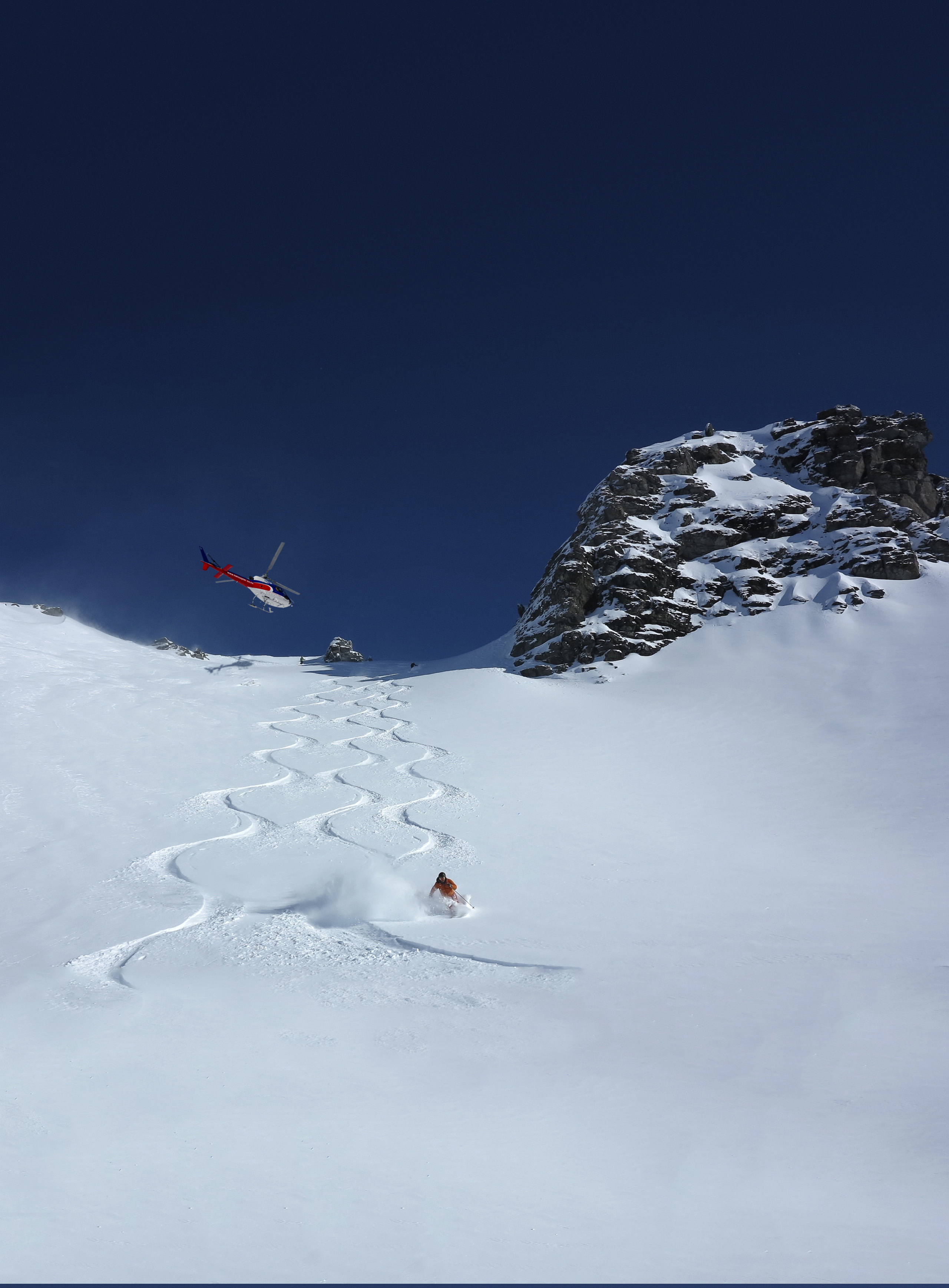 It’s said that there are more helicopters per capita than anywhere else in the world. Whether this is true or not, New Zealanders will find any excuse to take a heli up the mountain – whether it’s to go skiing, heli-biking or even for a picnic.

You’ll find that most heli-skiing companies operate out of two resorts in the South Island: the Wakatipu lakeside resort town of Queenstown and the even more picturesque (also lakeside) town of Wanaka.

I was used to heli-skiing in Canada, where the norm is to spend a week in a remote heli-ski lodge, skiing every day, and not returning to “civilisation” till the end of the week. While in the Southern Alps you normally heli-ski one day at a time, returning to lakeside resorts each evening for a more bucolic après ski experience. I found the heli-skiing just as good as Canada (perhaps a little warmer!), with some nice long runs, good powder and a very friendly guide!

On the day we went heli-sking we were taxied up into the mountains far away from the restaurants and lifts. We were all wearing avalanche receivers, which would transmit a signal in the unlikely event we were buried under deep snow. There were no pistes where the pilot took us, but there dozens of named runs and well mapped landing areas, which were usually marked with a flag so that the pilot can see where to land. During our day on the snow we were treated to acres of powder that was wonderful to turn in. There were just four of us in our group so the helicopter spent the day ferrying us and other groups around the mountains. 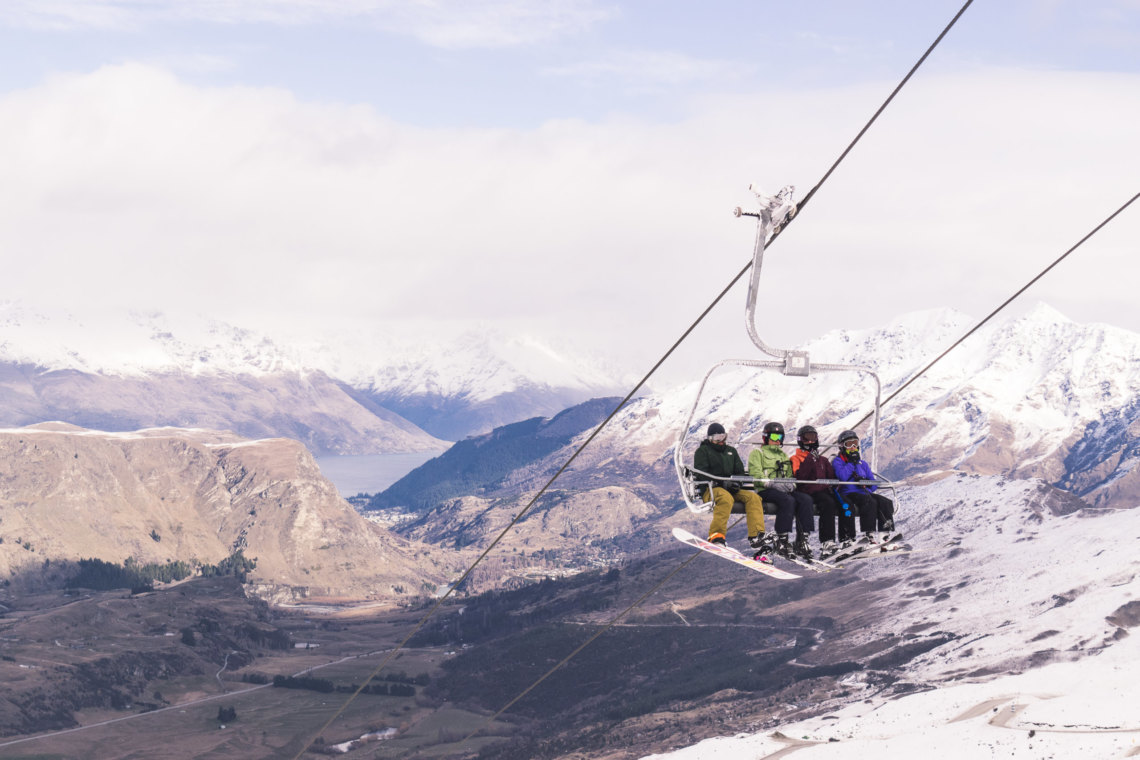 If you’ve not tried it, you’ll need do it at least once. Take wide (“fat”) skis to help you cut through the powder. If you could conventional skis you’ll find it really hard work and exhausting, and it will take all the fun out of what you’re trying to achieve. It’s not for beginners. You should be a strong intermediate or better, with a penchant for powder, to get the most out of heli-skiing.

Your guide and the pilot will agree which runs to visit, and in which order. If visibility is not too good, for example, they might take you into the trees to ski where visibility is always better if it’s snowing – although tree skiing is much rarer in New Zealand than in Canada or the European Alps. But either way, you’ll just have the chance to create those powder eights, where you bounce gently down the mountain after another skier turning his or her “s” into figures of eight, or “eights”.

There are some golden rules when you’re heli-skiing. Never ski past the guide – he or she will be constantly checking the “road” ahead for any difficulties or potential dangers, such as the occasional crevasse or unstable snow. And when the helicopter comes in to land on the snow to collect you after each of your descents never instinctively chase your hat or gloves unless you want a free haircut.

However, as much fun as heli-sking is, you don’t have to leave the ground in New Zealand to experience powder – just head to a club field. New Zealand has about a dozen club fields – embryonic ski resorts that have never been fully or even partly developed. They remain pretty much as they were when they were first built, with mainly primitive rope tow lifts and as often as not, no groomed runs, so there are no real pistes in the normal sense of the word – just off-piste. 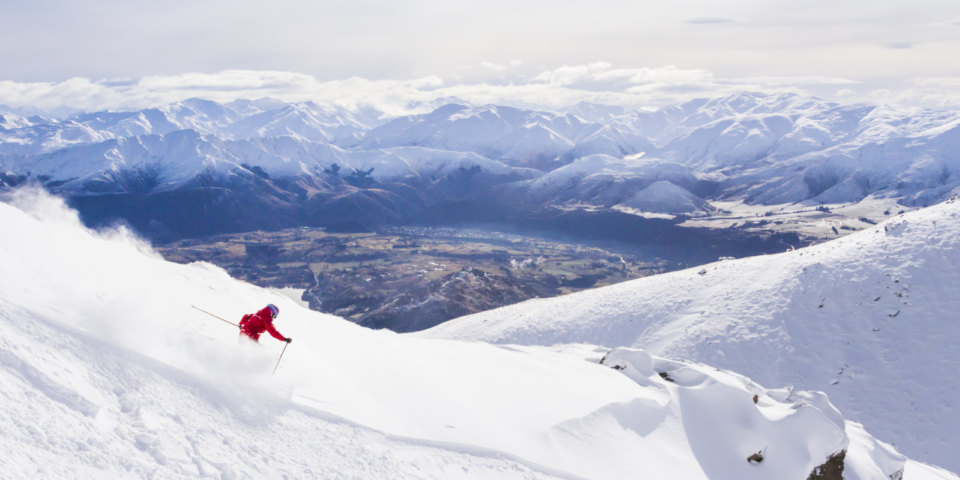 Of course, you can’t go wrong with a day on the slopes at Treble Cone, Mount Hutt, Coronet Peak or the Remarkables, but if you want to find some powder at your ski tips take a trip to the club fields at Craigieburn, Porters, Broken River or Temple Basin.

Strangely enough, in spite of perhaps a dozen visits to New Zealand over the years, and skiing two or three Everests’-worth of vertical feet at seven different heliski locations, the run I will always remember was at a small ski area called Mount Dobson. When my companion Lucy Dicker and I were in the middle of a record breaking attempt in 1994 to ski 365 consecutive days around the globe, we came across Mount Dobson. While its runs are fairly unremarkable, the scenery is dramatic. And we found that if you hike a little way into the wilderness, you can ski 3,000 vertical feet down to the approach road. When we skied this run on a spring day in October, the powder was so good and the scenery so inspirational that we both felt: “Who needs a helicopter?”

New Zealand is truly a gift that keeps on giving. Pretty much anywhere in the Alps, you are going to have fun and be able to create a powder eight or two!

It is weathered and wild land, home to the near-miraculous natural wonder of Milford Sound, as well as Queenstown, the Kiwi adventure capital.

SKIING IN THE HIMALAYAS

﻿Ninety years in the making, the hill station of Gulmarg...

SKIING WITH KIDS IN JAPAN

﻿If you want to hit the slopes this winter and looking f...

SNOWBOARDING AND SURFING JAPAN IN ONE DAY

Adrenalin addict Aaron Jamieson has spent 10 years trying to find the location where he can ski and surf Japan in one...