It’s a familiar voice that captures my attention. It rises by megaphone above the screaming lungs, drums and dancing bodies that engulf every paved surface, every balcony in Victoria, the steaming capital of the Seychelles archipelago.

“I have dedicated my life to the struggle of the African people.” The voice declares with a familiar cadence, but I can’t quite put my finger on who it is. Between crowds of gleaming brows and beaming white smiles, the rapturous spectacle of the fourth annual Carnaval International de Victoria is rolling into action.

“I have cherished the ideal of a democratic and free society in which all persons will live together in harmony.” The voice rises again from somewhere behind an approaching float draped in the South African flag. They’re one of 26 nations representing at what has grown into an unprecedented ‘Carnaval des Carnavals,’ a showcase of the best performing acts from carnival heavies across each shimmering, shimmying sea. 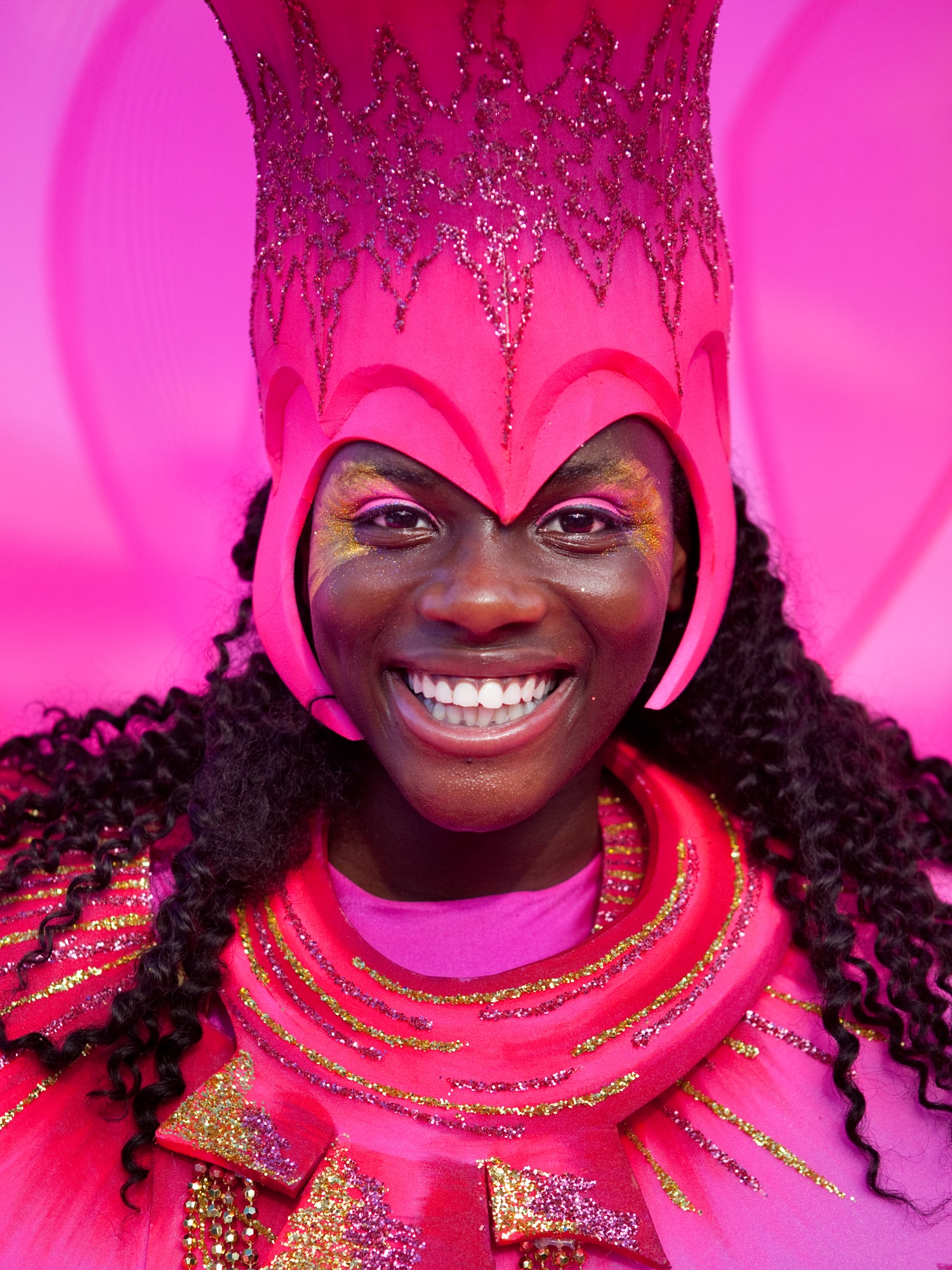 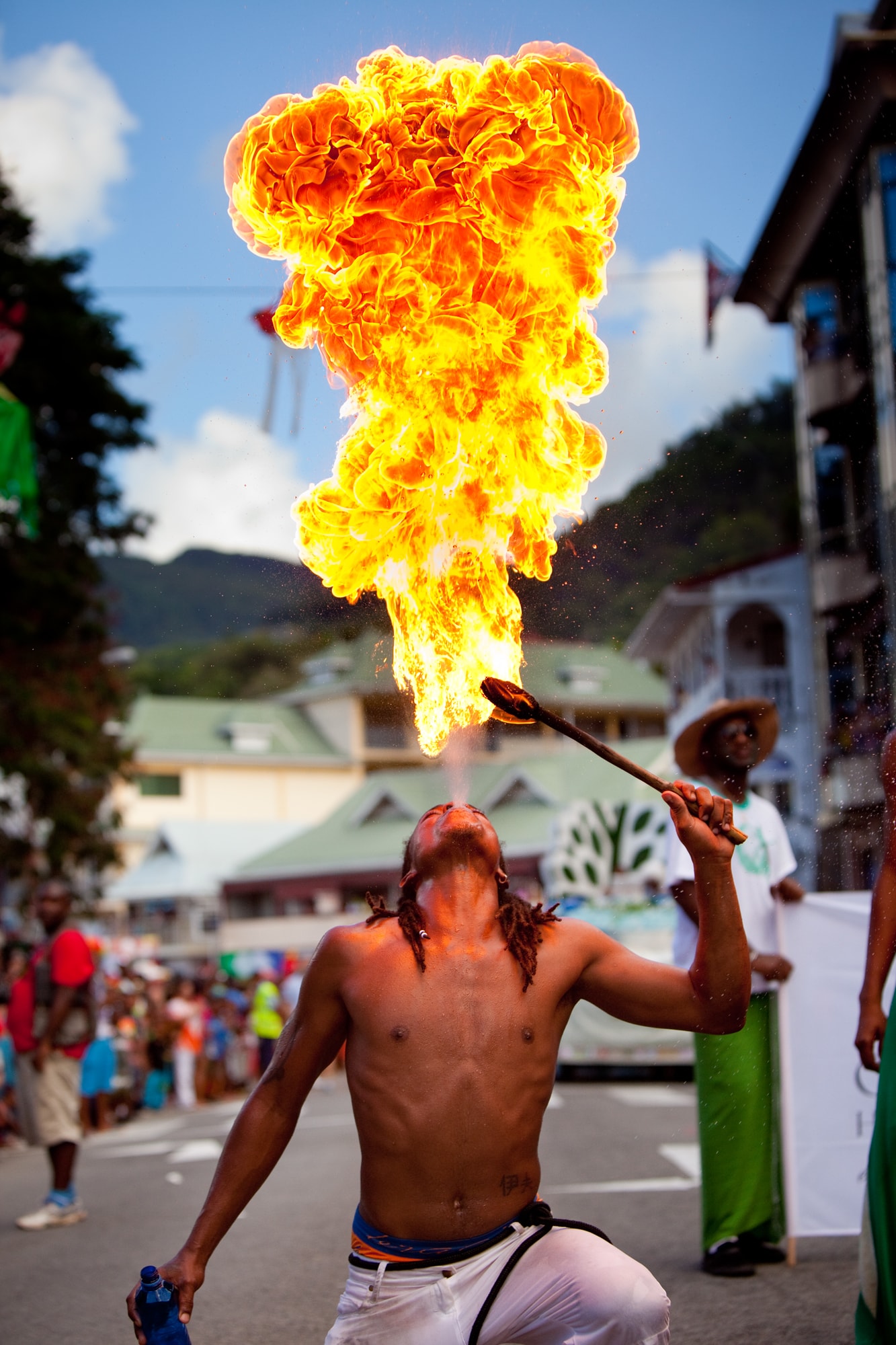 Amidst the crowded procession a clown in a purple emblazoned suit appears with a conjured, jolty swagger. He pauses with an upward gaze (think Obama doing ‘hope’) towards a crammed balcony.

“It is an ideal for which I hope to live for and to see realised.”

Finally it clicks. The speech is one of the greatest of the 20th century, ‘I Am Prepared to Die’ from the Rivonia Trial of 1964. The clown’s voice is pitch perfect Nelson Mandela, and each resounding cheer from the balconies gives Madiba’s vision the celebration it always deserved. 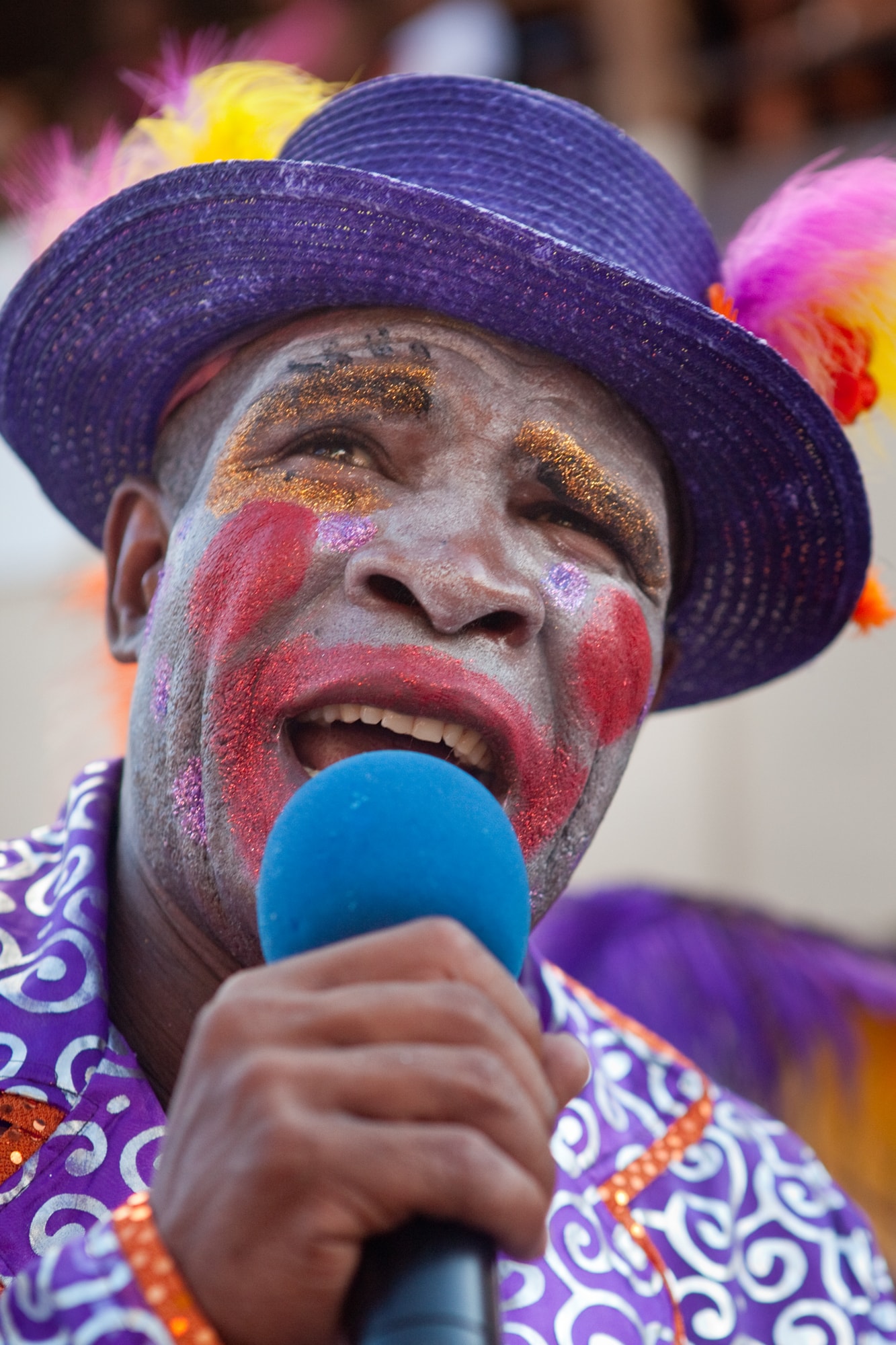 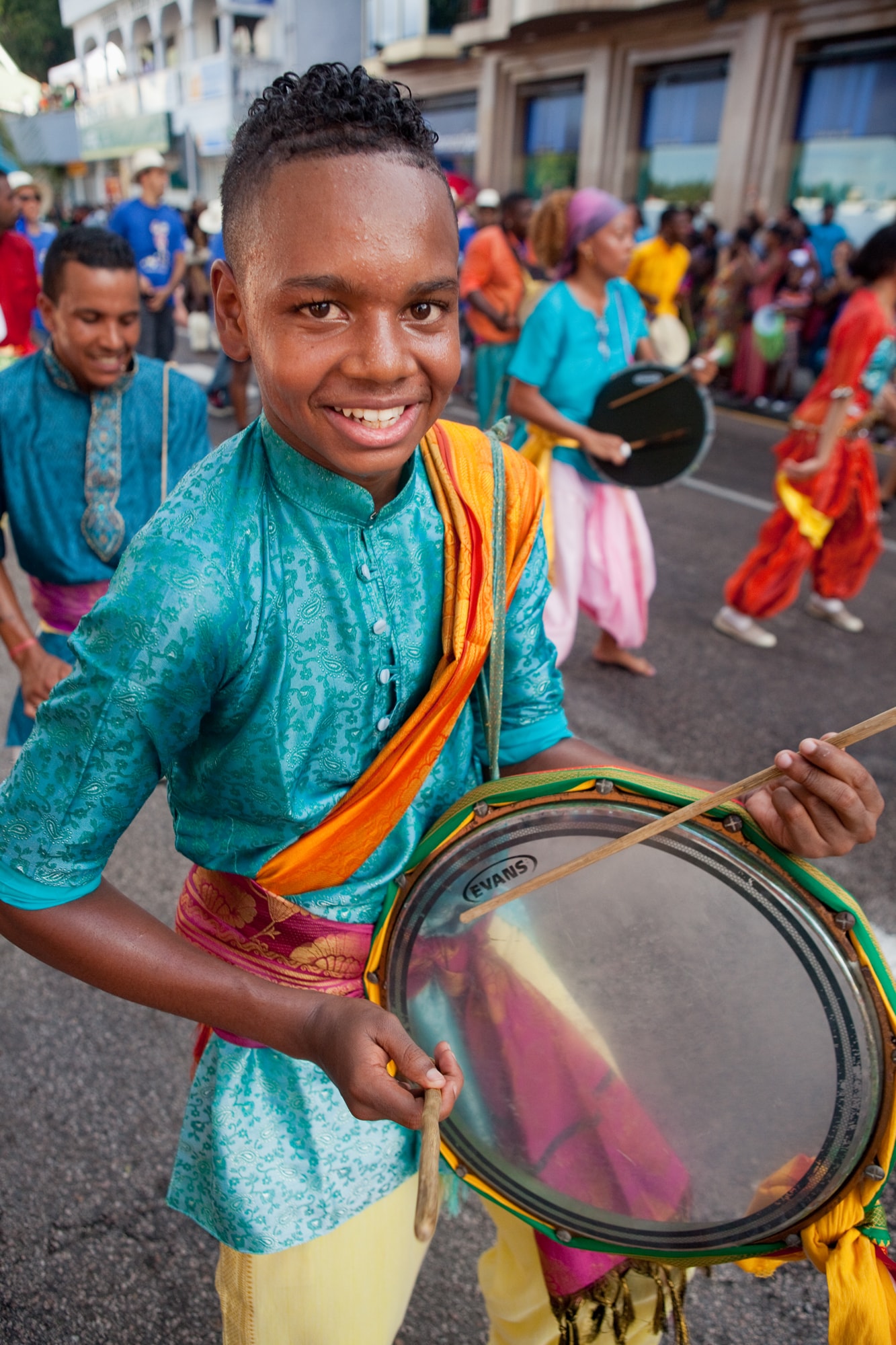 Though South Africa isn’t the headline performing delegation. Those honours are hotly contested between international frontrunners Brazil, Trinidad and Tobago and the UK (via Notting Hill). On opening night of the three-day carnival they take turns lighting up Linité Stadium, the national soccer pitch set against a backdrop of yacht masts in the marina.

Amid a stage show overflowing with samba, sequins, Soca queens and Bourbon Kings, the Minister for Tourism and Culture, Alain St. Ange, interjects with an speech laden with John Lennon quotes and declarations that “the world needs to live in harmony and unite through culture.” While I might usually be more of a cynical type, tonight the heady mardi gras mood has rubbed off on me and I find myself pulling on a mask, sipping on rum and bungling a few new dance moves.

Spread over 1.4 million square-kilometres of ocean north-east of Madagascar, the 115 granite and coral islands of the Seychelles are home to just 93,000 people. It is the smallest population of all independent African nations, but also the highest earning by GDP per capita. 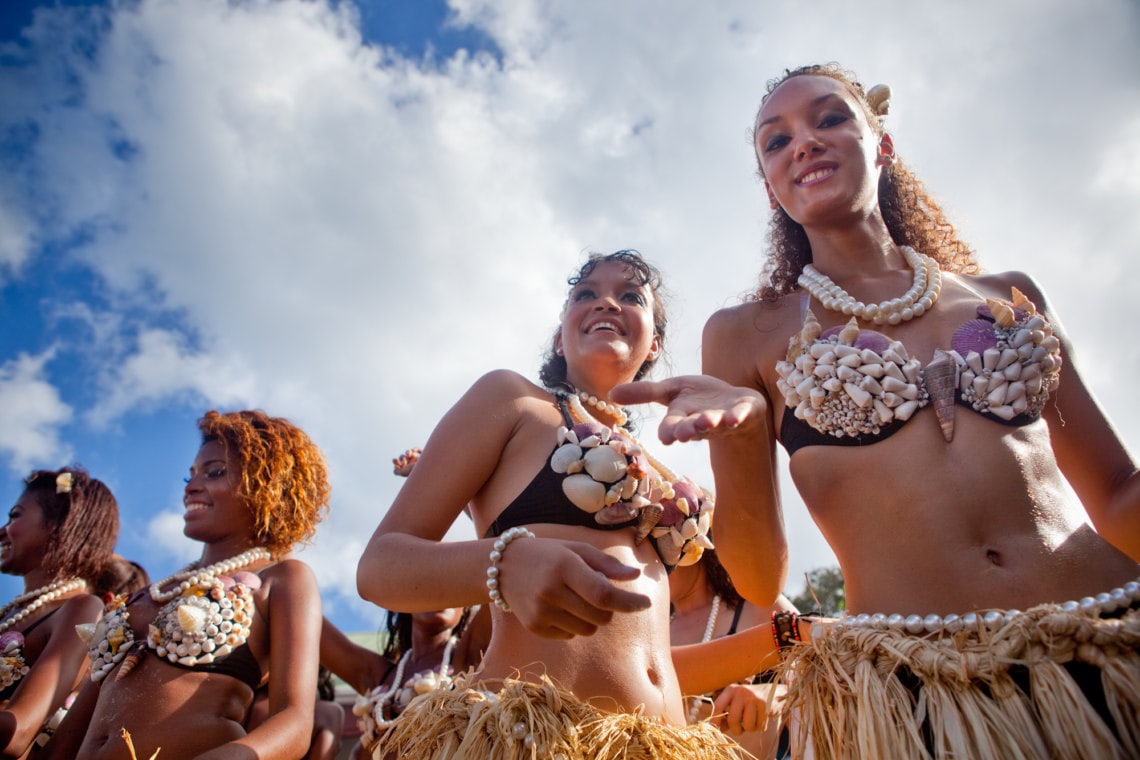 Arriving from the air, the main island, Mahé, reveals itself a jumble of steep mountain saddles, clad in rainforest and fringed with turquoise reefs. The pictorial arrangement of sails in its protected waters represent a history going as far back as Arab, Maldivian and possibly Austronesian seafarers. But the islands were uninhabited when the first Europeans laid eyes on them in the 16th century. From then they were a base for pirates and a waypoint for traders until the French formally took control in 1756.

Before joining the main parade on day two of the festival I sneak away to Takamaka Bay rum distillery and restaurant. It’s set out of town in a plantation homestead first built over 200 years ago. It still has an original bell used for calling in East African and Madagascan slaves who were exploited for the production of sugar cane, copra, cinnamon, tobacco and cotton. It’s a history preserved for contemplation as 93 per cent of Seychellois identify as Creole and are largely descended from those who suffered the injustices of the era.

Before lunch I tour the distillery and an intriguing medicinal garden featuring noni fruit, bat fruit, four-spices leaf, bilimbi and the aptly named ‘Mother in Law’s Tongue,’ an aloe-like plant with very sharp leaves. On the homestead veranda I take in the breeze and order the most delicious red snapper fillet of my life, poached with Hollandaise sauce and sautéed garlic potatoes. The visit is a strategic move, a refuelling, a calm before the tumult. 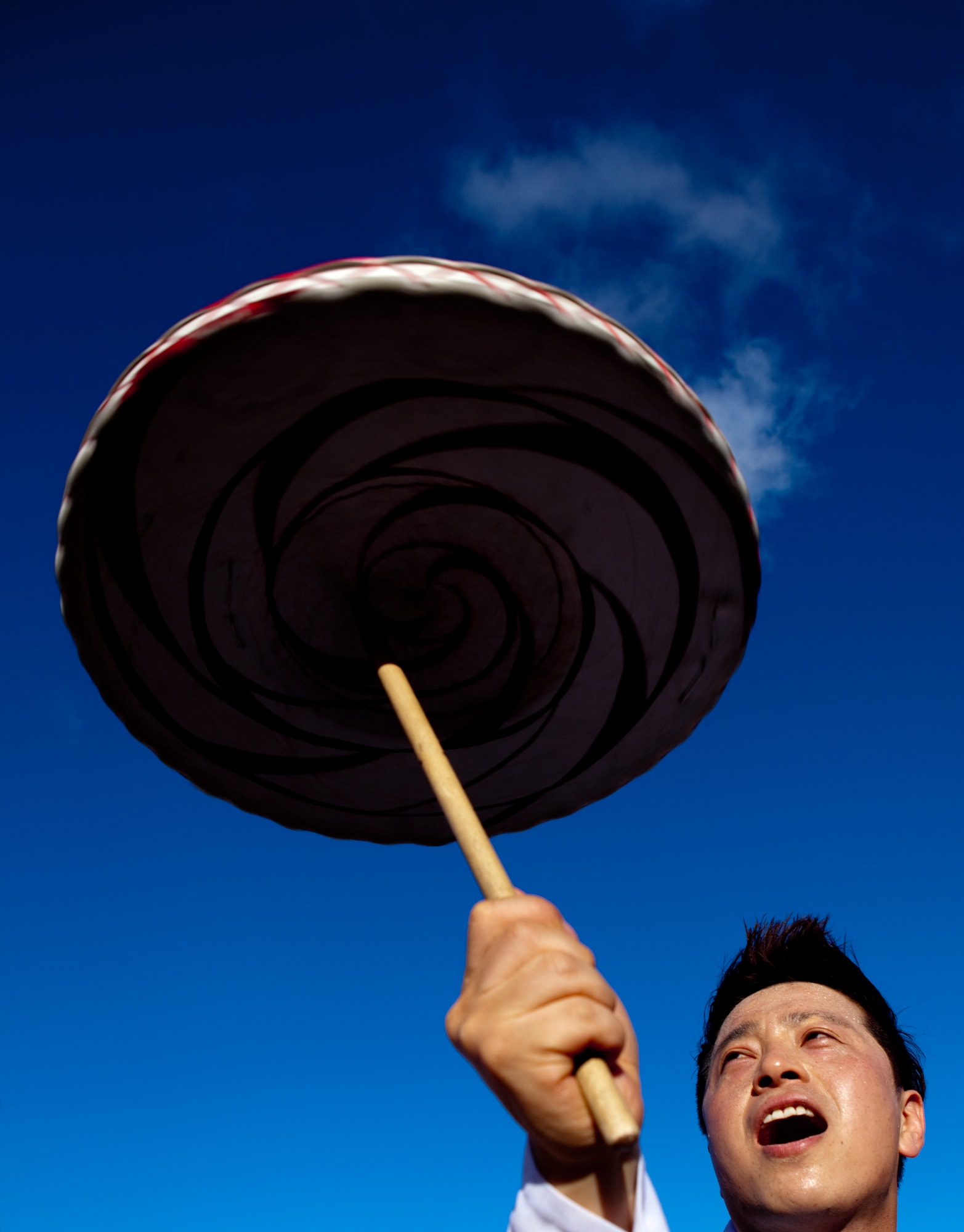 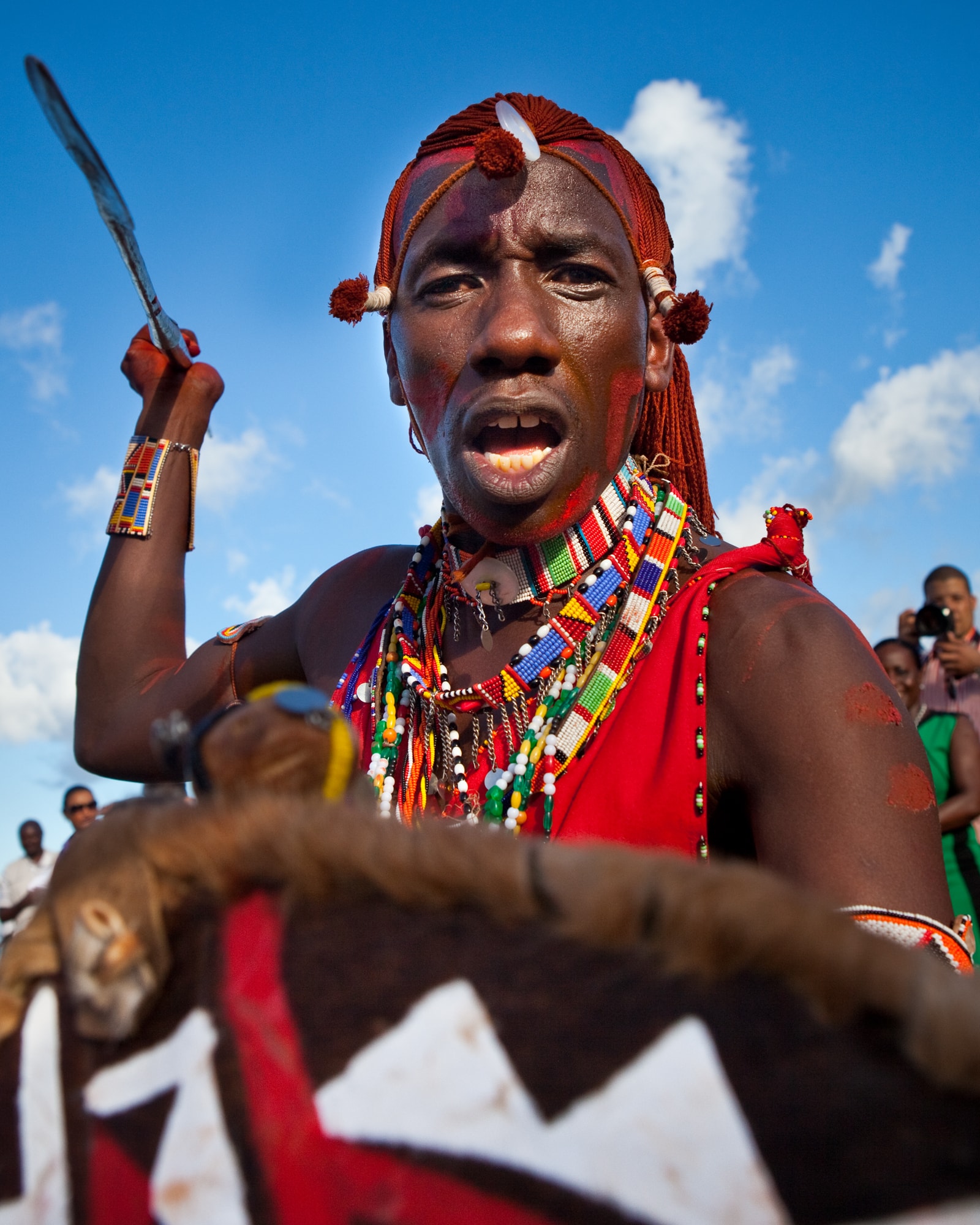 Then it’s back to the main event… And what an event. At the parade BMX tricksters in body paint compete for pavement with fire-breathers and Seychellois greasers popping motorcycle monos in fishnet stockings. They’re followed by a Louisiana Cajun band representing the USA, a South Korean ‘Samulmori’ percussion group and a troupe of masked, dancing ‘Amochilay’ nomads from Eastern Bhutan.

Visitors and local families mix in the side-streets, and children run underfoot in masks from the Kiddies Carnival at Freedom Square. The scale of events is just the right balance, packed where the action is happening, but notably island-low key elsewhere.

A crowd favourite is Trinidad and Tobago’s Soca singing queen, Lima Calbio, and her hundreds strong procession of ‘wave’ and ‘jumpin’ dancers in Baywatch inspired, turquoise and red bathing suits. It’s an unexpected contrast to Sweden’s contingent of Sami throat singers in arctic reindeer herding costumes. But it all makes for an authentic ‘community of nations’ atmosphere and celebrations are fuelled by street food and mobile bars until the early morning. 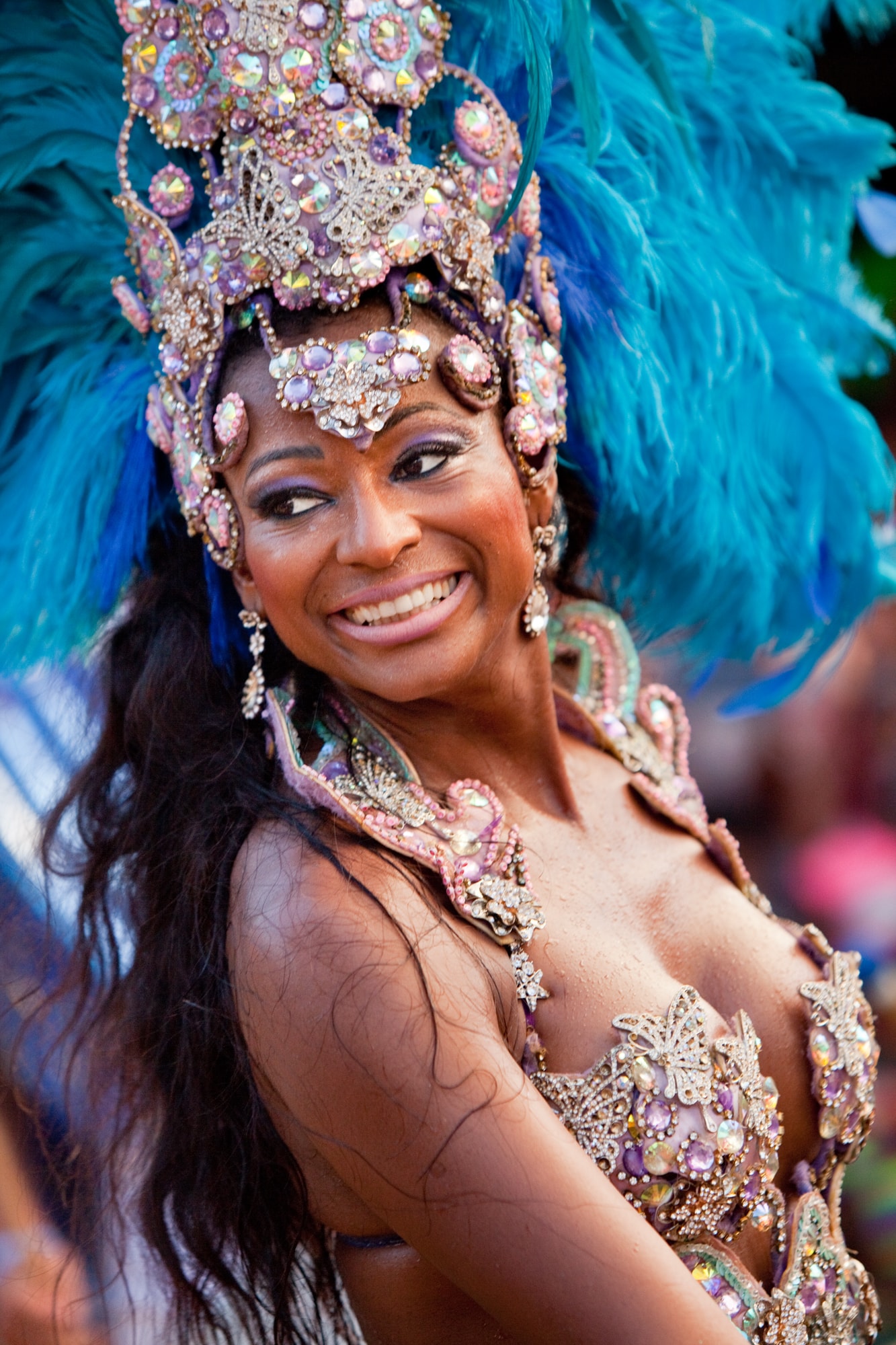 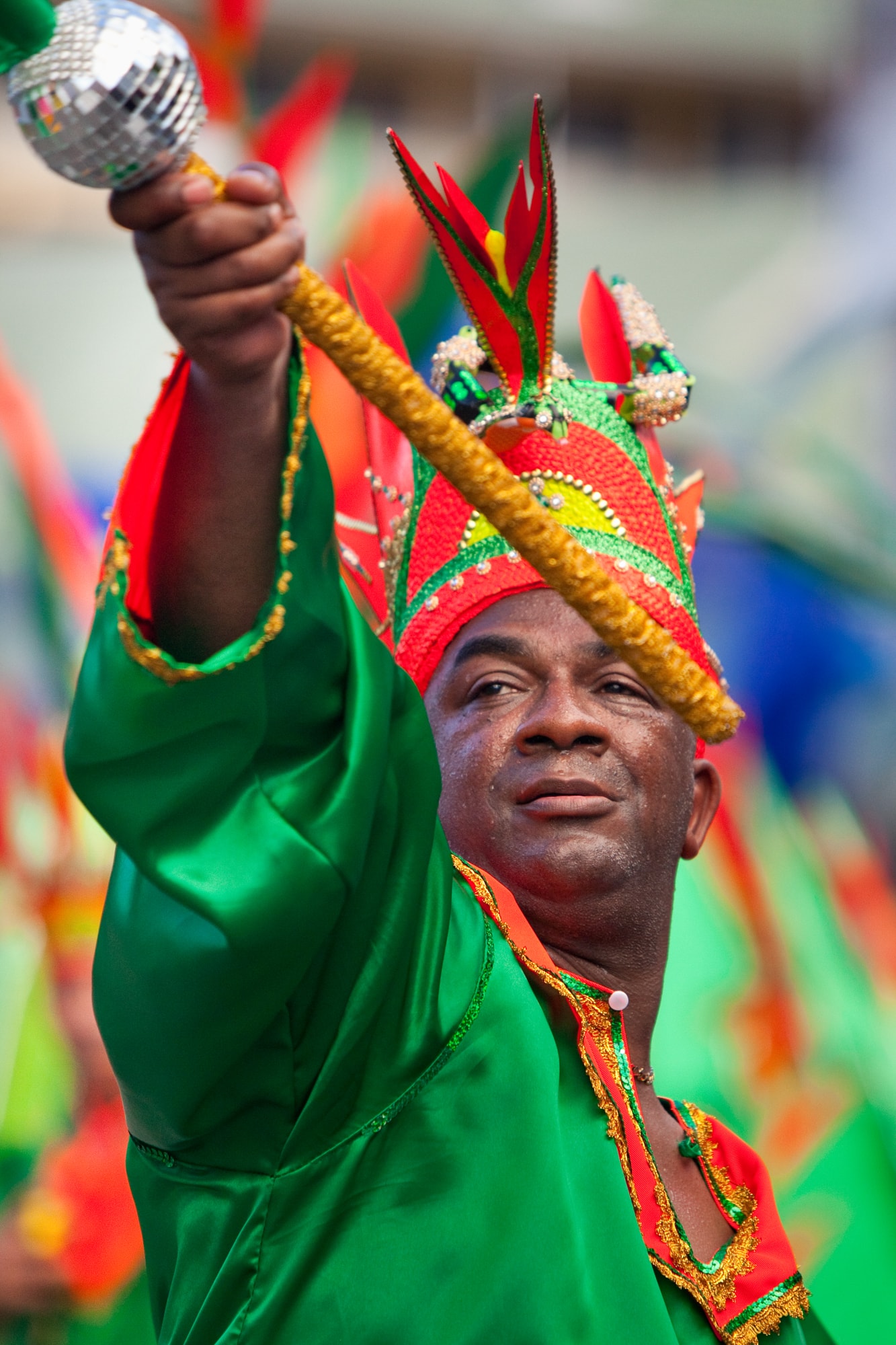 At the closing stage show on day three, a surprise act from Liao Nan Province in China that wowed the crowds with their acrobatic, stilt-walking and opera group, is awarded Best International Float. It’s my cue to escape from town and see some of the outer islands.

An hour’s ride east on passenger ferries lands me first on Praslin and then La Digue Island. This is where Tom Hanks filmed Castaway, and its azure raises even the sun-bleached eyebrow of this South Pacific veteran. I crisscross the island by mountain bike, dodging ox-carts and pulling into pristine white sand beaches curiously framed by curving boulders. I can’t resist cold beers with speared reef-fish in the beach-shack restaurants before some (careful) boulder climbing and swimming.

From a high point looking out to sea I spot yet more islands on the horizon and can’t help imagining the pirate treasures of legend buried in secret coves and bays throughout the archipelago. I’m tempted to go in search of them, but looking back onto the inviting waters of Grand Anse beach it clicks that these islands themselves are treasure enough. 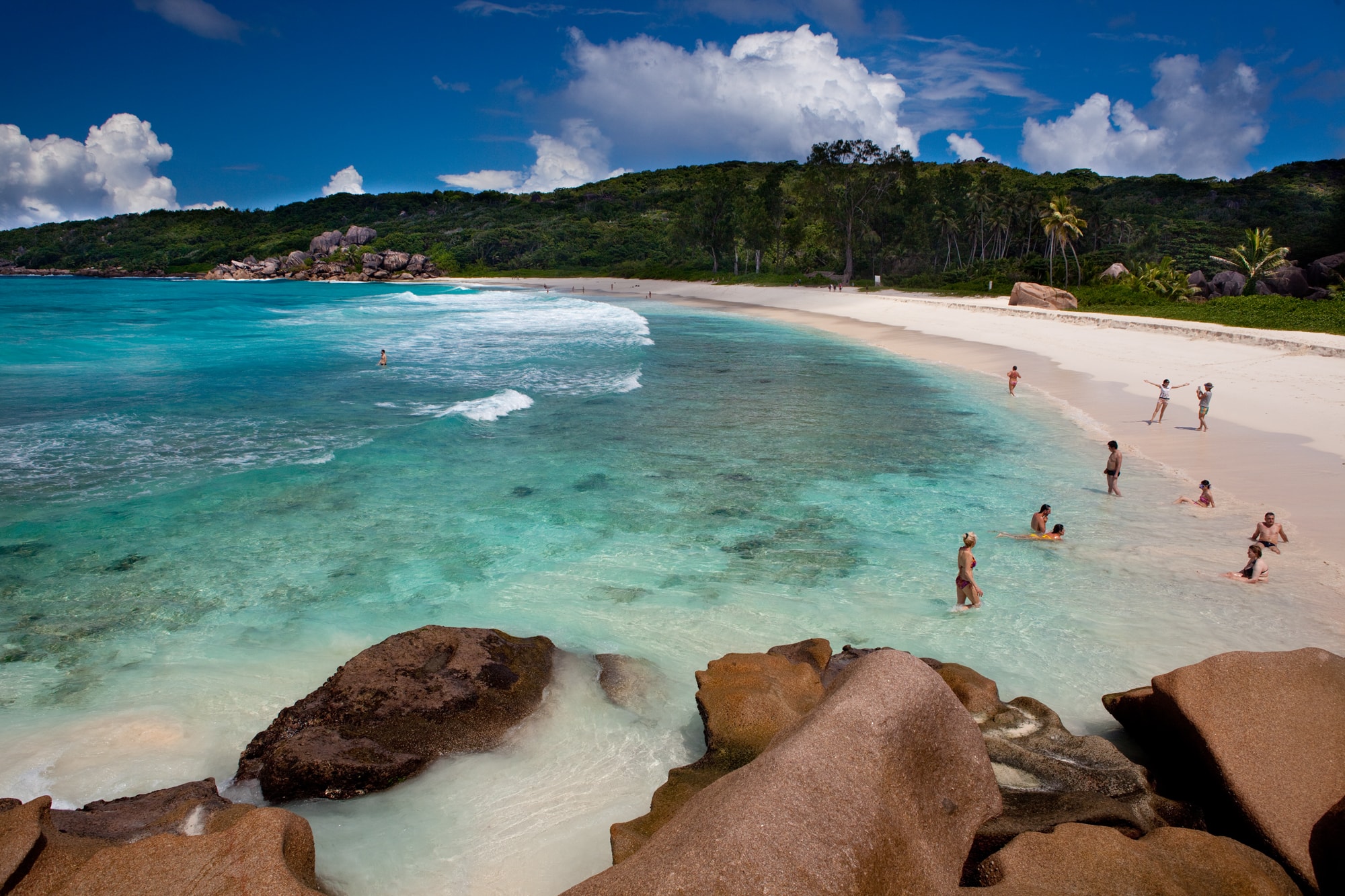 A true slice of paradise, the Seychelles does tropical luxury like nowhere else in the world. Head on a yachting trip, enjoy eco-friendly adventures, and dive among rainbow-coloured reefs with Lightfoot Travel.

Far from the madding crowd

ARTIST IN RESIDENCE ON A TROPICAL ISLAND

Botanical artist Lucinda Law visited the eco-retreat of Batu Batu to highlight the need to help save the environ...

If you need to get away from it all, take your luggage to one of these holiday hideaways