SAILING DOWN THE AMAZON

by Lightfoot
Andrew Marshall lives out his dream of travelling the mighty Amazon River through Peru, Colombia and Brazil...

Absolute mayhem. People shouting, bodies pushing, a zillion three-wheeled motorcycle taxis screeching and honking horns. Men with heavy loads on their backs stream back and forth from the many boats tied bow first to the docks. The British consulate in town had clearly warned me, "It's at the port just before you board the boat that you have to watch our for hustlers.” This is the Amazon River, Iquitos, Peru.

Here in Iquitos, the age-old vision of the Amazon River as a watery wilderness that crosses a continent flanked by steaming rainforest, teeming with wild animals and populated by isolated communities of indigenous Indians couldn't be further from the truth.

I can't remember when I first had the romantic notion to travel the length of the Amazon River, and for some reason I'd always imagined doing it by dugout canoe. But time and reality have made drastic changes to both my dreams and the river, and by the time I find myself on banks of the Amazon in Peru, the boats have become bigger and the river has become a highway for the endless tide of land-hungry humanity that has populated its furthest reaches.

The lifeline of the river communities is the boats. Mostly constructed of wood (many are in a disreputable condition and way overcrowded),  they ply the river creating a super highway of commerce. Laden with all types of cargo, from vehicles and livestock, to farm machinery, boxes of groceries and building materials, the ferries are the Amazon's public transport system and I have come to travel and experience it the way the locals do. 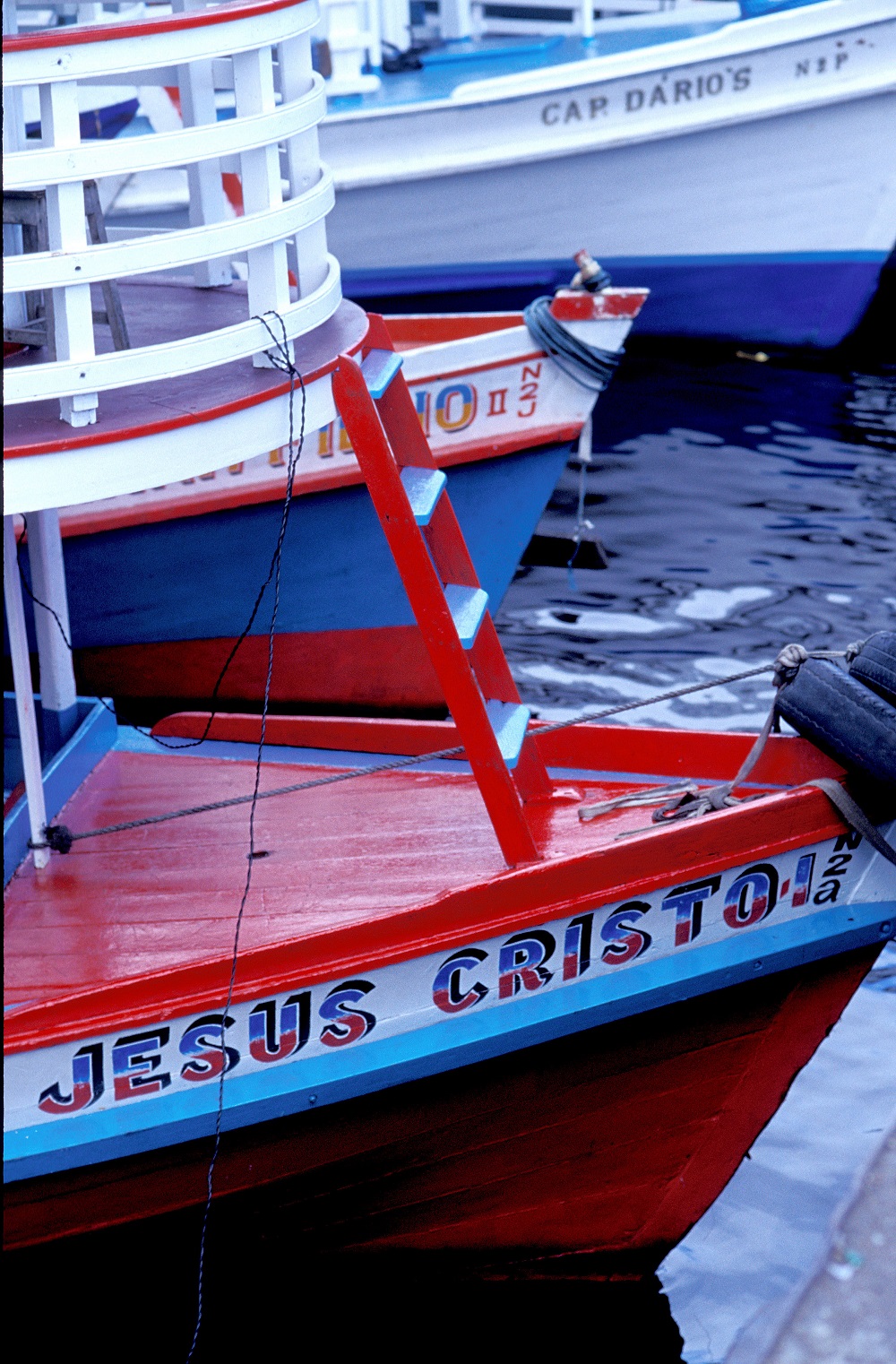 My accommodation for the three-day trip to the Colombian/Brazilian border towns of Leticia and Tabatinga is deck-class hammock, BYO or 'bring your own' of course. Arriving two to three hours early is the only way to make sure you get the best position on your chosen boat to hang it, thereby avoiding the multitude of annoyances that can besiege a passenger.

Hang your hammock by the stairwell and you will be woken up as people talk night-time trips to the bathroom. Hang it below one of the many light globes, and you'll enjoy the full benefits of observing the Amazonian insect life at close range. I find myself sandwiched hip-to-hip between an entire family in a double hammock and some giggling teenagers.

On the second day of my journey we hug the northern shore close enough to view the interminable tangle of vegetation; vines that climb, smother and strangle, epiphytes that claim lofty anchorages in the limbs of trees, and the crowns of towering rainforest giants. If I watch for long enough, I am rewarded with occasional glimpses of squirrel monkeys working their way along a highway of tree limbs, or the dark slumbering shape of a sloth in the jungle canopy.

By day three I am thoroughly in love with riverboat life - it's like one big pyjama party with lots of friends swapping hammocks. I have named the pig that lives in the sack below me, Alfredo, and have pressured the crew to allow it free reign on a leash. Carlos and Carmina and their two children in the hammocks next door are best friends, and I have yet to fall ill on the beans, chicken and rice that we are fed three times a day. When we pull into small pueblos along the way, there is enough time to get off, stretch the legs and meet a few locals.

Leticia in Colombia is not what I had imagined it would be. This sleepy port seems to be inhabited mainly by Colombians that have escaped the rat race of violence that typifies the rest of the country. Mention Bogotá or the Medellin cartel to locals and they roll their eyes and shudder, then proudly tell you that here, they can leave their doors unlocked at night.

Just across the border in Tabatinga, Brazil, I get lucky and find a boat leaving for Manaus the same day. Sometimes you can be left waiting days for an onward passage. By the afternoon we are off once again. The mighty Amazon River is many kilometres wide at this point, but is dissected into so many channels and branches, that at times you might be led to believe it is only a hundred metres wide. What looks like a solid length of riverbank, inevitably reveals itself to be an island with yet another channel beyond.

Life on board slips into a leisurely pattern. Swinging in the hammock chatting to neighbours and practising my limited Spanish and Portuguese is the major pastime. On the top deck, singer Renaldo Vincinetti croons Portuguese love songs into a microphone. Cervezas (beers) are plentiful and the mood is languid. 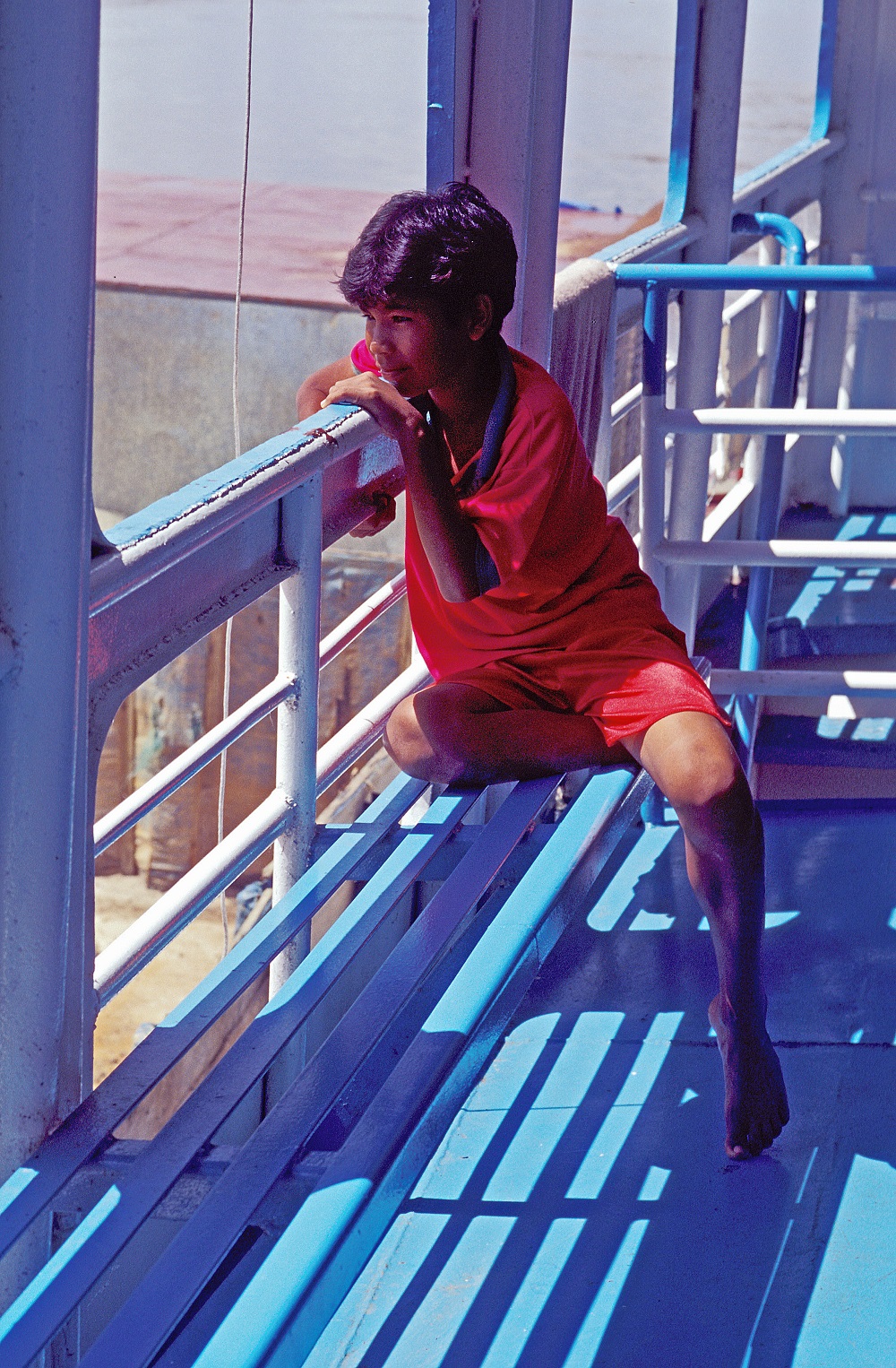 Seated on the rail gazing out across the river is what I like to do most. Breathing in the sultry humidity, I wonder how many ways you can describe the beauty of the Amazon River? At dawn she is a liquid path of new light reflecting all the colours of the sky, from pale blue to rose red and pink. Where the mysteries of her currents form whirlpools, pure gold gilds the ripples casting rings of light along her length.

At dawn the Amazon is a liquid path of new light reflecting all the colours of the sky, from pale blue to rose red and pink.

At midday she is interminable. A brown ocean covered in floating debris with islands of aquatic plants adrift on the currents, arks of life blooming with purple lilies. Sometimes great tree trunks drift by, ripped up by their roots in some violent storm up river.

In the late afternoon, when the heat of the day builds to a steaming furnace and culminates in a tropical storm, shafts of white lightning streak the sky, raking the rainforest with angry fingers, casting a strobe light show across the waters.

But when it is all over and the sun is once more a molten ball sinking on the horizon, the small communities whose timber huts line the riverbanks, steam in the golden light. It's the time of day when all the chores are done, and families re-emerge to relax on their verandas, while children splash in the shallows.

I am enthralled by this riverside pageant of life viewed from my floating observatory. I already know, that by the time I will have travelled the Amazon River from its source in the glaciers of the Peruvian Andes, to the river mouth on the Atlantic Ocean, it will be the people and their special relationship with the river that will leave the most  lasting impression.

The Amazon Rainforest covers a huge swathe of northern Brazil, bisected by the 4,400 mile Amazon River and the Amazon Basin, well over half of which is located in Brazil.