by Lightfoot
Did you know that they didn’t have to visit Washington DC to find the White House?
01
Mustique

While Princess Margaret had a home on the island of Mustique, The Crown team chose to fly not as far and Les Jolies Eaux was recreated in Malaga, Spain. Homeowners on the Caribbean island of Mustique make sure that it keeps its Robinson Crusoe vibe. While it may be a playground for the rich and famous, they refuse to let those VIP trappings arrive. There is no airstrip on the island, the water is too shallow for megayachts and the dress code is barefeet.

Again, not all is as it seems. The Crown cast didn’t fly to Washington DC, but took a short drive to Hylands House in Chelmsford. Visitors can take a tour of this heritage building once a month and find out more about its history. This Georgian home has become an artists’ enclave with seven working artists based in The Stables, which also features a café and bookshop. The estate has 574 acres of parkland, which is open to the public. But unfortunately for Donald, no golf course.

If you don’t get invited for tea at Windsor Castle, you can take a peak at Belvoir Castle, which has starred as Windsor Castle in all three series. Home to the Duke of Rutland’s family since 1067, this is one of the finest examples of Regency architecture in the world. You can take a tour of the house and the grounds as well as the Engine Yard, which is a series of former artisans’ cottages that frequently houses a farmers’ market.

This is one location that the props team didn’t need to recreate for they shot the scene that depicts The Prince of Wales' investiture at Caernarfon Castle. Millions of people turned in around the world to watch the ceremony on 1 July 1969 and now they are doing it again 50 years later. But if you’re a history buff or Instagram fan you will want to visit it yourself for this Medieval fortress that’s filled with drama.

The picturesque town of Rye in Sussex, England became a small Scottish village for the day. Helena Bonham Carter was spotted in the town where shopfronts on the Medieval half-timbered street were changed and 1970s' cars filled the charming cobbled streets.

With plenty to offer for all the family, England is steeped in history and yet remains one of the most diverse places in the world 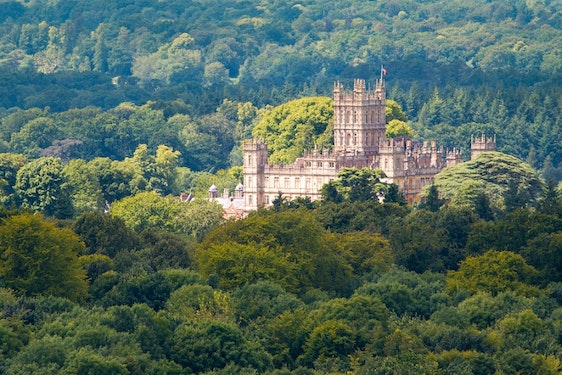 To celebrate the launch of the Downton Abbey Movie this month, we have highlighted some of the prettiest locations fr...

﻿Just in case you can’t have tea with the Queen, here ar...

GQ Editor Dylan Jones has been showing men in Britain how to put their most stylish foot forward since he took over t...