PERU THROUGH A PHOTOGRAPHER’S EYES

by Lightfoot
Andrew Eames travels in the footsteps of his hero – National Geographic photographer Martin Chambi. Grab your camera and discover the culture and colours of Peru for yourself with Lightfoot Travel.
I’m 3,400 metres up in the Andes, following in the footsteps of a photographic hero. There’s a rumour that some of his work can be seen in the Palacio Tupac Yupanqui, a former Inca palace in Cusco, but at street level the palace is occupied by the regional branch of a Peruvian bank, busy and bright. It doesn’t seem the right place for an exhibition of classic images, but when I mention the photographer’s name to security, I’m ushered towards a corner staircase that leads up to a dimly lit first floor.
Chambi’s shots have inspired generations of travellers.

In the end the lighting really doesn’t matter, because I’m already familiar with much of what I find there. In these dimly lit rooms are black and white prints from the 1930s and ’40s, a time before the rest of the world knew much about Incas and alpacas, condors and cordilleras. Among them are portraits of leathery-faced Andean miners resting after a shift, and a Quechua family sitting proudly on top of their potato harvest, their immediate future safely secured. 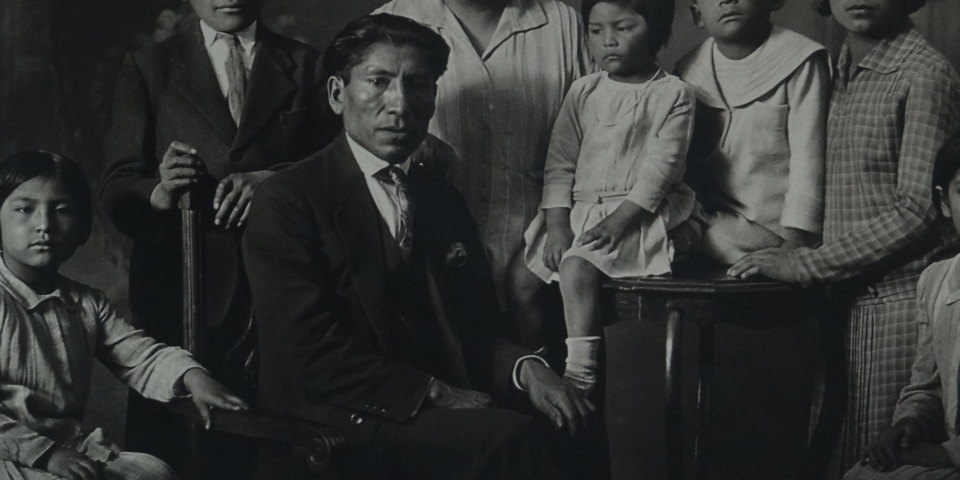 In one corner, an indigenous porter stands next to his lama on a mountain top, while playing his flute to pass the time. Next to him is a striking studio-based wedding photo complete with deeply worried-looking bride and groom, lit like a painting; a whole novel right there, in just one photo. In another room rich colonial families, photographed in their finery and with their thoroughbred horses, pompous and proud against the austerity of the Andes, are contrasted with local street children, grubby and defiant in the narrow stone-flagged lanes of Cusco. And then of course there are the iconic photographs of Machu Picchu itself, looking like engravings in black and white, taken barely a dozen years after the Inca city was first discovered. These are images that every traveller with a camera aspires to, captured by a photographer who clearly had a tremendous rapport with his subjects. And they are images which continue to attract travellers to this corner of the world, with its ethnically mixed population, razor sharp air and intensity of light.

My photographer hero is called Martin Chambi, and his assignments for the early years of National Geographic were instrumental in bringing the exoticism of Peru to the attention of the wider world. But whilst other photographers for that magazine were scientists and explorers from privileged backgrounds, Chambi was from a Quechua peasant family, working with cast-off equipment. Technology may have moved a long way since then, but his standard of photography remains hard to emulate. It hasn’t stopped me from coming here to try.

As well as the exhibition, I have tracked down Chambi’s archive in Cusco. Here his grandson, Teo, shows me Chambi’s cameras and the studio backdrops and tells me the story of how his grandfather, as a 15 year old boy from peasant background, got a job with an international mining company as a camera bearer. It was the British photographer he worked for who first encouraged him to have a go behind the lens.

He was a fast learner, and for the next 40 years he ranged all over the Andes, lugging a heavy plate camera and tripod. With it he documented both his own people and of the middle-class settlers from mainland Spain whose studio fees kept him in business.

All of this is in the archive. After we have admired Chambi’s delicate touching-up of many of his glass negatives, I ask Teo where I should go to get a flavour of his Peru today. He directs me to the city’s San Pedro market, and sure enough, I find stalls manned by eye-catchingly handsome ladies wearing traditional Quechua wide-brimmed hats. There they are surrounded by the likes of rams’ testicles, smoked guinea pig, and bags of offerings to the gods of the earth and the sky. It is all good Chambi-like material.

And there are more potential subjects in the lanes around Cusco’s main square, where Inca-descended and colourfully-dressed locals in woollen chalecos (traditional waistcoats) stand with their lamas – but these people are waiting to be photographed, for a fee. I feel sure that Chambi wouldn’t approve.

Travelling out of the city, en route for Machu Picchu, I have more luck. Village life and a salt works provide a good source of modern-day images, but Machu Picchu draws me on.

Sadly I don’t have time for the four-day Inca Trail, and the only other access – the train ride down the valley of the fast-flowing Urubamba River – is visually unrewarding. But I like the final stop at Aguas Calientes, where porters and railway locomotives share the streets with tourists and souvenir shops. 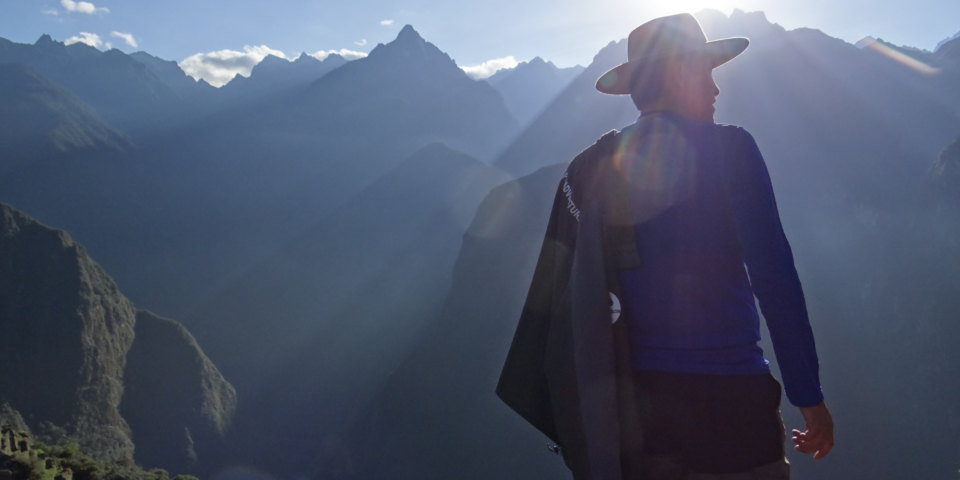 Machu Picchu itself sits astride a high shoulder of land, some 400 metres above Aguas Calientes. Surrounding it, in a protective semi-circle, is a ring of high Andean peaks.

I make sure I get in when the gates open at 6am. Gradually, the slow climb of the sun burns off the morning petticoat of mist, revealing an intricately-engineered city, Inca meets Escher in a labyrinth of hand-polished stones. There are divisions and subdivisions with fountains and plazas for farmers and rulers and temples and nobody really knows what. Or even why such a perfectly-placed jewel of Inca geometry was abandoned so suddenly.

Chambi’s photographs of Machu Picchu are mostly empty of people, barring the occasional campesino in a hat to give a sense of scale.  My challenge is to crop out the avalanche of gap-year travellers blazing away with selfie-sticks, calling everything ‘awesome’, announcing that they are about to ‘do a pano’.

I get a couple of pictures I like. A local in his cape, with echoes of one of Chambi’s lone campesinos, and a tourist interacting with one of the lamas. And as I review them, on the back of my digital camera, with all its adjustable settings, I think of Chambi, who never knew what he’d got until he returned to the dark room weeks afterwards.

His handful of images, however, are still admired today by people from all over the world. And while the shots of today’s visitors will excite family and friends, Chambi’s shots have inspired generations of travellers.