A horseman gritting his teeth and pulling as hard as he could on a dead goat’s back legs came thundering towards me on horseback. Galloping equally fast was another rider pulling the goat’s front legs in a viscous tug of war. I was at the annual Golden Eagle Festival in Mongolia’s westernmost province, Bayan-Ulgii. There were no bleachers or chairs and the only way to watch was either on horseback or standing. As both riders refused to give in, their horses kept changing direction. Suddenly I was completely hemmed in and was sure I would be trampled. I screamed. Three small boys riding one horse pointed to me and laughed. Finally, the tug of war moved off in a different direction and I could breathe again.

Ever since reading Jack Weatherford’s book, Genghis Khan, the Making of An Empire, I’ve wanted to come to Mongolia and this seemed a perfect time to do so. I spent some time in Ulaanbaatar, Mongolia’s capital, then drove with a private guide and driver through the Gobi Desert where I tried to gallop through the plains. Mongolian horses might be small, but they’re very fast. They also know immediately if you’re afraid like my horse, who sensed my terror and refused to budge; that’s why, when my guide asked if I wanted to rent a horse for the festival, I couldn’t say no fast enough. 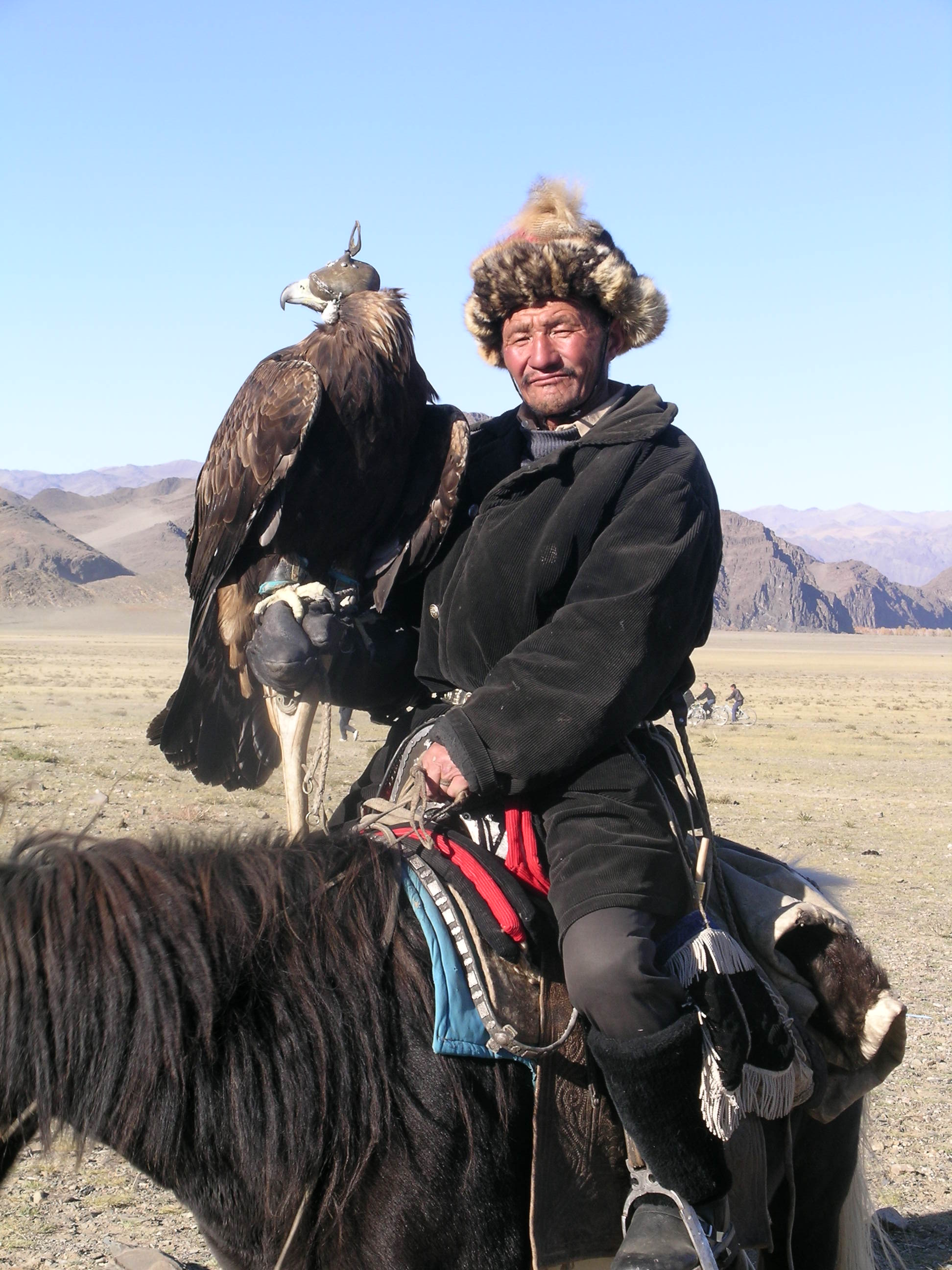 Kazakh herders are not only excellent horsemen; they train golden eagles to hunt fox and rabbit, a tradition passed down from their Turkic ancestors. Each October, around 60 eagle hunters gallop across the Altai Mountains to Bayan-Ulgii, many riding from as far as 150 miles away to a barren valley, void of a tree or bush or single blade of grass. They come to compete in a two-day display of traditional hunting skills based on the eagle’s speed, agility and accuracy. Now in its 20th year, the Golden Eagle Festival is a way of preserving the Kazakh’s traditional heritage of hunting with eagles.

The festival began this morning when way in the distance I saw the eagle hunters with the large birds of prey perched on their arms. When they arrived, they were happy to pose for photos, proudly showing off their eagles’ seven and eight-foot wingspans. Little by little, more and more spectators, most on horseback, trickled in. The families of the hunters and crafts sellers also arrived, mainly in 4WD vehicles. I watched as they quickly set up their gers, round felt tents which they filled with painted wooden beds, kitchen utensils, and colorful rugs. 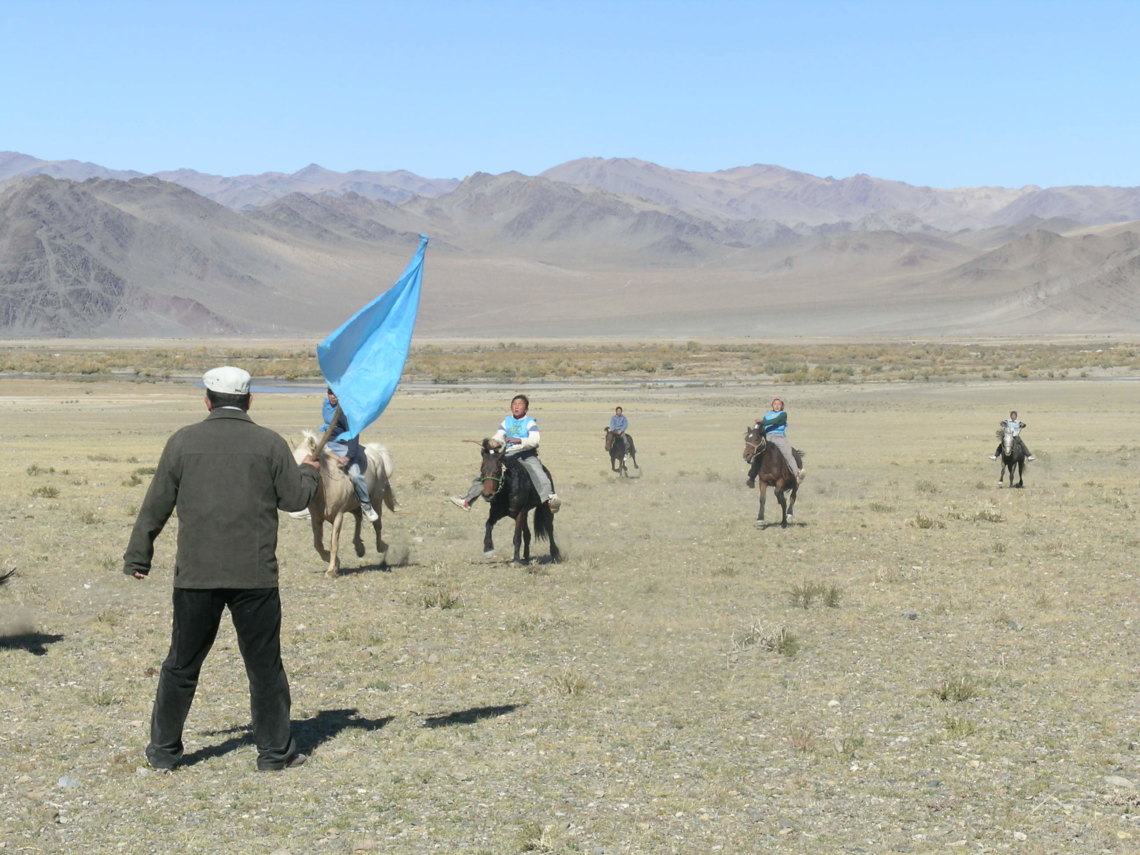 The first event was the parade of competitors, each with a hooded eagle perched on his gloved hand and each wearing an embroidered robe and red silk hat lined with fox fur. A group of judges sat at a table and rated the participants from one to 18 for the most elaborate clothing and accessories. I couldn’t stop staring at the eagles, all females because they’re fiercer birds of prey. I wondered what would happen if one broke away and attacked me with her long talons and sharp beak. I moved further back. When the parade was finished, the hunters had to ride their horses while carrying their eagles up a 1,000-foot cliff strewn with boulders. They left their eagles up top with a helper and rode back down the steep cliff face.

Back on level ground, the goat tug of war declared a winner and the eagle agility skills began. In the first event, the hunter on the ground broke into a gallop while calling his eagle who rocketed down towards the hunter. Whoosh. Eagles can dive at speeds up to 200 mph and ancient tribal cultures have always regarded them with mystic reverence. Everyone was in awe. One after another, they swooped down. Suddenly one of the eagles chose not to land on his owner’s arm and flew away as the crowd laughed hysterically and the red-faced eagle hunter charged off in search of the missing bird. 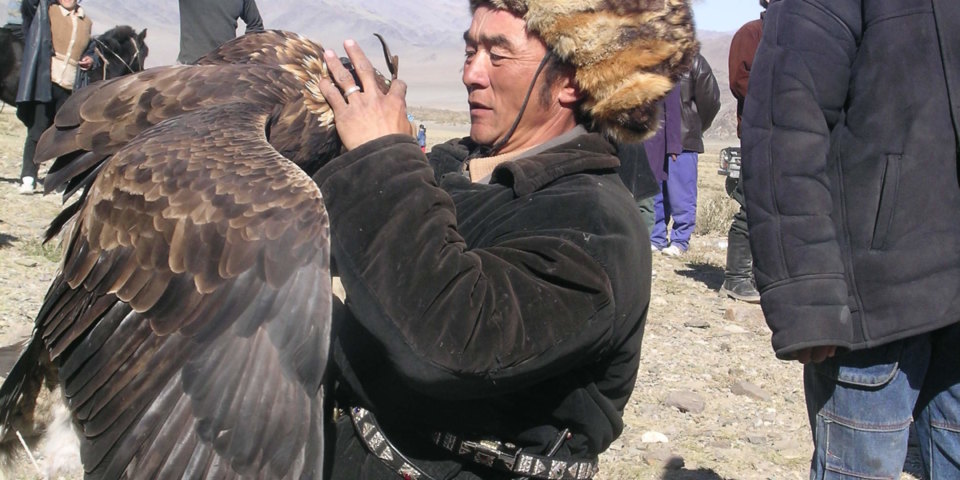 The Golden Eagle Festival offers many different types of sports, some going back to the era of Genghis Khan. I wandered past the area to watch a horse race in the distance with jockeys as young as seven years old racing along the plains as parents in 4WD followed, screaming out their encouragement. Closer by was an archery event where archers shot home-made arrows from hand-made bows to a small target about 30 feet away. Each time an archer hit the mark dead centre, which was most of the time, the spectators screamed out “HEE-da!” In another event, a horseback rider had to pick up a coin on the ground while riding full gallop. I watched for a while and then went to peruse the crafts. Just then, two riders galloped away at full speed in a game known as “Girl Chase,” in which only unmarried couples could compete. The object was for the female rider to whip the male rider. When I asked my guide why, he said, “If you can’t be whipped, you can’t survive.”

As I walked away from the crowd as two boys rode towards me on a bicycle carrying some large eagle feathers. They stopped and looked at me.  “Salem,” I said, the only Kazakh word I knew. They didn’t smile and I didn’t know what they were going to do, Finally, one of them approached and handed me an eagle feather before breaking out into a smile.

I keep the feather on my desk as a reminder of the boy’s smile and the fierceness and bravery of the golden eagle hunters. 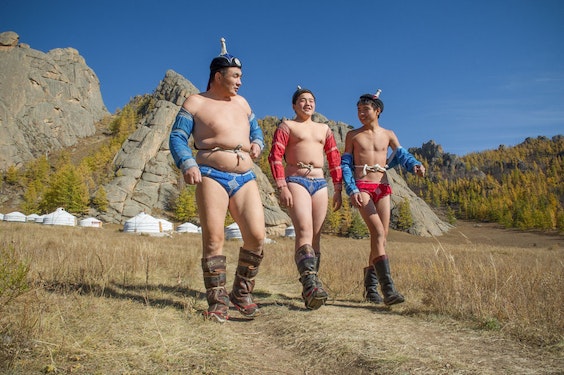