by Lightfoot
Madagascar is home to some of the world’s most unique wildlife. Lauren Jarvis has an up-close encounter with one of the island’s rarest – and noisiest – stars

The shrieking ricochets through the forest, as I quicken my pace, stumbling over gnarled palisander trunks and roots, low-hanging liana vines snagging my hair. Ominous rustling above tells me something big is on the move: and coming my way. But it’s to – not from – this unseen, arboreal singing beast I’m running.

The backdrop for my Jurassic Park moment is Madagascar – an island of ancient trees, blood-red soil and mystical beasts, cut adrift from Africa in the Indian Ocean. The search for one of the country’s most curious creatures has brought me to the Analamazaotra Reserve in Andasibe-Mantadia National Park, three hours drive east from the capital, Antananarivo. This giant swathe of protected – largely primary-growth – forest is extraordinarily diverse, home to 100 kinds of precious orchids, 80 types of amphibian, 50 species of reptile, and more than 100 species of birds, many endemic to the park.
I enter the reserve early morning with my Malagasy guide, Nina Saholy, and take one of the marked loop trails leading through arbors of tinkling bamboo into the thick forest. I’ve crossed a footbridge over a bubbling stream, stirring a kaleidoscope of butterflies from their rest, when I first hear the mournful cries that famously form the park’s dawn chorus: first one wail, then another joins, loudly echoing down from the canopy above. 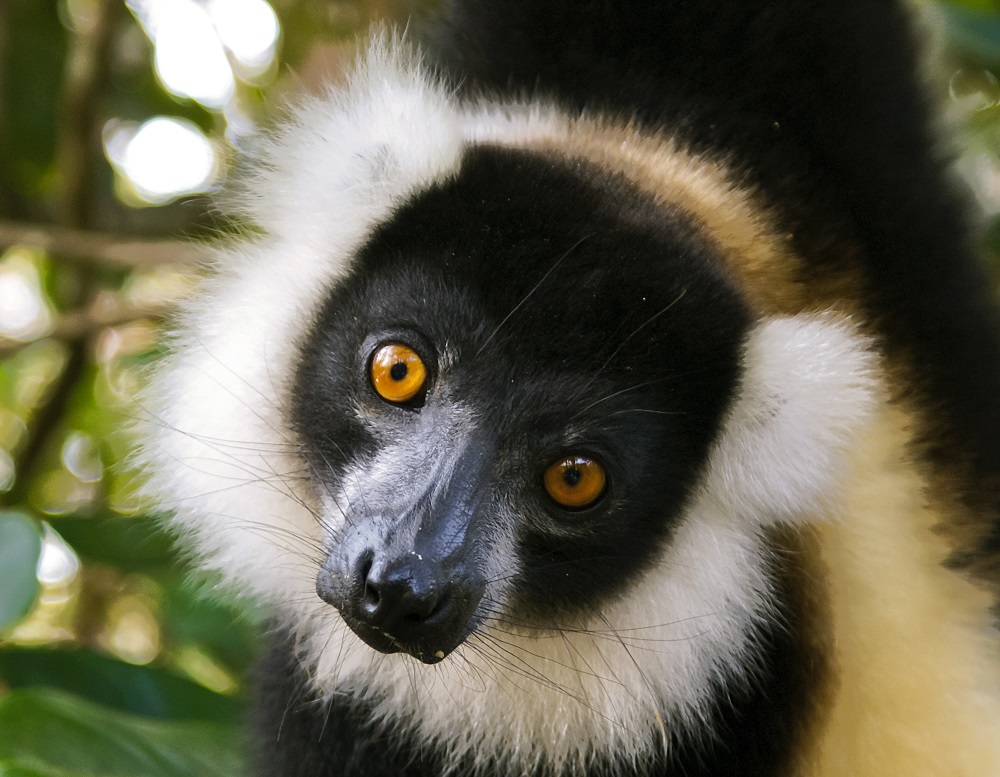 Walking in Saholy's footsteps, I follow the sirens’ call until the guide stops, looks up and points to a large, black and white shape clinging to a tree, green-yellow eyes piercing through the foliage. It opens its mouth and lets out a call that resonates through the body and speaks to the soul, like the melancholic of whales spanning the oceans: it’s the call of the indri, the largest lemur species in the world.

Lasting from a few seconds to several minutes, the indri’s song can carry up to two kilometres.

Lasting from a few seconds to several minutes, the indri’s song can carry up to two kilometres. Up close, with several animals contributing to the choir, their eerie screams could easily be the stuff of nightmares. But this musical harpy is far more teddy bear than T-Rex. Around 70cm tall and weighing up to 9kg, its tufted ears top off a fluff-covered body, while a stumpy tail differentiates the indri from all other species of lemur, found in Madagascar, a fact that may have given rise to a myth that the ‘babakoto’, as its known locally, was once human.

Living 10 to 30 metres up in the trees in family groups, the indri is one of the world’s few ‘singing’ primates, using their calls to communicate, raise alarms and stake out their territory up to seven times a day, starting at around 7am. Sweetly monogamous, the lemurs mate until one of the pair dies, and regularly cuddle up to their companions when they’re not foraging for flowers, fruits, seeds, bark and leaves.
“They’re complex, fussy eaters,” says Saholy, as we stand and watch the indri watching us. “They’ll only eat wild, native plants, so they can’t be kept in captivity. No bananas for them!” 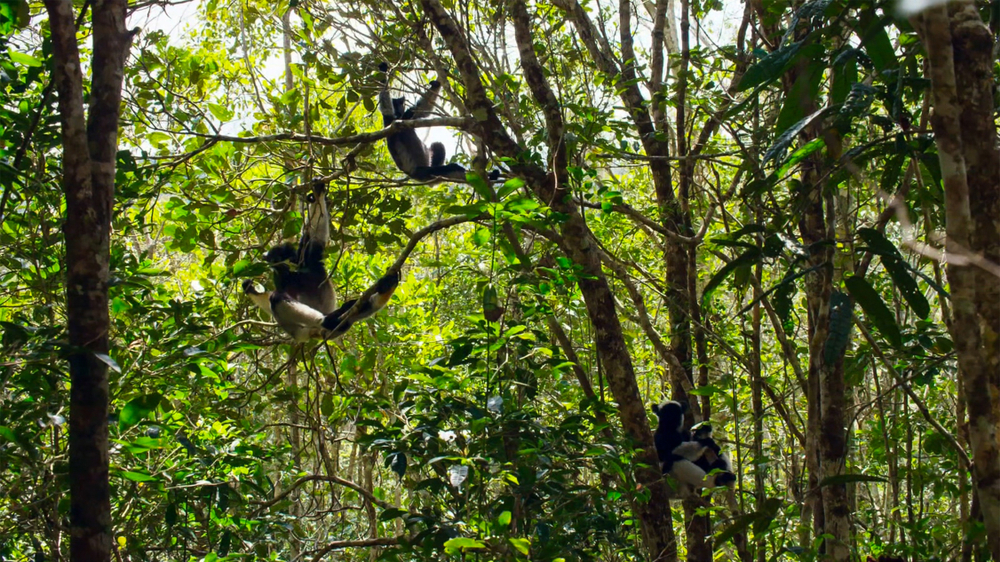 With other ‘sanctuaries’ on the island tempting Madagascar’s iconic ring-tailed lemurs on to tourists’ shoulders for selfies with treats, and comedic Verreaux’s sifaka lemurs being encouraged to ‘dance’ for their supper, showcasing their impressive two-legged sideways leaps, some might see this as a blessing. But with the indri critically endangered, and the country’s other lemur species also drastically in decline, captive breeding and animal relocations are some of the survival measures being explored to save them.
In 1998, Conservation International named Madagascar one of the world’s 18 ‘megadiverse’ countries, due to its vast number of endemic species, found nowhere else on earth. The break-up of supercontinent, Gondwana, left the island in perfect isolation for millennia, allowing thousands of unique species to evolve and thrive – among them, half the world’s chameleons and over 100 types of lemur. But a 2018 report by the International Union for the Conservation of Nature (IUCN) revealed that Madagascar’s prized primates are in trouble: 105 of 111 species are under threat from habitat loss, poaching for meat and climate change. With 95 per cent facing extinction, they are now officially the most endangered group of mammals on the planet.
“The indri are well protected in Andasibe,” says John Razafindrakoto, my tour guide for my trip around northeastern Madagascar. “There are researchers working here, and park rangers to help combat any poaching. But there’s also a local ‘taboo’ about killing indri as they are perceived to be very close to humans, although sadly other species aren’t all so lucky.” 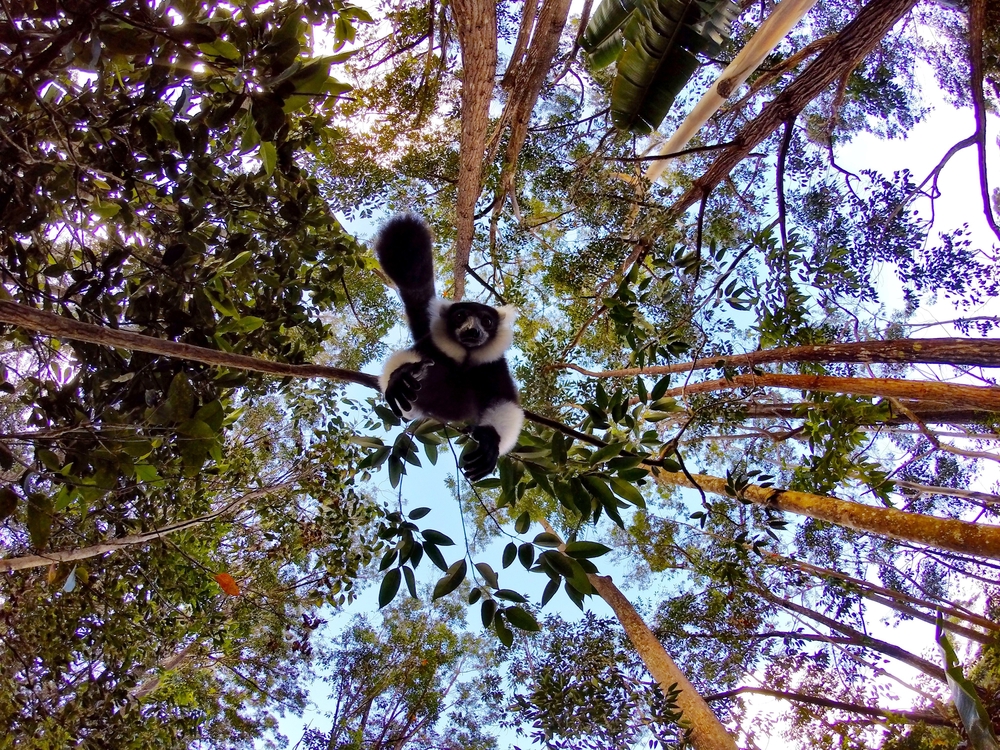 Andasibe-Mantadia National Park is also home to the black and white ruffled lemur.
Encouraging the Malagasy people to protect their island’s wildlife – and to understand the resulting benefits to local communities through ecotourism – is key, but no mean feat in a country where many are struggling to feed their families.
Driving from Antananarivo, Razafindrakoto points out rice fields where once there was forest, and rising smoke as trees are cleared for charcoal or to plant crops. “There is still a ‘slash and burn’ culture here,” he tells me, when we stop at a restaurant for lunch. “Awareness programmes are in place, but it’s still taking its toll on our forests, and our wildlife.”
Despite 52,000km2 of beautiful, natural habitat currently being protected, many of Madagascar’s magical beasts have found themselves once more marooned: this time on fragmented islands of wilderness, surrounded by villages and farms.
I follow Saholy slowly out of the forest, the lemur I’ve left behind me still crying as its mate returns its call. For now at least, here in Andasibe, it feels good to know that the indri will keep on singing their song.
Live Chat
Email
Enquire Now
+1 917 4709 804
Suggested Itineraries