Living In The Oman Desert | Travel By Lightfoot

LIVING IN THE OMAN DESERT

Opening my eyes to see thorny branches silhouetted against the bright blue sky, for a good few seconds I had no idea where I was. Then the stiffness in my limbs brought it all back: sleepy from the heat and hours spent trying to stay on a camel, I’d fallen into a doze on a blanket under a tree as Humeid, my guide, prepared lunch on a camp fire.

Moments later he set a large metal sharing dish in front of me, ripped the flat bread he had just made from scratch into small pieces, poured half a litre of UHT milk over them, and invited me to tuck in. Without doubt one of the blandest meals I’ve ever eaten, but one I’ll certainly never forget.

I was spending a few days at a traditional Bedouin camp in the Sharqiya Sands, a desert region in the east of Oman that’s been home to this itinerant people for generations. Humeid’s father first began welcoming tourists over 20 years ago, offering them a slice of Bedouin culture a world away from the bright lights of Oman’s modern capital, Muscat. 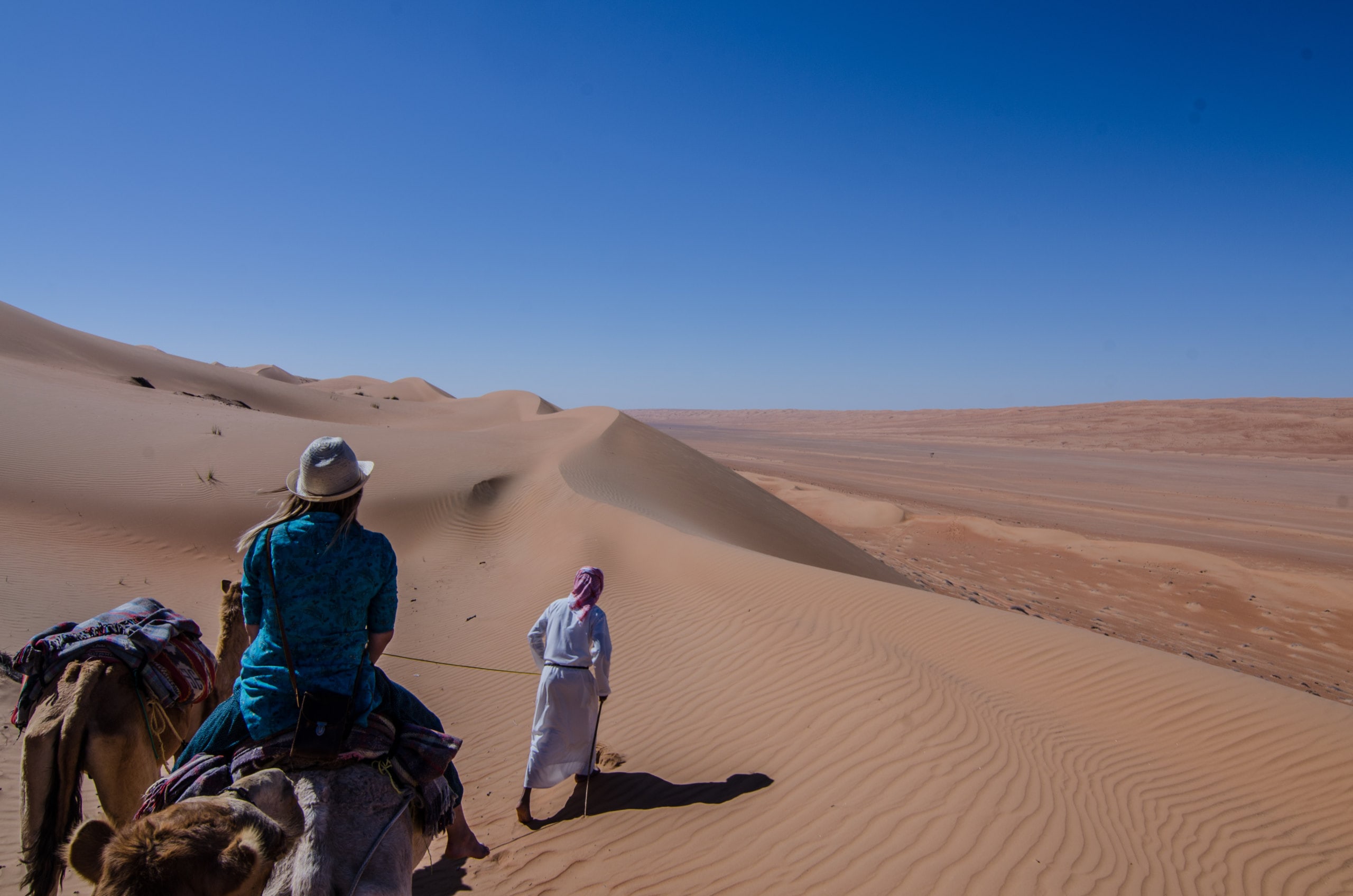 There’s no road through the desert to reach the camp, just some tyre marks in the sand that led me to a wide circle of sturdy-looking huts arranged around a solitary palm tree. The silence was the first thing that struck me as I settled in – no planes flying over, no bird song, not even the buzz of insects. Absolute peace and quiet.

With afternoon shadows lengthened over the camp, Humeid suggested we catch sunset from the top of the high dunes a short drive away. Easier said than done – climbing the 30-metre dune felt like scaling a wall and it wasn’t long before I was out of breath. I flung myself to the ground at the top, enjoying the coolness of the sand just below the surface after my exertions in the still hot desert sun.

As the infinity of dunes changed colour in the shifting late afternoon light, we were served dates – the freshest and stickiest I had ever had – and strong black coffee brewed on a tiny fire Humeid built on the top of the dune. With no fanfare, the sun dipped below the horizon, and a moment later a brisk wind began swirling the tiny particles of sand up into little tornadoes. Ill equipped for the sudden chill in the air, I headed back to the Jeep, taking giant steps back down the dune that felt almost like falling, the sand running downwards in the channels caused by my footprints.

Night had fallen by the time we got back to the camp, the only illumination from flickering candles and the occasional flash of torches carried by my fellow guests. But a bright moon lit my route to an outdoor dining room where a buffet of simple Omani dishes awaited. I tucked into grilled chicken, vegetable stew, rice, salad and flat breads, then drank hot sweet ginger tea on a pile of rugs arranged around a camp fire burning wood gathered from the desert. 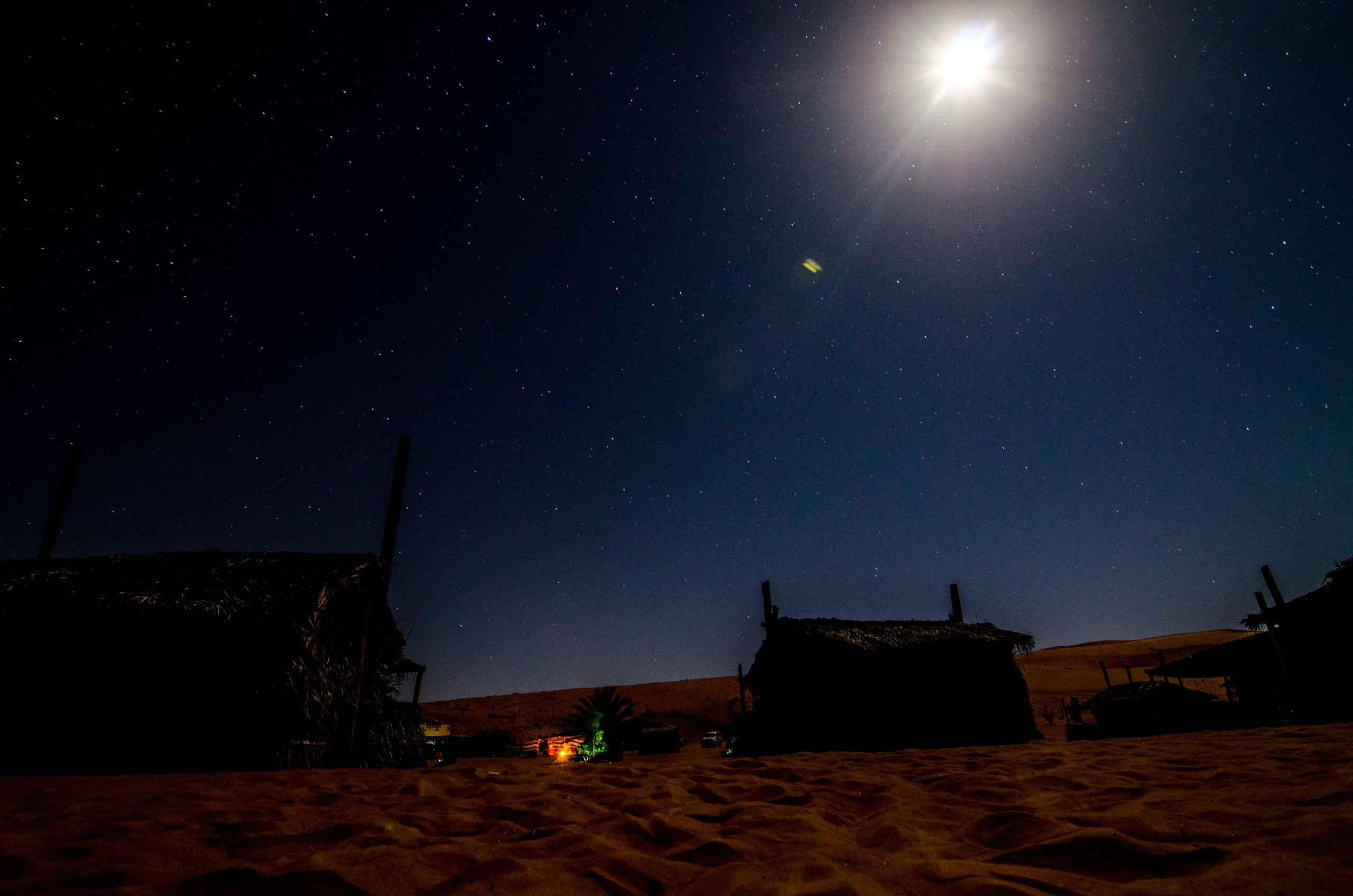 I had planned to stay up late enough to catch a glimpse of the stars after the moon had set, but it wasn’t long before the cold night air got the better of me. My little hut – and in particular the pile of blankets on the narrow camp bed – beckoned. Moments after blowing out my candle, I was asleep.

It was lucky my bed was comfortable, because my seat the following day – perched high on the hump of an 18-year-old camel called Tabian – was rather less so. What that all-day camel trek lacked in soft furnishings, however, it more than made up for in magnificent desert vistas and otherworldly silences.

Humeid riding up in front, my camel tethered securely to his, I had nothing to do but drink in the view. I marvelled at Humeid’s ability to navigate through the sands, making clicking noises and gently tapping his camel on the shoulder to guide its path. With nothing bigger than low clumps of tough grass and the shapes of the undulating dunes to use as waymarkers, we could have been riding around in circles for all I knew, until gradually my eyes grew accustomed to the subtleties of the landscape and I was able to look back and more or less make out the route we’d followed. 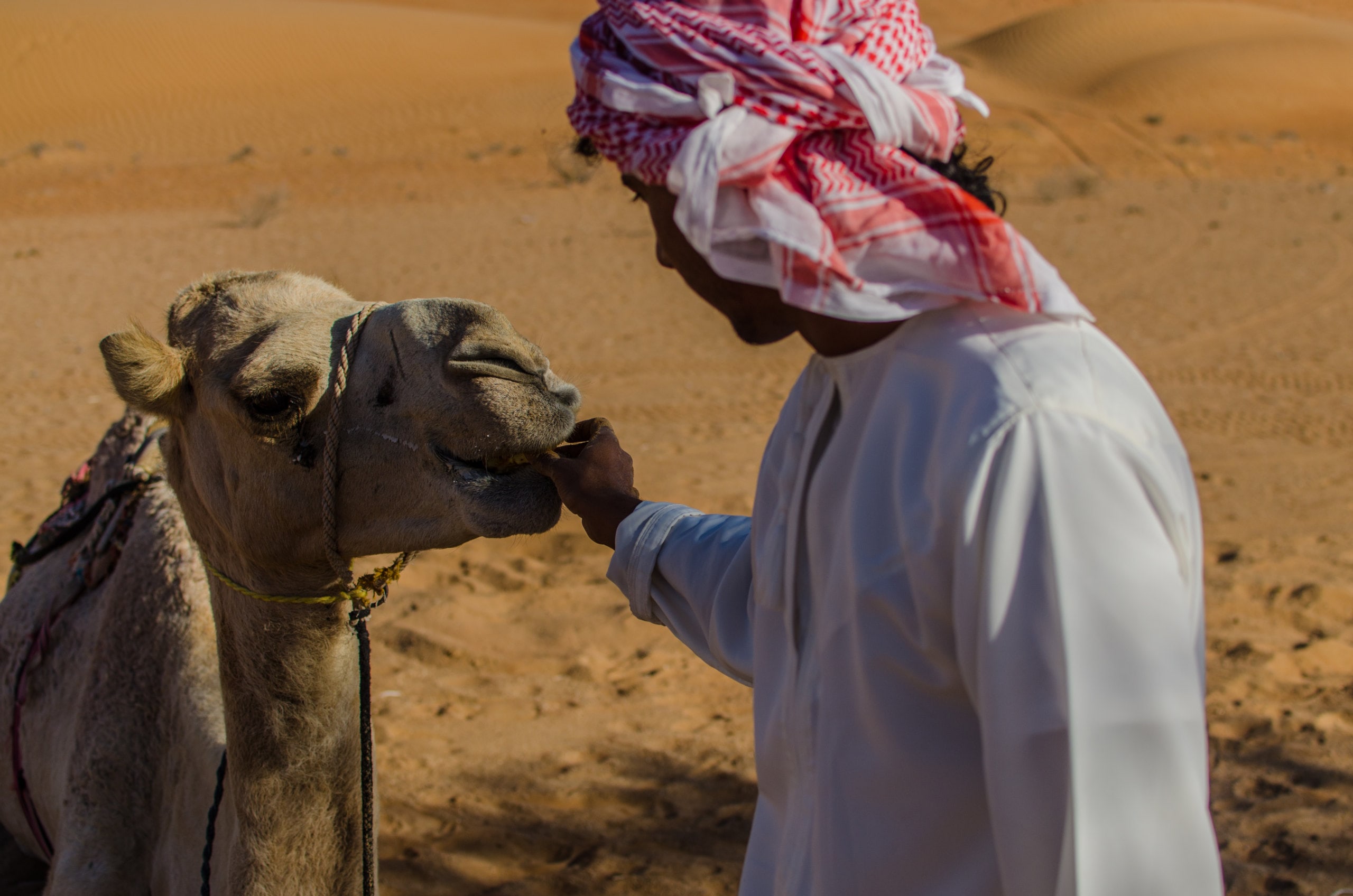 After a couple of hours Humeid helped me slide down off my camel, and we walked for a while, him pointing out the tracks of birds, snakes and desert foxes, me trying to persuade Tabian to follow on obediently rather than stopping to munch on the rare tufts of desert greenery. Back in the saddle, Humeid demonstrated how to lean forward when going up steep dunes and lean back when coming down them. Down was particularly terrifying, my heart beating fast and my fingers gripping Tabian’s fur as he lurched left and right. The ground felt a very long way down. Stopping for lunch in the middle of a flat dusty plain home to the only trees I’d seen all day, Humeid put the camels out to graze, binding their ankles with loose rope cuffs to stop them from straying.

On the way back to camp, the peace was suddenly broken by the roar of engines, shocking after a day of such stillness. A couple of quad bikes appeared at the top of a dune, cut down and across it, then disappeared again back over the peak. The noise took longer to subside, but finally it too was gone and we were left once again with just the soft thwack of the camels’ feet on the sand as a soundtrack to our ride.

That night, I showered off the sand and camel smell in a tiled bathroom that was open to the stars, as Humeid put the camels out to pasture. The next morning I would be swapping one form of Bedouin transportation for another, rumbling across the dunes in a 4×4 vehicle on my way out of the desert and back to the bustle of 21st-century life.

As the desert road turned first to gravel, then tarmac, and the wide open landscape gradually became the outskirts of an unlovely town, I struggled to recall the sense of peace and stillness I’d experienced in the camp. But then, pushing my foot on the accelerator pedal, I felt the crunch of desert sand between my toes and I was right back there again

A holiday in Oman can entail sailing past the khors of Musandam, camping in the desert of Wahiba Sands, and staying in some of the world’s most luxurious hotels.

Want a weekend that wows? Then switch off the TV and head to the airport. We asked the designers at Lightfoot Travel... 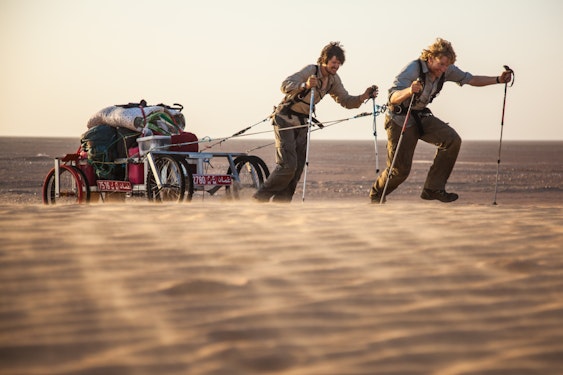 TREKKING THE EMPTY QUARTER IN OMAN

Adventurer Alastair Humphreys and his friend Leon McCarron followed in the footsteps of Thesiger and hauled a homemad... 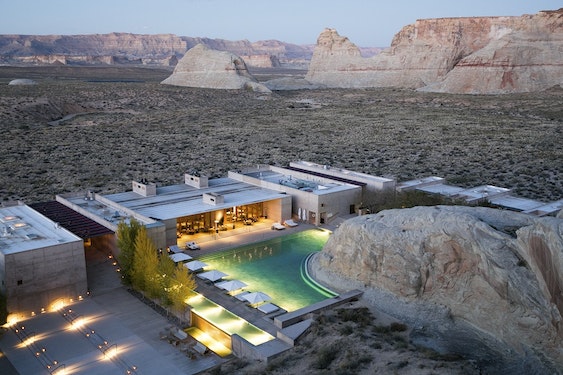 BEST HOTELS IN THE DESERT

Spend the night between the dunes