The morning chill has faded and the sun is out. It’s T-shirt weather here in the remote town of Sainshan, in the middle of the Gobi Desert, Mongolia. I’m crouching, centre-stage in an outdoor sports arena, in front of passionate crowd, face- to-face with a stocky, muscle-bound, mountain of a man. He’s a living, breathing Monglian wrestler sporting a collarless shirt, bare chest, small tight fitting briefs and long leather boots. I’m a skinny guy from London wearing my gym T-shirt, shorts and a pair of scruffy trainers. And he’s glaring at me. Somewhat incredibly we’re about to enter into man-to-man combat. There’s nowhere to run now, nowhere to hide, (as the song goes). And what was a surreal morning has suddenly become a very frightening clear and present reality…..

So what has led me into this spectacularly unlikely scenario? Well let’s start with my fascination for the country of Mongolia itself ever since childhood and indeed with Genghis Khan, arguably the most feared and greatest warlord of all time. Born into a nomadic family in the 12th century, after a tough childhood, his ruthless approach led him to conquer vast swathes of Asia and Persia and his successors everywhere from Beijing to the Balkans.

After the end of communism in Mongolia and the decline of the Soviet Empire, the legend of Genghis Khan has been revived in recent years but looking at the gruff exterior of many Mongolian men, I doubt if it has really gone away. Khan epitomises unflinching masculinity and a never-say-die attitude that still inspires every Mongolian boy even as the rest of world accelerates into a globalised and celebrity-obsessed mush. 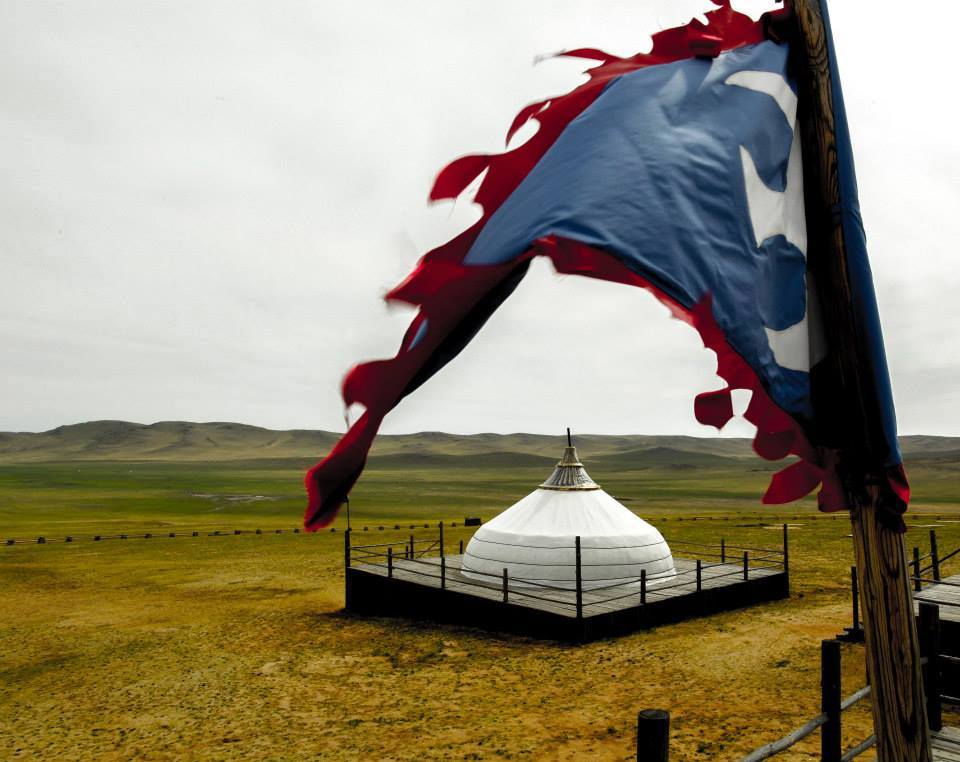 So having paid homage to the 40-metre high statue of Genghis Khan, coated in stainless steel, just outside the country’s capital, Ullam Bator, I boarded the famous Trans-Siberian Express and travelled for five hours through sparsely populated, semi-arid scrubland to arrive at Sainshand. I’m met by a bleak but mesmerising landscape where the atmosphere is unusually festive.

That’s because at this time of the year, late summer, the whole country celebrates the three day nomadic festival of Naadam, an event that dates back to the third century BC and is regarded as the Mongolian version of the Olympics in ancient Greece.  All around Mongolia, different regions stage competitions, eagerly attended by local communities, which are headlined by the so-called “three manly skills”: archery, horse-riding and wrestling. I’ve got an afternoon and evening to physically and mentally prepare before my event, the wrestling, starts the next day.

My first port of call is a much-needed training session with a 25-year-old man of few words called Iderhuu. I meet him at the yurt he shares with his delightful wife and young children. Inspired as a boy by his grandfather, Iderhuu tours the country as a professional wrestler to compete in different provincial contests and he tells me every victory bestows his home town with glory. The yurt is decorated with medals and statuettes he has won along the way. Briefly I daydream about my return to Shepherds Bush in West London as an all-conquering hero, if by some freak I win my bout the next day.

So down to the nitty gritty of the art of combat. Iderhuu is a mountain of a man with a sturdy belly that enhances that all- important low centre of gravity. You lose a fight if you fall to the ground or if anything but the soles of your feet or your hands touch the floor and for once I regret my sessions in the gym back in the London doing repetitions of sit ups and the plank to try and lose pounds around my girth. What’s more there are no weight divisions in Mongolian wrestling, so quite simply, the bigger you are, usually the better you fare. 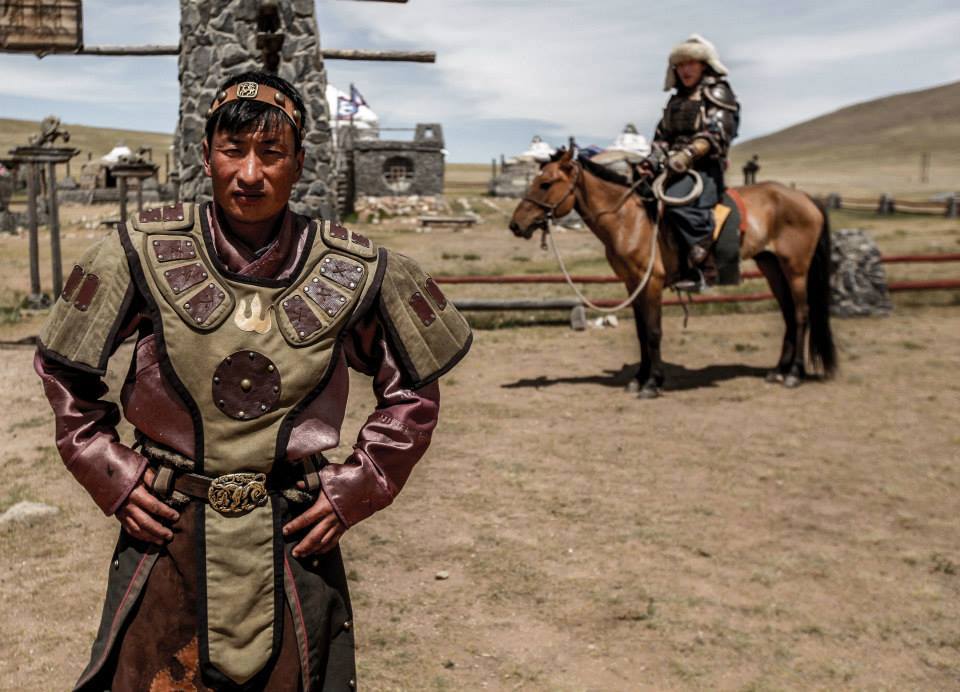 Before we start Idra demonstrates the traditional eagle dance that involves running in a tight circle, arms spread wide. It certainly puts the wind up me. We go into a crouch, grab each other’s shoulders and Idris then shows me the technique of trying to lift an opponent’s arm and leg to dislodge him. I flail about but it’s a mismatch of mammoth versus mouse. Idra’s left thigh alone probably weighs more than my entire body. He puts me to ground several times in between fits of laughter and I’m beginning to feel rather dispirited.

But then we latch onto a technique that may just delay the inevitable. I duck under his arm and cling on to his leg for sheer life, temporarily disabling him. He grins, compliments me on my technique and advises me to stick to that tactic the next day. I feel like I’ve done the equivalent of tickling a giant’s tummy but hey, it’s something.

The next morning I wake up and attempt to put myself into a Buddha-like trance of serenity at a nearby ancient site of spiritual energy. The we head for the stadium alongside local families bedecked in their finest colourful traditional attire. After the pomp and pageantry of the opening ceremony and procession – rituals that I suspect have hardly changed in hundreds of years – the wrestling begins. In total 128 wrestlers participate over successive rounds of elimination. Four fights take place simultaneously on a marked out patch of grass.

To make up the numbers some local soldiers have also entered the competition. Leaner and wirier than the professional wrestlers they look extremely nervous which hardly improves my own morale.  There is a clear hierarchy among the wrestlers with the big guns in their shiny dressing gowns and hats with red strips, preening themselves in the canopied changing area. The more yellow lines on these red strips the higher their ranking apparently. My erstwhile mentor, Idra, is there too, quite clearly a kingpin himself. I nod hello and good luck – “Amjut” in Mongolian. He nods back. This is Alpha Alpha male territory. 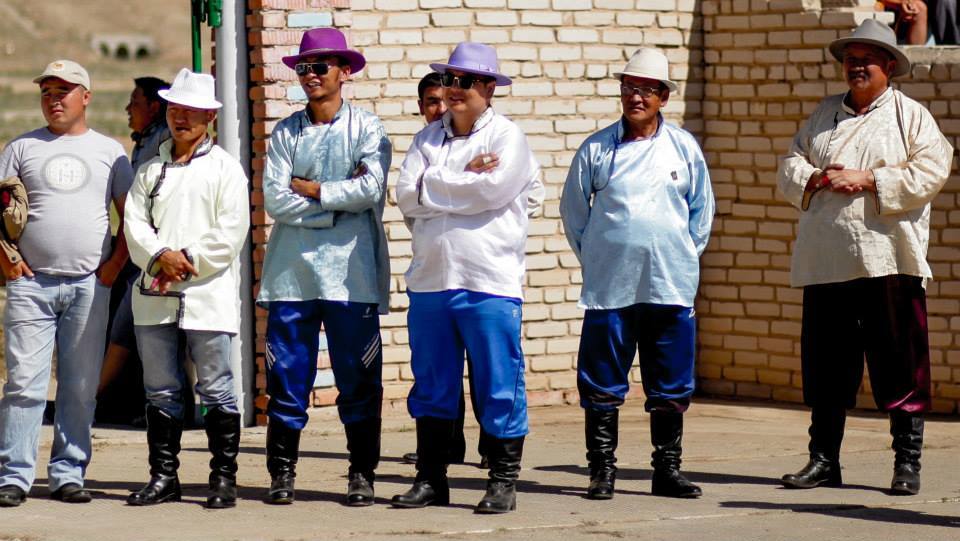 I search for the warrior inside of me but he seems to have gone AWOL at the moment somewhere in the pit of my stomach.

As I limber up for my own tussle, I watch one of the soldiers ruthlessly toppled within seconds by Idra. He doesn’t get up from the ground and as his opponent performs the eagle victory dance, he remains prostrate, grimacing. His shoulder has been dislocated.

And now it’s my turn. My stone-faced opponent and I bow and I’m gripped by a sudden burst of grim courage.  I’ve got one move up my (T-shirted) sleeve and I’m going to stick to it. We circle for a few seconds and then I attempt to go under his left arm and grab behind his knee. A few more seconds tick by while I grapple around – and I can hear, or do I imagine it, cheers of approval from the crowd for this ridiculously lightweight pretender from the West.

Of course the inevitable happens. Perhaps tired of all this prancing about, my opponent picks me up and drops me over his right shoulder to the ground.  End of bout. It’s expected from the loser to take defeat gracefully – like a man – smile and duck under the outstretched arm of the victor. Having checked all my limbs are in one piece I do just that.

I’m elated. Not only have I survived, not only have I undergone a once in a life time experience but I can retire from this most masculine of sports and with hand on heart, say that I only ever lost one Mongolian wrestling fight in my entire career..…