The rugged African country of Mozambique does not seem like a place where a girl from California would want to rest her head. But it’s Tofo Beach in Southern Mozambique that Dr Andrea Marshall has decided to call home. However, it’s not the wild beaches or tropical palms that have held her interest, it’s what lies underneath the water that captured her heart.

THE FIRST TIME I SAW A MANTA IT TOOK MY BREATH AWAY. IT WAS LIKE THE MOST BEAUTIFUL UNDERWATER BIRD I HAD EVER SEEN,” SAYS DR ANDREA MARSHALL

For it’s in these waters that Marshall not only discovered one of the largest populations of manta rays in the world, but also a new breed. And she’s now on the cusp of revealing a third group of manta rays that until now researchers didn’t know existed.

Marshall saw her first manta ray when she was 17. “I was assisting a film crew in Costa Rica. Everyone else was shooting silver tip sharks at this hot spot and I was trying to keep my bubbles out of shot so I hid behind the group. I saw this manta ray barrelling down on me, but close to the sand. It was so magical,” says Marshall. “I managed to get a couple of photos, which were not very good. But it was such a good treasure for me to have a photograph of the first manta that I ever saw.” What made this so ironic was that the first manta Marshall saw was the giant manta ray, which would be the new species she would identify six years later. 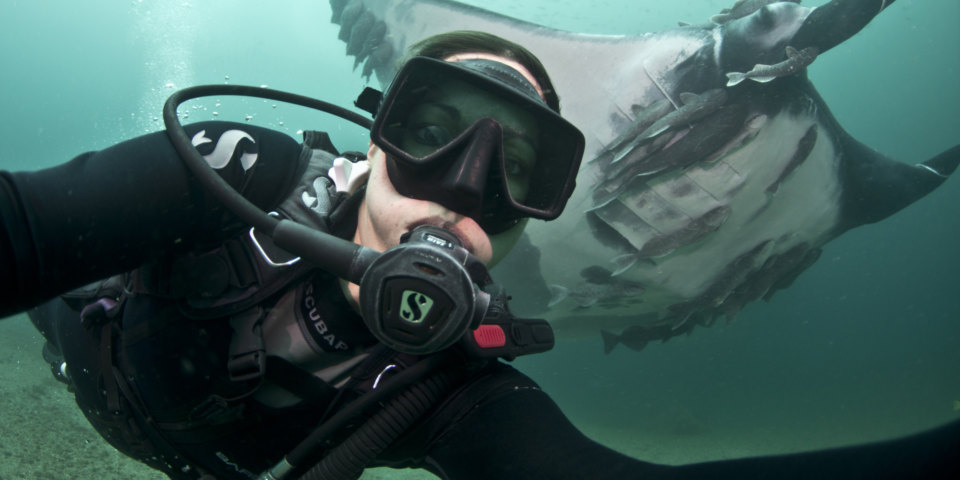 Marshall’s addiction with manta rays didn’t begin until she was a student studying megafauna in Mozambique. Working with a conservation team she had been busy logging information on the animals they came across. Unlike sharks and other such creatures, when it came to manta rays they had to list the animal as ‘data deficient’ as they knew very little about it. Marshall knew that this lack of data would hamper the animal’s chances of conservation as they could demonstrate how serious its plight was so she decided to start filling in the gaps and find more about their secretive lives.

Marshall started racking up hundreds of dives as she attempted to study the population and document each individual very closely. Until this point it was believed that there was only one type of manta ray. She made notes of their spot markings using them like a fingerprint to name each creature. There was for example, Homer, whose markings appeared to join together to make the face of Homer Simpson on his belly. She also logged their size and then she noticed that they would fall into one of two colours. The unknown researcher was the first person to notice this colour variation. “I was talking to someone about it and they said, ‘Oh yeah, it’s probably a feature for that population,” says Marshall. “But I didn’t accept it I knew that there was something different. As the year passed when I was doing this project I started noticing other differences.”

When she spoke to her departmental head at university about her belief that there might be a new species Marshall says: “He literally burst out laughing”. But rather than give up the young researcher decided to go back to the reef and find more differences. She not only recorded that the new species was a different colour and larger, but also had a bump at the base of its tail. This manta ray was known to have descended from the sting ray and the bump on the tail of this giant manta was the link. It was then that the research community had to agree that Marshall was on to something.

Marshall cashed in her life savings to fund studies. She understood it was going to take her a long time to research these creatures as no one had spent time with these animals in the wild before. She travelled around the world for the next two to three years to gather more evidence to show that without a shadow of a doubt it was a new species. “The next time I presented it I had a much more structured argument. I was so motivated to prove them wrong,” says Marshall.

Marshall decided to use this new icon to help bring more attention to rays. From her straw hut in Mozambique she created a research laboratory that would help highlight the plight of what she called the “pandas of the sea”.

Then when Marshall decided to tag the animals in 2009 and find out more about their lives when they left the reef, it was then that she made her next huge discovery. “We thought that it would swim around Mozambique, but it travelled 1,100km moving off shore and dove down 1,400 metres from the surface. People thought that the tag must have been eaten by another animal,” says Marshall. But when they realised that this wasn’t the case there was a rush to record Giant Manta Rays on the migratory act as they were getting into unsafe water.

In the relatively short time that Marshall has been studying them she has already seen dramatic changes. When Marshall first started working in Mozambique 14 years ago, the water was so rich with wildlife that it could have competed with the Galapagos, but now the ray population is almost obsolete. “[Nearly every time] we would jump in the water, we would see animals – up to 40 at a time. But now we’ve lost 90 per cent of the population – it’s a devastating reality for us. We have to hunt for them now. It’s a stark reminder of what we’ve fighting for.” 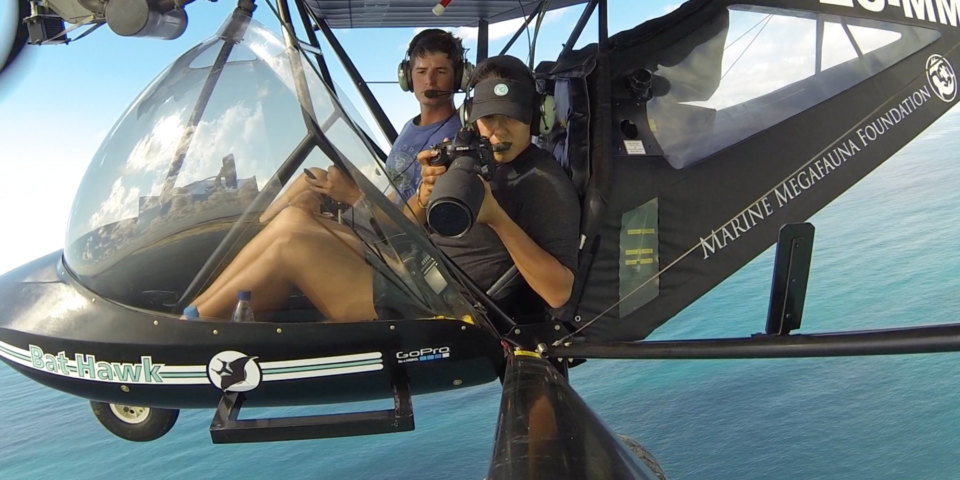 The dramatic loss, says Marshall was due to two things happening simultaneously: “There was a boom for manta ray gill plates in China as they wanted to use them in a medicinal tonic. And post-civil war Mozambique started receiving information from other countries such as Tanzania and South Africa about how they could change their fishing methods from hand lines to what they saw was more efficient – the gill nets.”

Marshall and her team are now busy campaigning against the use of the gill nets and working with government to boost tourism in the region. Marshall’s team put together a huge economic study to show the government the value in protecting mantas and make them realise that people will want to come to the country to see and dive with these magnificent creatures.

Marshall now travels the world to track these migratory creatures and try and add more details to her research. “I spend 40 per cent of my time in Mozambique, the rest of the year travelling in Indonesia, Ecuador, Mexico and Florida.” 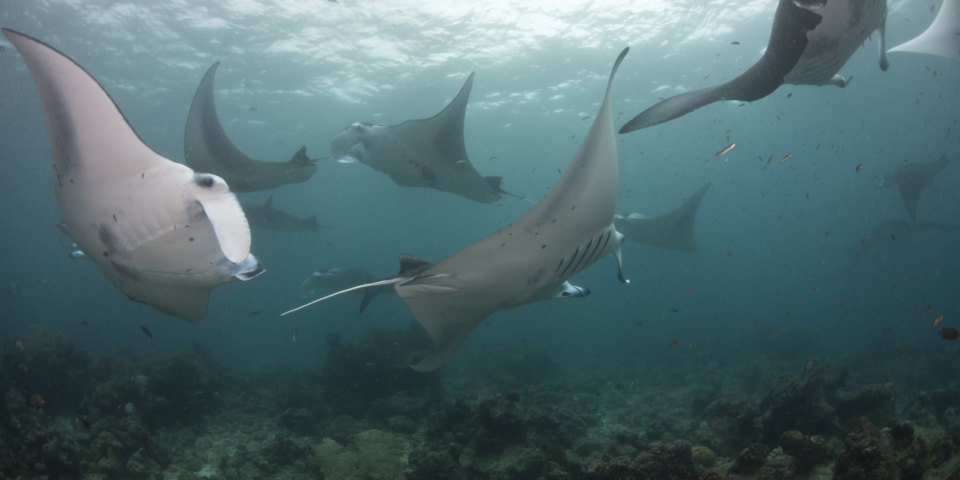 Marshall knows that it will be a slow process and she appreciates any step forward in protecting this intelligent animal. “Truly the best day are when I’ve truly made a difference in an animal’s life. In Ecuador [rays] turn up covered in hooks and lines. They come into this specific island and they hover near the rocks and allow our researchers to remove net and lines. Sometimes it takes 45 minutes and they just lie there.”

In 2011, she had a major breakthrough when manta rays were finally counted as a threatened species vulnerable to extinction. However, she knows that we all have more work to do. “I still marvel at how little we know about our great oceans. Now, more than at any other point in history, we have the distinct opportunity to become both the explorers and the ambassadors of this wondrous, liquid frontier,” she explains.

Mozambique is a boutique destination that combines stunning beaches and a plethora of marine life with opportunities for adventure, culture, romance and more.