by Lightfoot
Mike MacEacheran saddles up to experience part of the hardest road race in Europe, the Tour De France

Visibly leggy and understandably wheezy. That’s how I’m told I’ll feel even before I reach the crest of the revered Buttertubs Pass, a precipitous helter-skelter high road in the Yorkshire Dales and one of the greatest cycling climbs in Europe. “It’ll punish you, make no mistake, especially if you don’t show it respect,” Stuart Price, the owner of the Dales Bike Centre, tells me as he drops-off my rental bike on a blustery spring morning. “Maybe give yourself more time than you think: it’s a tough little blighter.”

Price isn’t wrong. From bottom to top, up and over the denuded, sparse moorland route, in what feels like sub-zero winds, there isn’t much to pick between the burn in my hamstrings and the ache in my knees. My poor calves, stretched and sore by the end of the morning, feel like unset jelly trifles. And it is only the first few hours of a two-day, 100km-long cycling adventure.

Seen on a map, the 4km-long Buttertubs Pass is only a millimetre-sized fraction of the lung-busting 3,664km test put to the world’s greatest road race cyclists – Chris Froome, Alberto Contador, Mark Cavendish and the rest – when they came to tackle it back in summer 2014 as part of the Tour de France. The riders had crossed the channel to England as part of the Tour’s first UK foray since 2007 and their three-day stint in Yorkshire formed part of the race’s centennial celebrations. And, quite rightly, they loved it. 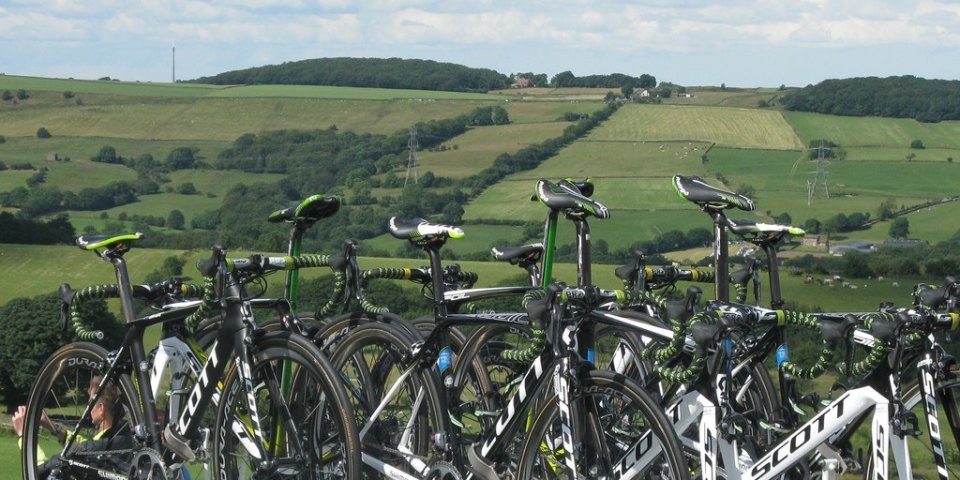 Unlike Froome and co, I have little cycling pedigree. The last time I took a bike out into the hills I was living in Val D’Isere in the French Alps. The scenery would have been enough to draw me out, in particular to the famed Col de l’Iseran, a mountain pass occasionally used on the Tour de France route, but I was lured into the upper valleys by another Alpine pursuit: chiefly sitting on a sun terrace getting fat on cheese. I didn’t require treatment after my summit rides, but left with a sense that I was more comfortable with a Reblochon than a peloton.

I begin in buoyant mood, promised brilliant blue skies by the weathermen, and joined by two cycle-mad amateurs keen to get to grips with road racing at the highest level. And on paper our route couldn’t be simpler: far from a punishing, uncompromising pedal into the unknown we map-out a watered-down, calorific version of the Tour’s first stage circuit planning plenty of stops at farm shops and breweries along the way. For the racing pro, these once quaint country roads are part of the increasingly-popular Tour de Yorkshire each summer. For the car passenger, they are roads that create a daisy chain link between the most beautiful Yorkshire villages, waterfalls and rolling mountain backdrops in northern England. For a novice like me, they are roads that twist and turn like a thrashing snake that’s had its head cut off. 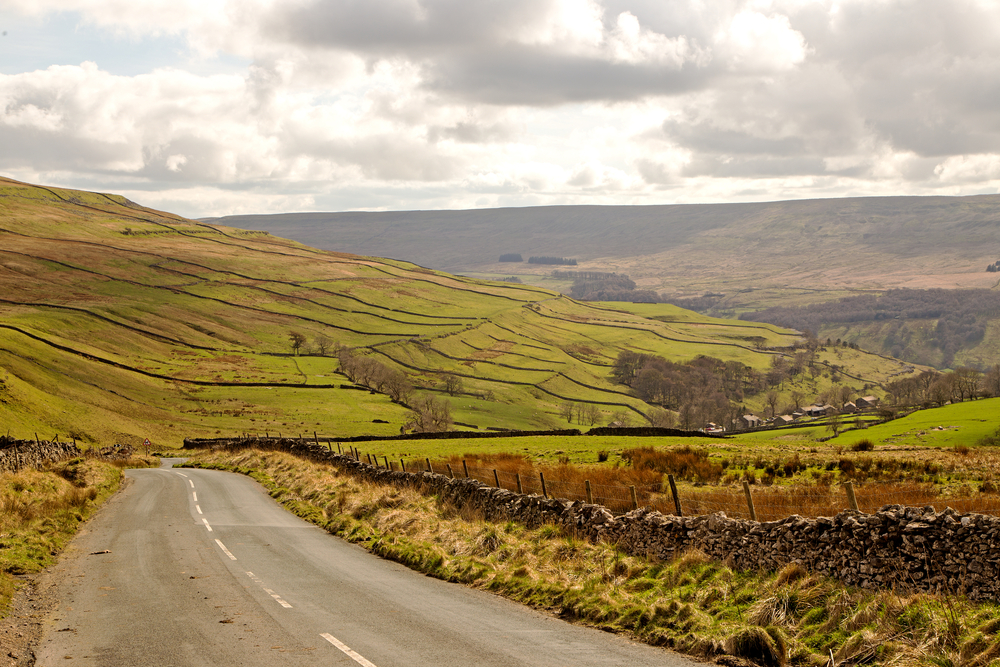 While the pros started in the urban jam of Leeds, our route meanders from the limestone gorge of Grassington, plunging over the impregnable hills separating Wensleydale from Swaledale, to our second climb from Reeth up and over towards Leyburn. Grinton Moor, a staggeringly beautiful if stark heather-strewn pass, is our route south, taking us to through the sheep fields and market towns of Masham, Ripon and Harrogate, the book-end to our adventure.

We roll along, eagerly anticipating each village as we clock up the kilometres. Fleeting glimpses of prickly hills and forested dales catch my eye as I wheel past Bolton Castle, where Mary Queen of Scots was once incarcerated, sweat now dappling my brow from under my helmet. Worton, a speck of a hamlet with no more than a handful of stone houses and a pub dating back to 1698, feels like it is stuck in a time warp. Bainbridge, home of the Dales’ National Park Authority, flashes by in a blur of makeshift fences and puffy sheep. All quaint and bucolic, all worth a scheduled stop if we had time.

By Aysgarth, the awesome spectacle of the waterfalls, patchwork fields, and the Ure River provides the perfect introduction to the rolling pastures and ruddy-faced farmers of Wensleydale and Hawes. It is home to the Wensleydale Creamery, first crafted in the 12th century by a group of Cistercian monks, before finding a series of unlikely latter-day champions, including 1984 author George Orwell and Wallace and Gromit. In order to boost our energy levels before the afternoon’s ride, we demolish four plates of cheese before getting back on our bikes. What’s known as a second breakfast in the cycling world, becomes an excuse for hoovering-up as many calories as we can justify all in the name of exercise. 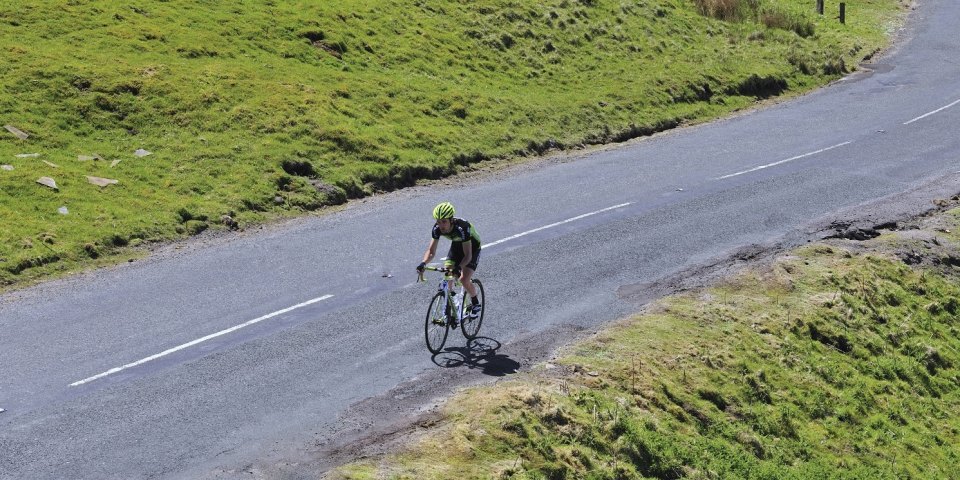 The rest of the day passes in a succession of stretches alongside the River Swale and even more hills than I can stomach, most of which make my puffed-up lungs feel like I’m breathing in sand. The last time this happened was when I was living in Val D’Isere in the French Alps, when one Sunday I foolishly decided to take a bike out for a spin beneath the famed Col de l’Iseran mountain pass. Never again, I thought at the time; and yet here I am again, and only the first few hours into a two-day, 100km-long cycling adventure. Later, as we reach the town of Reeth, and I crawl under the duvet at a riverside hotel, my eyelids droop low like over-burdened panniers. Not even the fact that my saddle-sore buttocks wince, as though pinched by lobster claws, keeps my head off the pillow.

The next day dawns, not with a glorious sunny glow, but with a sterner Yorkshire glower. Regardless we push on into the hills, the click-clacking of gears a metronomic beat to our slow early morning start, before the weather takes another turn for the worse. By the time we reach Grinton Moor, yet another lofty, windswept hurdle, it is shrouded in mist like the opening of a horror film, while the next stage, past Middleham Castle and the ruins of Jervaulx Abbey is equally as dramatic. A backdrop to the War of the Roses, the bloody dynastic struggle between the royal houses of Lancaster and York, it moves us from moor to dale through centuries of dark medieval history. We have only pheasants and blackface sheep for company – clearly bemused by the lunatics in Lycra sailing past in the driving rain – and with the amount of water on the road, it doesn’t fail to escape my attention: we might well be quicker in a dinghy.

Many roads are more exciting for racers than those that chink at the heart of the Yorkshire Dales. That’s something even the hardiest of cyclists can’t deny. But that’s missing the point. The welcome here is warm, the people friendly; the landscapes untamed and wild, the ales just as unforgiving. The spire of St Mary’s Church in Masham appears in the distance, after a final 30km of pedalling up hill and down dale, and my thoughts turn to the prospect of a crackling log fire and a cask-conditioned beer from the Black Sheep Brewery. Now it all seems to make sense; as if clicking into place like my bike gears.

I have pedalled and peaked across moorland passes hard enough to give the Tour de France’s best riders the shivers, and now the clouds start to lift as I near my own personal finish line. In the distance, at the end of the road, I can see the welcoming outline of a Yorkshire pub. It is a moment to savour.

The first stop to kick off this year’s Tour de France is Mont Saint Michel. And the good news is that if you want to live out your Le Tour moment here, it’s is a relatively easy start with a flat terrain. And if you’re not trying to win that yellow jersey you can also do a spot of sightseeing. This UNESCO’s World Heritage Site is filled with Romanesque and gothic architecture. Immerse yourself in everything related to the arts at the Avranches Scriptorium museum. Then for lunch, visit the La Belle Normande on Grand Rue for boulangerie and pattiserie, and La Mere Poulard Café for their well-known omelettes.

The third stop for this year is Granville – another route with no mountains passes and hills. Overlooking the Mont Saint Michel Bay, Granville is also known as the childhood home of couturier Christian Dior. Take inspiration for your next cycling outfit at the Dior Museum, then watch the marine world go by at Roc Des Harmonies aquarium, which is filled with a myriad of sea creatures. For lunch, head over to Alfie’s Wholesome Food on East Broadway for salads and sandwiches, or if you’re craving a protein fix, a Mexican dish from Day Y Noche could be just what you need.

Limoges consists of a bumpy terrain with mountains and hills. But those walking along this route would be pleased to know that Limoges is a place rich in arts, as evident by its art markets. The Limoges Fine Arts Museum is the one stop to go to. After which, head to the Chez Alphonse for traditional French food. For those who would prefer modern fare, Le Cheverny does it perfectly.

Bourg-Saint-Andeol is one of the places with extremely rich history, holding rare testimonies from the post-Roman times. You’ll be pleased to now that there are no mountains and hills in this stage. Popular places to visit include the La Garde-Adhemar, a petite village filled with picturesque medieval houses. And Aigueze, which was originally a castle. Head to some of the best Michelin restaurants in town, such as Le Logis de l’Escalin and L et Lui. 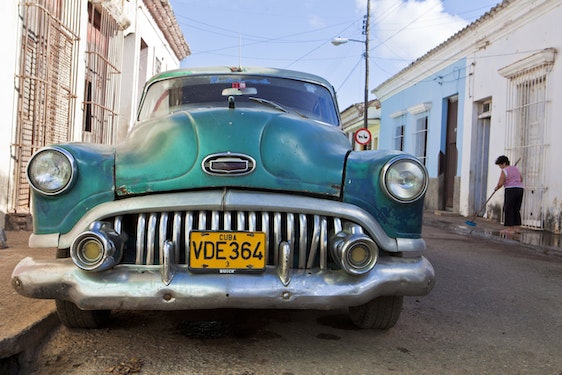