The locals thought that the thin mountain air must be affecting our brain cells. There we were, three middle-aged tourists actually choosing to travel around one of the world’s most mountainous countries on pedal bikes. That in itself was strange enough, but when they also realised that we were being followed around by a perfectly good, comfortable. minibus which we were deliberately not sitting in, they thought we were bonkers.

I found myself beginning to agree with them as we ground up the last kilometre of the 3,390 metre Pele La pass on Bhutan’s East-West Highway, a thin ribbon of hardtop that doodles its way across the eastern Himalayas. And then, once over the top, I found myself agreeing with them once more as we careered down the other side on our Bhutan biking tour.

That descent was like some kind of mad fairground ride, dodging landslips, swerving around yaks, hollering at macaques, and peering apprehensively over a sheer drop-off. Above us, a dozen griffon vultures wheeled, watching hopefully. The vultures probably thought we were mad, too, and yet we were discovering that two wheels were better than four.

In the last decade or so cycle tourism has spread into the furthest reaches of the world, and that includes Bhutan. This method of travel appeals to people who want to stay fit, and also to those who are looking for a bit more insight into a destination than they might get from sitting in a minibus. And for us, in one of the world’s most reclusive kingdoms, the bicycle was proving ideal. 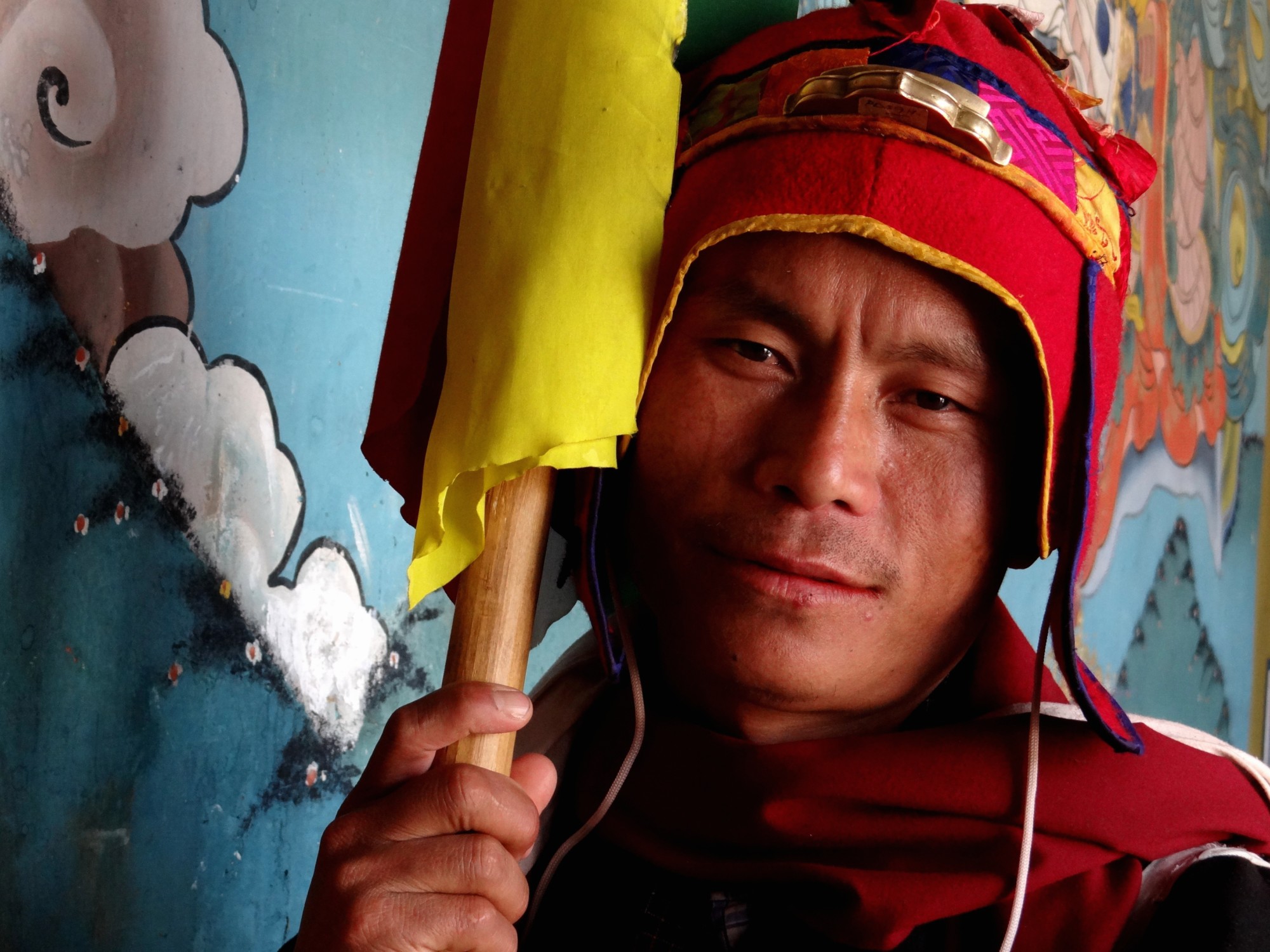 The remote Kingdom of Bhutan, with its population of just 700,000, is an idiosyncratic place. It is famous for bucking the trend of other nations by replacing the usual emphasis on GDP and economic growth with its own homespun policy of GNH – Gross National Happiness – instead. The assumption is that people get more contentment out of living traditionally, off the land, than they would heading for cities to make money.

This is a country that is used to doing things differently. It is a place where the national sport is archery, and the national dish is a kind of goo made up of chillies and cheese. Where a man may marry many wives and where wives may marry several men. It is a country which didn’t have TV until 1999, where Buddhism remains all-pervasive, and the little advertising that exists is commonly addressed to ‘all sentient beings’.

The landscape itself is forever at prayer, and not just because of all the temples, stupas and gompas; hillsides are adorned with stands of tall white ancestor flags, like puffs of smoke; the valleys are filled with water-turned prayer wheels with clanging bells, steadily earning merit.

Above all it is a country in an intriguingly innocent state, having tried and rejected traffic lights, having outlawed tobacco, and having a traditional dress code for its official jobs and educational institutions that means that menfolk, in kho robes, appear to be wearing Scottish kilts, and the women, in kira, look like as demure as Kate Middleton going to work. 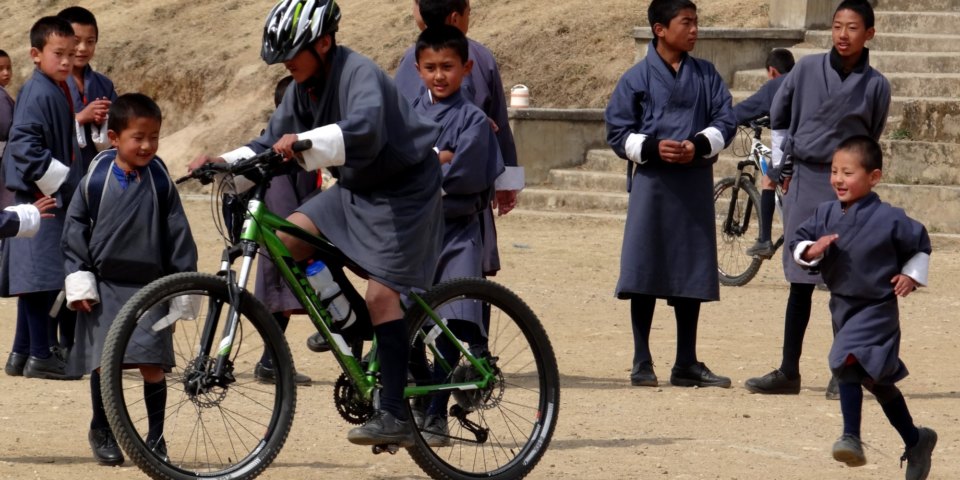 Aware that all this makes it hugely attractive to travellers, Bhutan has pioneered its own approach to tourism, too. A ‘high value, low numbers’ policy means that visas are only issued for guided travel. As a result, visitors tend to come in either one of two main ways: either as trekkers who head off into remote valleys in groups, or as cultural tourists, who get carried from one monastery to the next in vehicles.

Now, however, there is a third way: by bicycle, which brings its own form of cultural immersion. The pedal bike, with its stop-anywhere, smell-anything, hear-everything capability, allows plenty of impromptu interaction with people and places.

On the way up the Pele La, for example, I stopped for a breather outside a high altitude ‘hotel’ – a shack that served rice – and started talking to a young girl who was waiting for her school exam results to come through. Those results would indicate whether she was going to be selected, by the government, for a future career, or whether she’d just stay serving rice.

A couple of days later we met some even younger students when we stopped off at a local school during break-time. The bicycles (which are rare in Bhutan) made great ice-breakers, with every boy wanting to try. Watching the older ones struggle to understand the concept of gears, I thought it was good metaphor for the nation as a whole: maintaining a low gear, but intrigued by faster-forward possibilities.

Despite being on bicycles, our itinerary took in all the big places, starting in Paro – home to Bhutan’s only international airport – taking in capital city Thimpu, ancient capital Punakha, the remote high valley of Gangtey and ending in Bumthang. 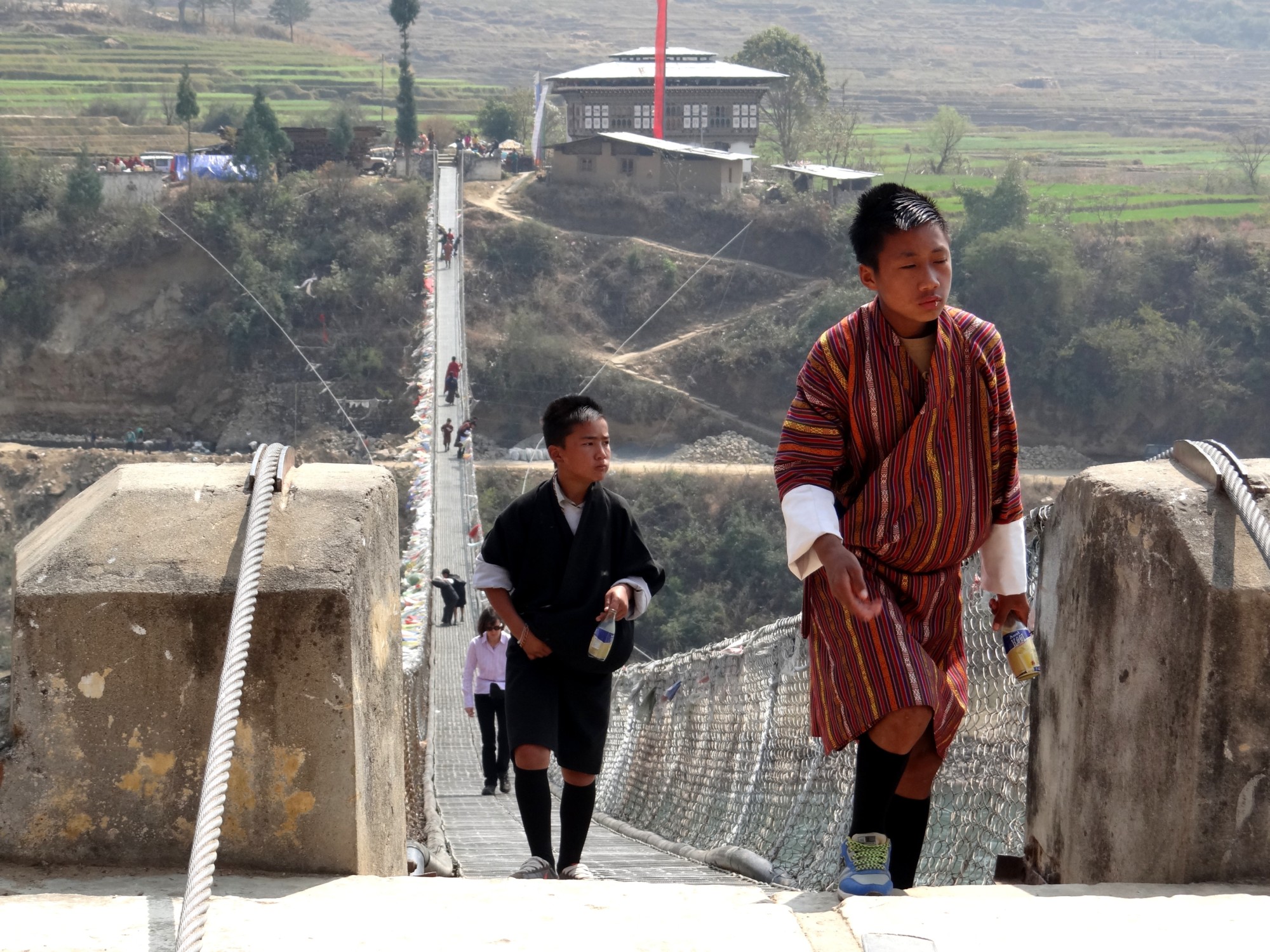 Meanwhile our vehicle was there for quick side trips. It whisked us off, for example, to the tsechu (festival) in Punakha Dzong, a giant riverside monastery from the 17th century. Inside, a dazzling group of animal-costumed dancers was twirling around a sinner brought before the gates of heaven, in a parable watched by hundreds of villagers in spectacular traditional dress.

Of course cycling in mountainous landscapes is not for everyone. You do need to be bike fit, and the thinner air can leave you short of breath. We did encounter some difficult road surfaces, and we did some off-roading, too, particularly on a section high above former capital Punakha, on a switchback trail covered in pine needles. From this height the big metal roofs of the Bhutanese houses made them look like tin tacks pressed into the valley walls.

Fortunately, there’s not a lot of traffic on Bhutanese roads, and most drivers showed us a mix of astonishment and respect – apart from when we were brushed aside by a gleaming white Range Rover, a hugely incongruous machine in such a traditional place.

“Don’t you feel envy?” I asked our guide, gazing after this offensive vehicle. He shook his head. “When I see that I think he is a lucky man who had good karma in a previous life,” he said. “But he also needs to behave well in this one. Otherwise when he is reincarnated next time, he will come back as a worm.”

﻿The Women On A Mission team took to the rivers of Bhuta... 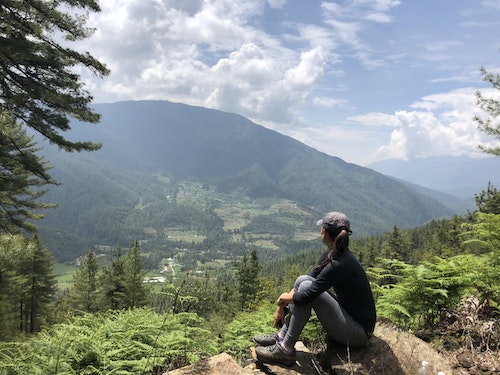 10 REASONS WHY YOU SHOULD VISIT BHUTAN NOW

If you really want to get away from it all on your next holiday, hotfoot it to the country of Bhutan. Two Lightfooter...