by Lightfoot
Theodora Sutcliffe joins the world’s biggest birthday party in Central Java. Each May, Buddhists from all over Asia come to help celebrate Buddha's Birthday by holding four days of celebrations at the picturesque temple of Borobudur

“We're just tourists,” the monk says, laughing. He and two friends have come from Sri Lanka to Central Java to witness Waisak at the UNESCO World Heritage Site of Borobudur, one of the greatest Buddhist monuments in the world. “It's amazing,” he says. “It's built from almost two million stone blocks, with no cement at all.”

Although it's normally summarised as 'Buddha's Birthday', Waisak (known as Vesak in most other Asian countries) commemorates three key events in Buddha's life: his birth, his enlightenment and his passing. And for Indonesia's mainly Chinese-origin, Buddhist community, it's an epic event.

The mysterious Syailendra dynasty who built this serenely beautiful temple over 1,200 years ago are long gone. And their Mahayana Buddhist faith passed with them, replaced by the complex fusions of old beliefs and world religions that characterise much Indonesian religious practice.

In the village of Mendut, a few kilometres from Borobudur, where thousands of Buddhists are preparing for the biggest event in their calendar, almost everyone – from the ladies selling sunhats and the man with a cage of brightly dyed birds to the guys turning out Buddhist paintings and even some of the street dancers – is Muslim. 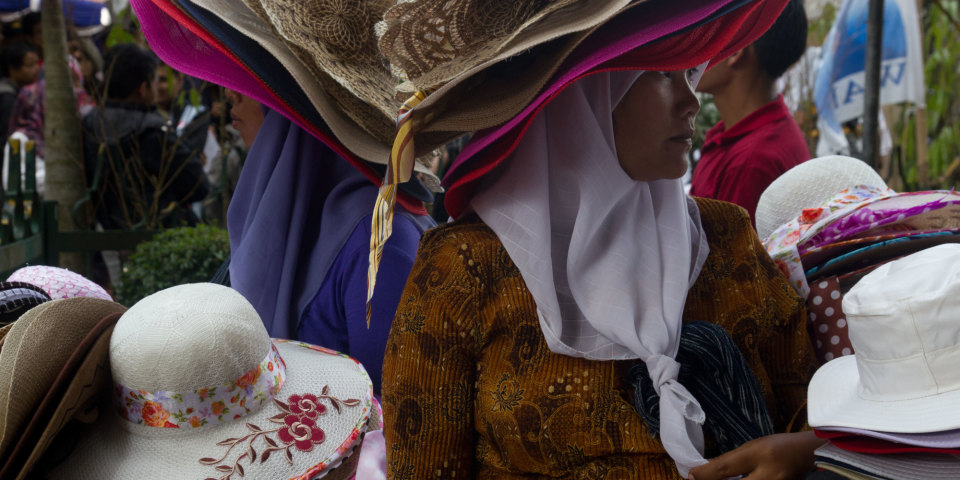 Religious freedom is enshrined in the constitution of Indonesia, the nation with the largest Muslim population in the world. Indonesians must belong to one of six religions – Islam, Hinduism, Buddhism, Confucianism, Catholicism or Protestantism – and profess a belief in one true god. But there’s certainly no tension here: Waisak is the biggest event of the year by far for sleepy Mendut.

I’m here on the day before Waisak, which falls at the moment when the full moon is at its fullest, be that morning, evening, night or even day, in the fourth month of the Buddhist lunar calendar. And the grounds around slabby, stepped Mendut Temple are a riot of brilliant tents.

A myriad Buddhist communities practise their faith in a babel of languages – Tibetan Buddhists in dark red robes, a female Chinese Buddhist priest in pristine white, Theravada Buddhists from Thailand. And representatives of Walubi, Indonesia’s Buddhist organisation, oversee it all. “We’ve been here for a week already,” one high school student from Jakarta tells me, smiling, though she must be tired. 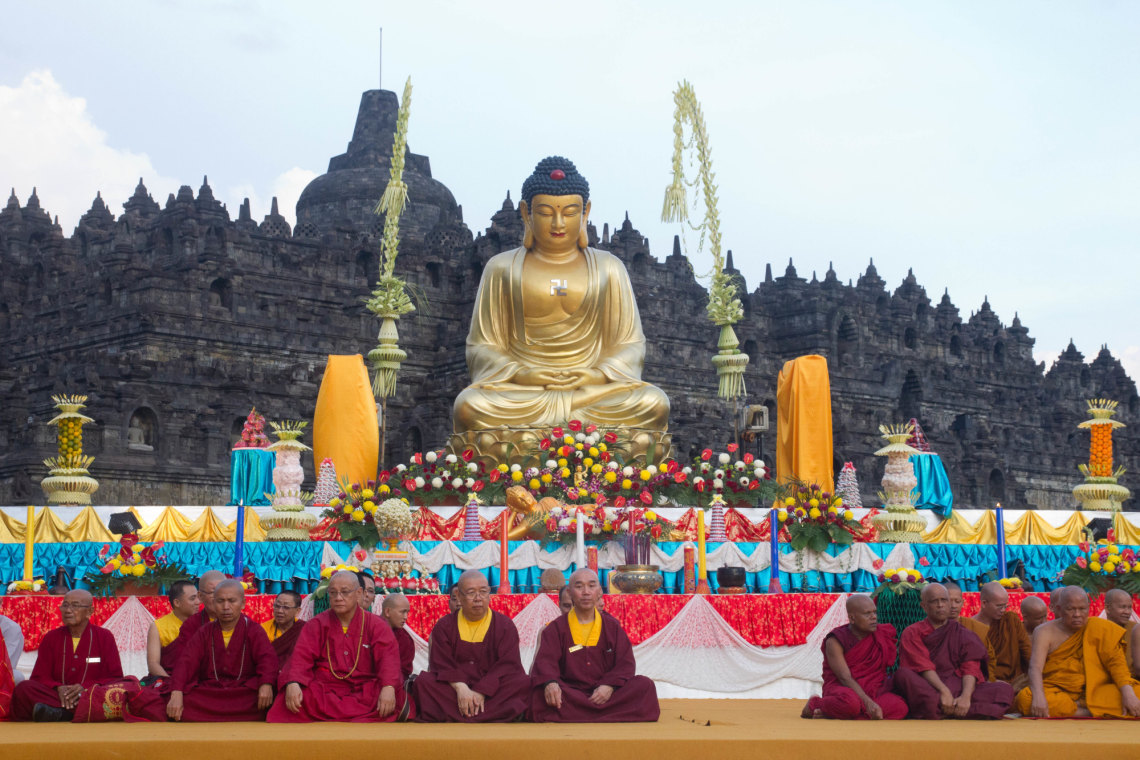 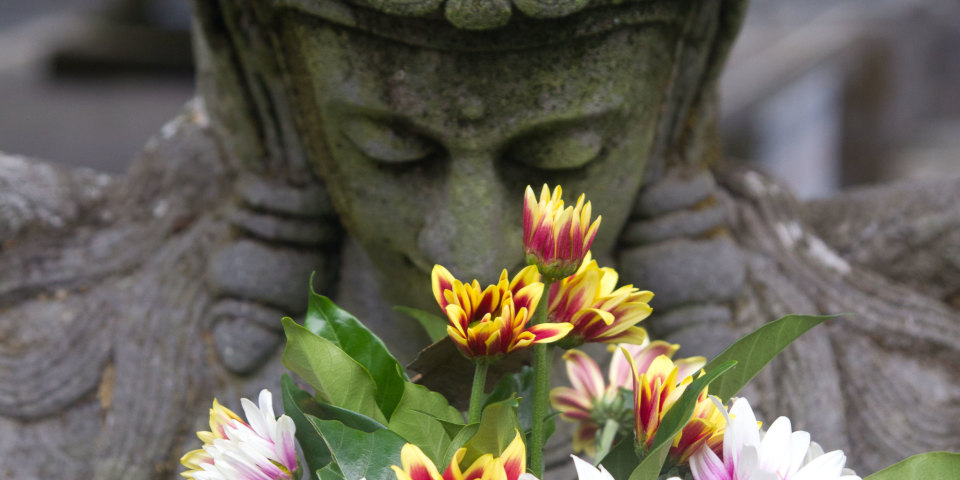 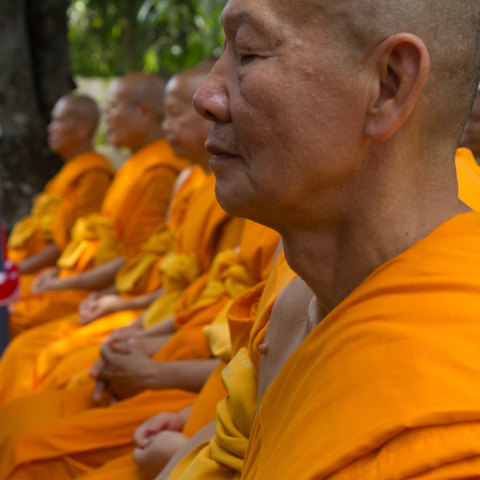 A decorated float arrives, bearing with it a sacred flame. Monks have lit the metal torch from a natural gas flame that burns in the village of Grobogan, Central Java, and drawn holy water from a sacred spring in Umbul Jumprit.

As twilight falls, a torchlit procession walks the short distance to Mendut temple. Following in the footsteps of long-dead Syailendra kings and priests, they ascend the dark stone steps to light candles in the gloom.

The next morning, Mendut is full of activity. Orange-shirted bearers rest below floats laden with Balinese-style harvest offerings, artfully crafted towers of palm and bamboo with sweetcorn, bananas, even carrots. A brass band lines up, complete with baton-twirling cheerleaders. Around noon, police on high-powered bikes clear a way for the procession. And they’re off, on a 4km march to Borobudur itself.

It’s hard not to be awed by the first sight of Borobudur, its towering stupa high on the hill. And, as the procession winds through the pretty park that surrounds this ancient monument, I’m excited to be a part of it. 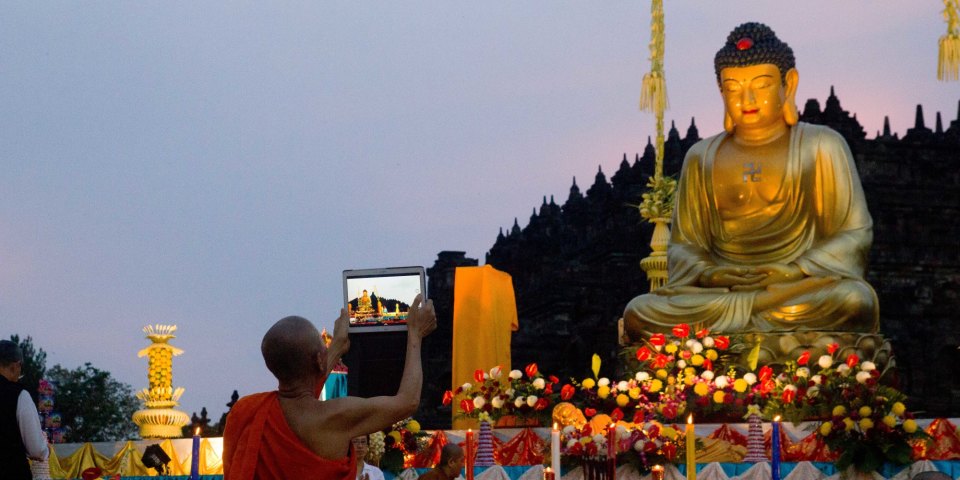 Today, Waisak is such a big event that Indonesia's President, Joko “Jokowi” Widodo, will make a speech. While we wait, there's a lull. People break out picnics, buy coffee, juice cups and cold water from vendors, and nab the best spots on the grass. Guests make their way through tight security to the impromptu auditorium.

A fleet of motorcycle outriders, a whirl of slick black cars, and the police hold back the crowd. As Jokowi waves serenely from the window, and flashes a megawatt smile, the woman beside me breaks into hysterical tears, and pushes against the policemen's restraining arms for all the world like a One Direction fan.

On a grassy meadow, below the temple proper, Thai monks are laying out glass vases, complete with candles. In a ritual adopted from Thai practice, they’ll light and release giant paper lanterns later.

An announcement on the loudspeaker. I have to choose. Stay here and watch the lanterns? Or witness the ritual in front of the temple itself? I ascend, pressed and borne amid a surge of warm bodies, towards the stupa, floodlit to brilliant white.

This is, I think, how Borobudur might have looked on feast days all those years before, albeit by torchlight, not floodlight. Bright silks, candles and vivid flowers deck the altar below a golden Buddha. Representatives of a myriad Buddhist sects sit and chant and meditate. Some of the younger monks, who have been meditating for three days straight now, are visibly tired: ordinary worshippers in the crowd glow with the simple joy of being here.

I settle into the soothing hum of call and response prayers and meditations. And then, for this is Indonesia, there are speeches. Finally, a monk beats a giant gong three times. The moon is at its fullest, and Waisak is here. 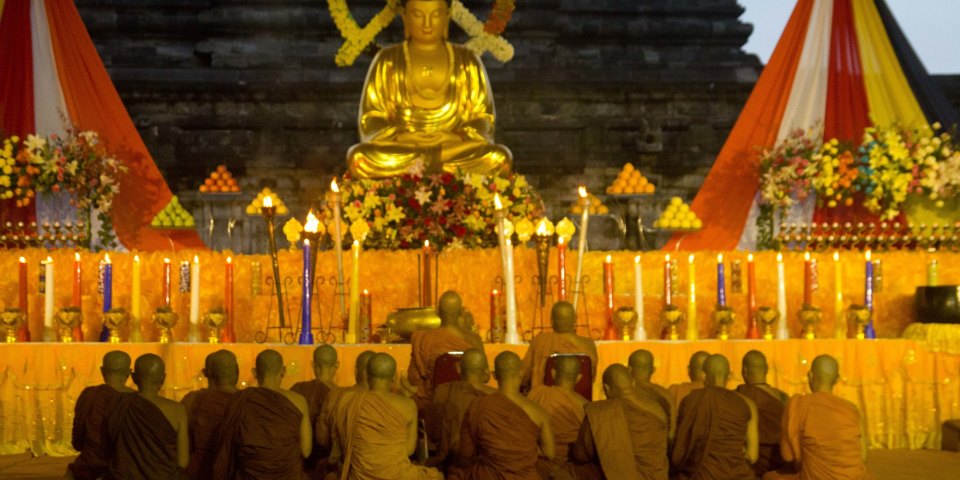 Monks robed in colours from black to russet, from orange to gold, process around the base of Borobudur, bearing offerings of candles and flowers. Illuminated by candlelight, it’s a staggeringly beautiful act of faith.

Only the monks can access the high sanctum. But I join the procession of ordinary pilgrims, and circumnavigate the ancient monument. As I walk, bright lanterns ascend, flickering into the sky, one by one, like souls liberated from the body and seeking new life in heaven.

Groups of young people, faces alive with joy, join hands to open out the billowing paper lanterns, light the kerosene burner carefully, and release them one by one. As they drift above the ancient stupa, they look like soaring stars.

Waisak falls before dawn on 22 May 2016: arrive on 21 May to see the main parade, the ritual at Borobudur and the lanterns, or on 19 May to catch the arrival of the holy water and the sacred flame.

From the smouldering peaks of Mount Bromo to the ancient temples of Borobodur, the pulsating capital of Jakarta to the lush fields of coffee plantations - Java is an island that unearths contrasts to be explored at a leisurely pace. 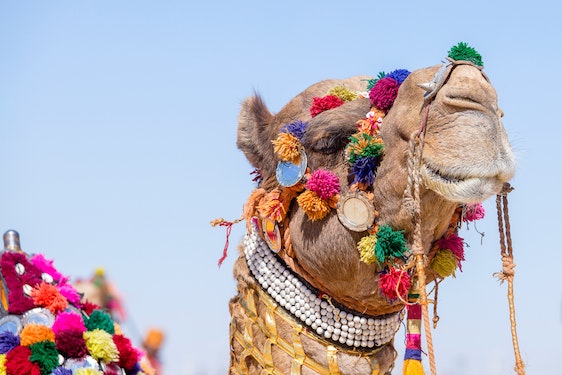 If you are looking for an adventure, head to the dunes