by Lightfoot
Patricia Moore goes off-road in New Zealand for an eco-adventure with a difference.

I tighten my grip on the steering wheel and nose the sturdy 4×4, electric buggy, aka, The Intimidator, through the thick grass, skirting odd, cone-shaped hillocks and jagged rocks. I ease over a ledge and down a bank. The solid, corrugated iron walls of Delta Discovery’s HQ and the straight road back to town and life, as I know it, vanish behind the tussock.

Now, I’m in a strange, new world. I’m down in the Dart River Delta. I’m deep in the path gouged out by a glacier 18,000 years ago at the southern end of Lake Wakatipu, in the South Island of New Zealand. It’s a spectacular, but surreal, landscape. Behind me, sharp-peaked mountains tower, stark and white, against the winter sky. On either side dark, snow dusted hills slope down into the bush. Ahead, a broad, undulating bed of grey stones stretches away to the horizon. Through it the ice-blue strands of the braided Dart River race down to the lake. It's the perfect place for an adventure in New Zealand.

There’s no sound but the rattle of the stones, the eerie whisper of the wind and the low murmur of the river. There’s no sign of any other living soul. Thick grey clouds scud across the sun, throwing fast-moving black shadows on the earth. Giant driftwood logs crouch on the stones. The light has the ethereal, silver glow of the virtual world. But the snow-chilled wind that stings my cheeks is painfully real and The Intimidator’s steering wheel is solid in my hands. 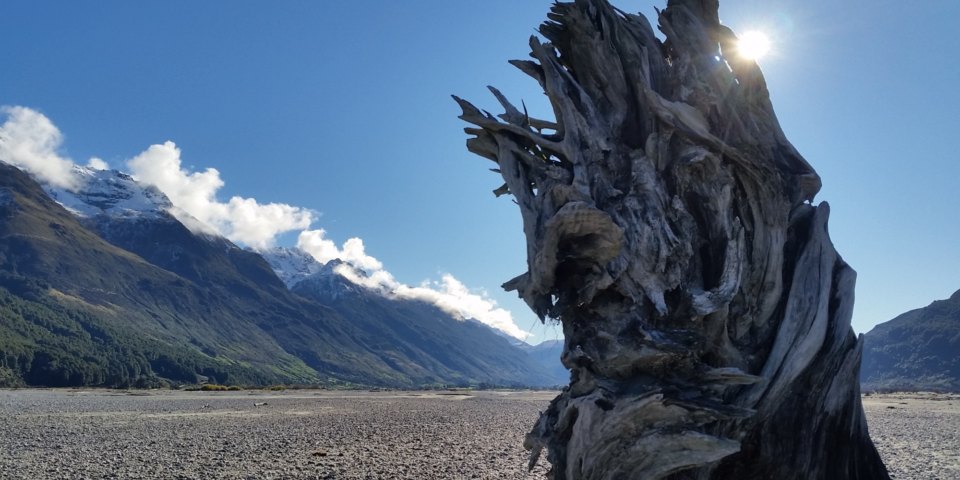 My route through this vast, empty land is marked only by discreet orange fluoro dots on the driftwood. My lifeline is an interactive GPS. My map is a glowing white line on the dashboard tablet. My guides are on-screen icons – one to keep me on track and another to activate the delta’s stories.

I spot a flash of orange on a log a little way off and keeping my car icon steady on that vital, white, on-screen line, I set off towards it. The river rushes along beside me. A huge tree, rolling on its surface like a matchstick, the boulders tossed along its banks, the ridges of shingle and the pools trapped high among the stones, are testament to the force of the Dart.

The story icon pings. I tap twice to listen. The Dart was named by English settler, William Rees, for its speed and its power. Millions of tiny, unseen insects live along the delta. Migratory birds from far-off countries shelter here on their journeys north or south and the faithful Paradise duck, which partners for life, calls it home.

A text pops up at the corner of the screen. It’s Andy at Delta Discovery. Lost in the story of the Dart and its creatures, I’ve wandered off-track. I’m too close to the river. I swing left. My car icon edges back onto the safety of the white line. 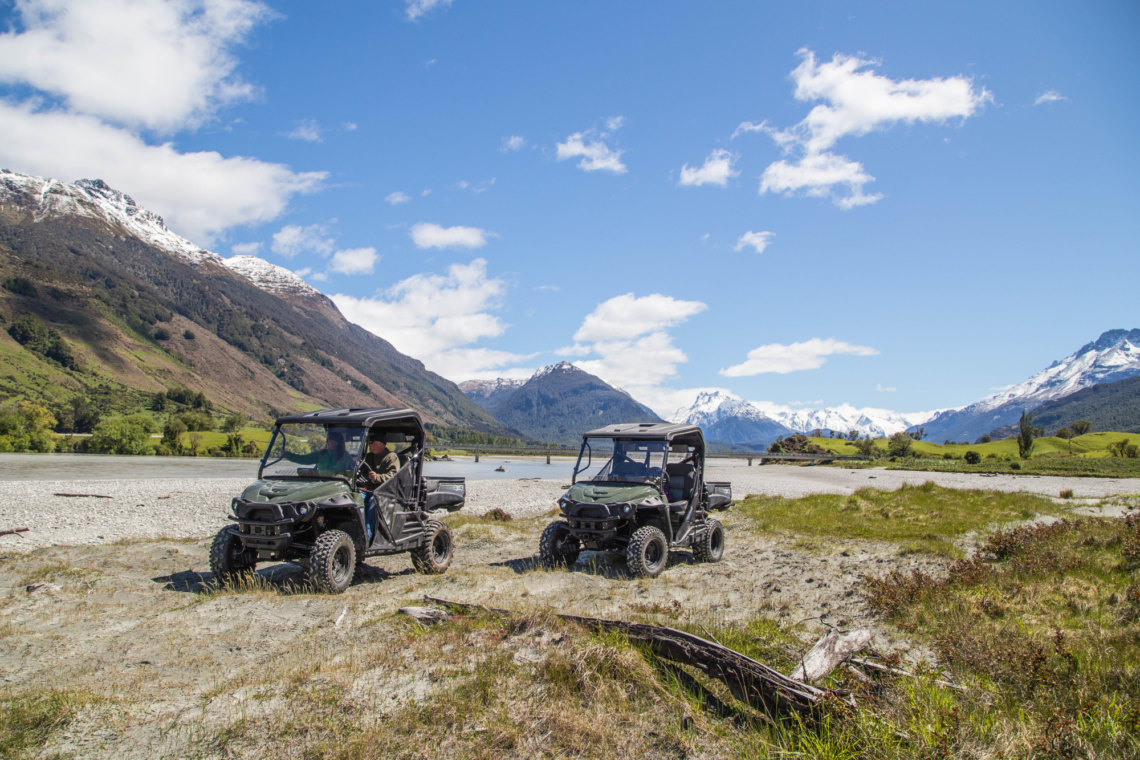 I’m not a serious gamer, but cruising along in The Intimidator, dodging boulders, crunching across the stones, tilting over sandbanks, chasing Delta Discovery’s secret orange fluoro clues, with icons flashing and with a disembodied robot voice telling me stories from another world, I feel the true gamer’s adrenalin rush.

There’s a glint of sun on water ahead.  A stream cuts across my path. Have I strayed from the track? I check the screen but my “car” icon sits steady on the white line. I slam on the breaks. I’m about to text Andy, when he flashes a message telling me to change into four-wheel drive mode and press on. I flick the dashboard switch, take a deep breath and ease The Intimidator into the stream. Water splashes beneath me. The Intimidator powers through and grips the bank on the other side.

The white line curves away from the horizon and The Intimidator points back towards the mountains. I stop to drink in the silence, the solitude and the breathtaking beauty of this dramatic ice-age landscape.  This is ancient Aotearoa New Zealand from the time before time, unmarked by mankind.

Yet, only 150 years ago, my storyteller recounts, miners and prospectors in their thousands crowded at the head of the lake and along the Dart, looking for gold. Their tents and their dredges have gone now, along with the gold once scattered in the river sand. 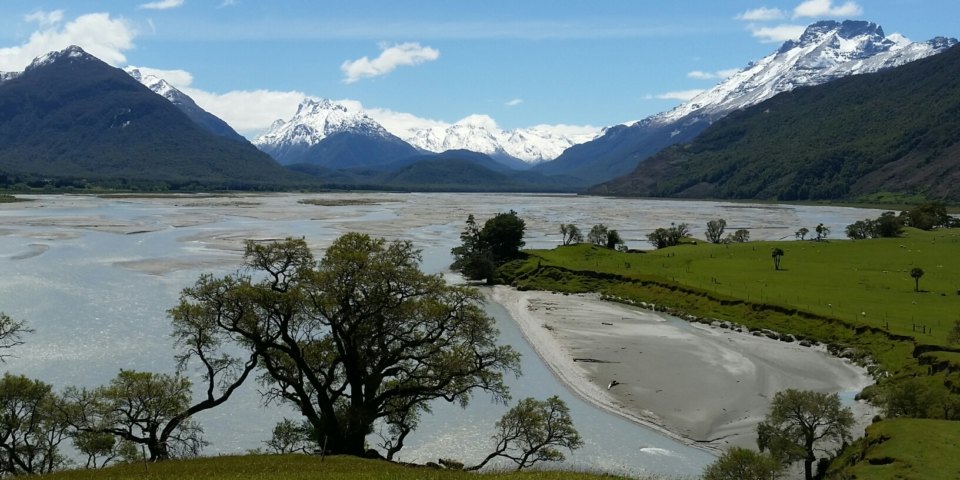 I set off again, running against the Dart. A pair of Paradise ducks rises from the bush. They call to each other as they arrow across the sky and away up the river. I’m in another story now, following the footsteps of the early Maori explorers. I’m on the huarahi, or highway, that led to the precious pounamu or greenstone threaded through the rocks in the Dart Valley, on Mount Cosmos and Mount Earnslaw, or over on the West Coast. There’s no trace now of the greenstone highway. The explorers’ camps, their earth ovens and their discarded greenstone have sunk beneath the stones.

Beyond the Dart Bridge, the strands of the river plait together in a wide, swift-running tide. I skirt an island and pull up. Away, at the head of the valley, lit by a hazy glow, are the Misty Mountains of Peter Jackson’s Lord of the Rings. Between them lies the gap of Rohan and beyond them, at the source of the river, is Isengard.

Like the Hobbits, I have come to the end of my adventure. As I guide The Intimidator away from the delta, I look back. Two faint wheel tracks trail across the shingle. Soon they’ll be gone.  For all its might, The Intimidator treads lightly on the land. There are only two of these, three-person, low-impact, no-emission UTVs in the Delta Discovery Fleet, so tours are small and exclusive.

During my time tracking the river I felt like a real adventurer. It was just me, The Intimidator, miles of raw New Zealand countryside and silence. I felt sad to step out of The Intimidator and leave it behind. For thanks to my futuristic four-wheel buddy I felt as if I’d escaped to a new and different world.

To discover the stunning scenery for yourself, embark on a Lord of the Rings style journey with Lightfoot Travel.

ROWING FROM SINGAPORE TO NEW ZEALAND